A federal judge on Thursday overturned an Obama-era rule from 2016 designed to curb methane emissions from associated natural gas on federal and tribal lands, indicating the Department of Interior (DOI) Bureau of Land Management (BLM) overstepped its bounds by attempting to regulate air pollution. 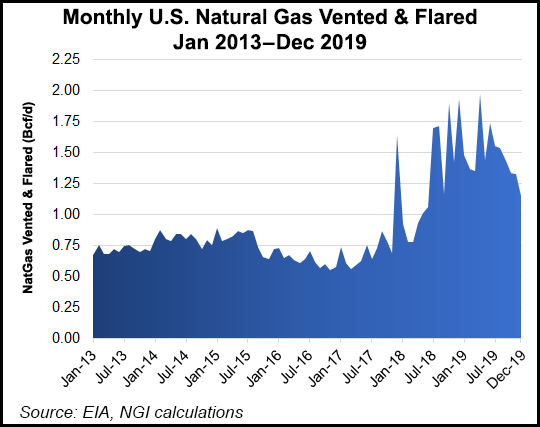 The rule in question is the Waste Prevention, Production Subject to Royalties, and Resource Conservation rule, aka the venting and flaring rule.

The DOI under President Trump has attempted to rescind provisions of the rule in a move that was blocked in July by a California court.

In response, the Independent Petroleum Association of America (IPAA) and Western Energy Alliance (WEA), along with the states of Montana, North Dakota, Texas and Wyoming sued.

U.S. District Judge Scott Skavdahl of the District Court of Wyoming overturned the rule on Thursday. WEA and its allies argued successfully that the Clean Air Act gives the Environmental Protection Agency (EPA) and states the authority to regulate air pollution.

In the ruling, Skavdahl said while the Mineral Leasing Act authorizes DOI to prescribe rules for the prevention of undue waste of mineral resources, it does not give DOI the authority to enact rules based on the “ancillary benefit” of curbing air pollution. The judge said the BLM under President Obama had “acted arbitrarily and capriciously in failing to fully assess the impacts of the rule on marginal wells, failing to adequately explain and support the rule’s capture requirements, and failing to separately consider the domestic costs and benefits of the rule.”

“We are overjoyed that an overreaching regulation has been overturned,” said WEA President Kathleen Sgamma. “BLM can regulate waste of methane, but not put in place air quality controls and regulate existing sources.”

The venting and flaring rule “wildly overstepped the authority given to the Department of the Interior,” said IPAA president Barry Russell. “This rule, which aimed to regulate venting and flaring, was an attempt to create yet another regulatory hurdle for American oil and natural gas producers operating on federal lands.

“We are pleased to see Skavdahl’s sensible approach and rightfully see this as a win for producers.”

The EPA under Trump has also attempted to rescind Obama-era methane controls in a move that was immediately challenged in court by environmental groups, along with two dozen states and municipalities. The EPA rescission has been paused for now by a federal court.

The November presidential election and the pending confirmation of Amy Coney Barrett to the U.S. Supreme Court both stand to have major implications for the Trump administration’s numerous pending legal challenges to Obama-era environmental regulations.

Both Democratic nominee Joseph R. Biden Jr. and his running mate Sen. Kamala Harris of California have said in recent days that they would not ban hydraulic fracturing, a sign that they recognize the importance of natural gas to the U.S. economy and the energy transition.

However, Biden has signaled he would ban new drilling leases on federal property, which accounted for more than 20% of U.S. oil and gas production in 2019.