A federal judge has vacated the Trump administration’s attempt to rescind an Obama-era rule governing associated natural gas flaring and venting on public and tribal lands, citing “myriad inadequacies” on which the rescission was based, including violating National Environmental Policy Act (NEPA) regulations. 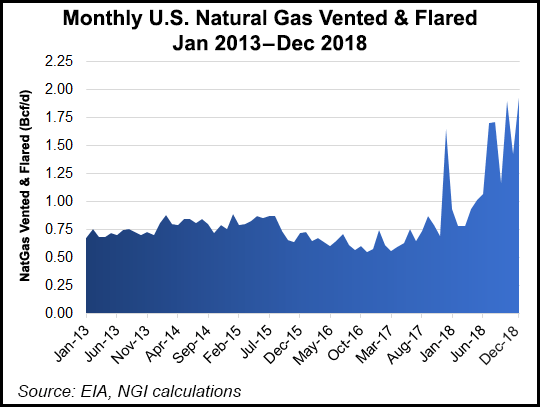 A coalition of environmental and citizens’ groups had argued that the move by the Department of Interior to rescind and revise the Waste Prevention, Production Subject to Royalties, and Resource Conservation Rule, aka the venting and flaring rule, was unlawful because it would revoke “reasonable protections designed to limit waste of natural gas by oil and gas companies on federal public and Indian lands…”

In a final rule issued in September 2018, DOI’s Bureau of Land Management (BLM) said it would rescind provisions of the Obama-era rule pertaining to waste minimization plans, gas-capture percentages, well drilling, well completion and related operations, pneumatic controllers, pneumatic diaphragm pumps, storage vessels, and leak detection and repair. For the remaining provisions, BLM said it planned to return to the regulatory environment that preceded the rule when it was issued in 2016.

In an order issued Wednesday in the U.S. District Court for the Northern District of California, Judge Yvonne Gonzalez Rogers said BLM’s actions in enacting the rescission “demonstrate its unmitigated fervor to abolish a rule that it enacted only two years prior.

“While deference exists as a concept, where the slate is not blank, as here, BLM could not act in a vacuum. Rather, it was required to provide its reasoned explanation for its abrupt reversal as to the findings in the Waste Prevention Rule and to comply with its obligations under NEPA by considering the impacts of its rulemaking on the environment both thoroughly and thoughtfully. Instead, in its zeal, BLM simply engineered a process to ensure a preordained conclusion.”

The court vacated DOI’s rescission of the rule, while allowing 90 days for the parties “to return to the District of Wyoming…[and] to determine next steps.”

“Since the first day they came into office, the Trump administration has sought and failed to undermine the Methane Waste Prevention Rule at every turn — in Congress, through the regulatory process, and in the courts,” said senior attorney Rosalie Winn of the Environmental Defense Fund, one of the plaintiffs in the case. The ruling “shows their efforts are illegal, and provides for the reinstatement of common sense protections that are in the best interest of the American public.”

The court order came hours after the Trump administration announced a final rule updating NEPA regulations that would limit reviews of proposed natural gas and oil pipelines and other infrastructure projects. The rule would modernize environmental reviews, streamline infrastructure approvals and “reverse years of burdensome overregulation and administrative abuse,” the White House said.