A federal appeals court panel rejected an environmental group’s objection to FERC’s approval last year of facilities to carry natural gas from West Texas to Mexico, saying the regulatory agency had fulfilled its obligation to review the project’s environmental impacts. 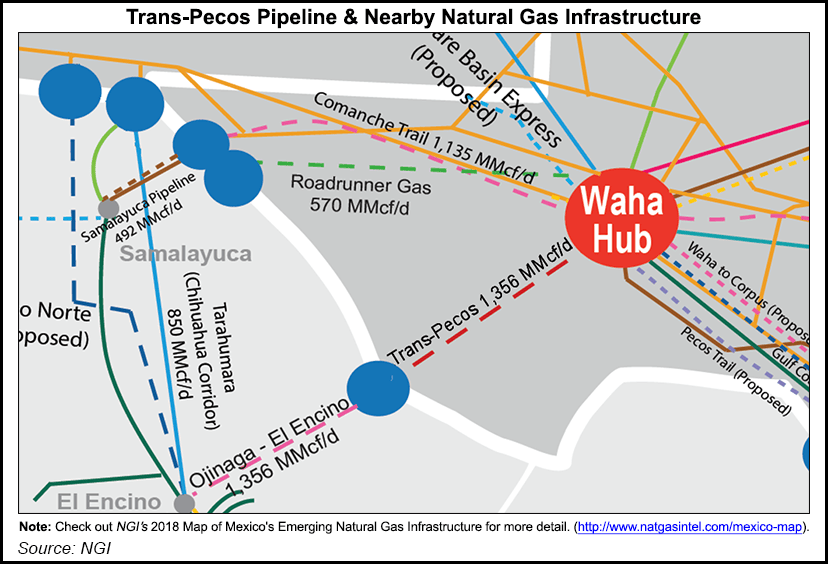 Big Bend Conservation Alliance had petitioned the U.S. Court of Appeals for the District of Columbia (DC) Circuit seeking an expanded environmental review of Trans-Pecos plans to build and operate an export facility consisting of a 1,093-foot pipeline running from a meter station in Presidio County, TX, to the international border, and the 148-mile, 42-inch diameter Trans-Pecos pipeline [CP15-500]. The gas transported would predominantly fuel power plants in Mexico.

Big Bend filed its petition in January, 2017. Trans-Pecos was placed in service four months later, simultaneous with the Comanche Trail, another West Texas pipeline to carry natural gas to the Mexico border.

When FERC authorized the export facility in 2016, it concluded that the pipeline was intrastate only and therefore not subject to Section 7. Even if the pipeline were later authorized to transport interstate gas, its jurisdiction would extend only to that service and would not trigger Section 7.

In a decision issued Tuesday, the court rejected Big Bend’s argument that Trans-Pecos is an interstate pipeline subject to Section 7 and that it should have been subject to NEPA review even if it were not subject to FERC’s direct regulatory authority [No. 17-1002].

“In sum, substantial evidence supports FERC’s finding that the Trans-Pecos Pipeline is a non-jurisdictional intrastate pipeline subject to regulation by the State of Texas,” the court said. “We affirm its refusal to exercise jurisdiction over the pipeline.”

Big Bend Conservation Alliance, other environmental groups, including Sierra Club, and landowners, concerned about the project’s impact on the Big Bend National Park, have fought to block Trans-Pecos since construction began three years ago. Project opponents appealed to the Commission to produce a more rigorous environmental impact statement for the entire pipeline, not just an environmental assessment for the jurisdictional border crossing.