Production and capacity issues in Algeria and Nigeria could impact future natural gas pipeline and LNG exports to Europe, complicating buyers’ hopes that contracted supplies can help bridge the gap caused by the shutdown on Nord Stream 1. 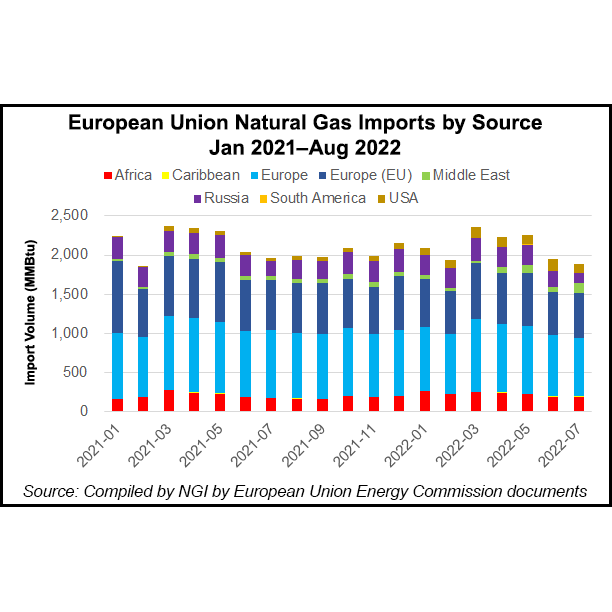 Liquefied natural gas is projected to meet about half of Europe’s gas demand through 2030, according to a recent Rystad Energy analysis. Europe has been scrambling to meet that demand by securing more spot cargoes from major exporting countries like the United States and Australia. However, competition with Asian buyers and a lack of major capacity additions within the next few years have forced European buyers to seek new and expanded partnerships with countries like Algeria and Nigeria to boost future supply resources.

Nigeria is Africa’s largest LNG exporter, but repeated production outages and underinvestment over the past decade have seen gas and oil exports decline since 2020. Nigeria’s LNG facility at Bonny Island is operating at less than 70% capacity.

Since June, “Nigeria LNG has been producing at about between 60% to 68% utilization,” Nigeria LNG managing director Philip Mshelbila said recently. “In other words, roughly 35% of our capacity is empty…There are many factors, but the biggest one of them is crude oil theft. If we don’t address this, we will not get out of this quagmire that we are in.”

If Nigeria were unable to meet its supply obligations, Portugal might face supply issues this winter, according to Environment and Energy Minister Duarte Cordeiro. In 2021, Portugal imported 49.5% of its gas from Nigeria and 33.3% from the United States.

The Nigerian government has reassured Portugal about supply volumes, but Cordeiro said “there is a risk” that it may not meet its obligations.

Meanwhile, Italy’s Eni SpA is repairing a gas leak at its Nigerian Ogboinbiri-Ob pipeline. Production data from Eni showed the incident cut the firm’s gas exports from Nigeria by 5 MMcf/d.

The European Union has also been exploring infrastructure and export partnerships with Algeria, resulting in a series of supply deals with Algeria and other African and Middle East countries in July. In April, Algeria also agreed to a separate deal with Italy to supply 9 billion cubic meters (Bcm) of gas from November until the end of 2023, in addition to previous contracts.

Algeria is Europe’s third largest gas supplier, and nearly 85% of its gas exports are designated for Europe.

Algeria and Nigeria, along with Niger, have also revived plans to build the 2,485 mile Trans-Sahara Gas Pipeline. The system would connect Nigerian gas to Europe via export from Algeria. The $10 billion project has yet to be sanctioned. Algeria’s state-owned Sonatrach in January said it would invest $40 billion between 2022 and 2026.

However, American University’s William Lawrence, a senior professor and MIddle East expert in the School of International Service with expertise in North African and Middle East affairs, told NGI that capacity increases are unlikely to be implemented quickly given Algeria’s domestic concerns.

“Algeria has the means but it doesn’t necessarily have the political will to do a big robust energy investment when the country has many other issues,” Lawrence said. “Algeria has a potential windfall because of the rise in global energy prices, but will it invest in the country’s energy infrastructure and put more resources into improvements to allow it to meet supply commitments in 2023, 2024, and 2025? The answer is likely not enough.”