Coterra Energy Inc.’s CEO Thomas Jorden called for the government and investors to provide the proper signals in response to an energy crisis “unlike anything the world has seen in almost 50 years.” 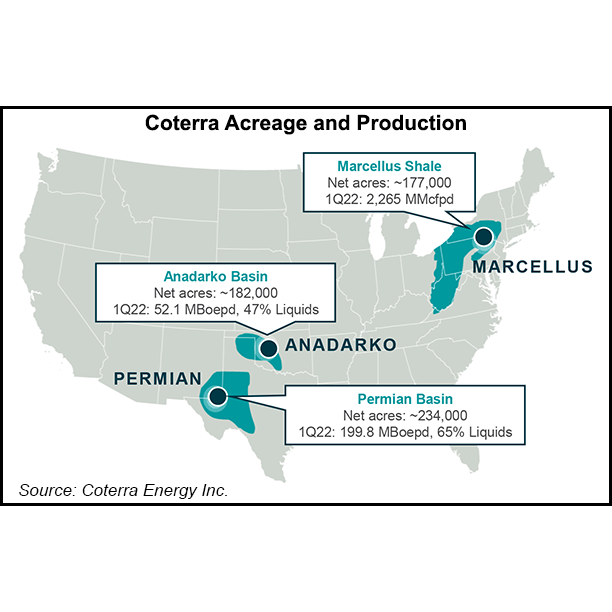 In order for the U.S exploration and production (E&P) sector to “respond with increased U.S. supply, we need well-thought-out regulation and policies that encourage responsible resource development and infrastructure build-out,” he said. “We need pipelines, which will take new legislation and cooperation from all stakeholders, including federal and state legislature and regulators, as well as the American public.”

He added that “we need our investors to respond and encourage responsible growth.”

Jorden spoke last week on the company’s earnings call. During the call, executives reiterated a mantra being heard throughout the oil and gas producer community – that they are committed to capital discipline and returning cash to shareholders even as commodity prices skyrocket.

Coterra said it had returned 69% of first quarter 2022 free cash flow (FCF) in dividends and share buybacks to its shareholders. At the recent commodity strip, the company’s full-year 2022 FCF is now seen hitting $4.5 billion, up from $3 billion previously.

The E&P company’s average realized prices for oil, natural gas and natural gas liquids in the first quarter, excluding the effect of commodity derivatives, were $93.45/bbl, $4.33/Mcf and $37.87/bbl, respectively. Coterra is the product of last year’s merger of independents Cimarex Energy Co. and Cabot Oil & Gas Corp. As such, no comparable figures were provided.

“For the first time in a decade, we are seeing support for oil and natural gas prices that is driven by the long-term fundamental supply and demand outlook,” Jorden said. But, “investors have been clear. They want us to be disciplined in both high and low commodity price environments and be proactive in returning cash to our shareholders.”

He added that “we need the American public to realize that we, as employees of U.S. E&P companies, are Americans first, and we will do everything we can to meet our patriotic duty. Cooperation between all parties, including the E&P industry, is essential for global energy security and the long-term health of our industry.”

Coterra holds more than 700,000 net acres in the Marcellus Shale and the Permian and Anadarko basins.

Executives said that inflation across the three areas was an additional impediment to production growth. They see inflation of 15-20% when comparing fiscal year 2022 to 2021.

“As with all of our peers, we are seeing significant inflation in the oil field,” Jorden said. “Pricing for drilling rigs, completion crews, fuel, sand, labor, oilfield services and trucking are all moving upward. Lead times for ordering tubulars, compressors, electrical equipment, production equipment and line pipe are, in many instances, 12 to 14 months from order to delivery. Premier drilling rigs and premier completion crews are in short supply.”

Executives talked about the opportunity for long-term commitments from liquefied natural gas (LNG) terminals on the Gulf Coast. Coterra currently moves 350 MMcf/d to the Cove Point LNG facility on a long-term deal.

“So we absolutely have the wherewithal to do these long-term commitments and experience with LNG,” Vice President of Operations Blake Sirgo said. “When we look at our assets, we’ve got three basins with multiple decades of high-quality inventory. So supply is not an issue for us.

“The challenge is just economics. It’s expensive to get to the coast. There’s limited pipes to get there. So you pay a pretty good fee just to get there. And once you get there, we’re entering a really crowded LNG market. And that’s really shown through in the deals that are being offered to the producers,” Sirgo said.

“So we’re wrangling all that right now, trying to understand it, but we’ve got to find a long-term deal that works for our shareholders and creates value, but also works for the buyer. And we haven’t found one yet, but we’re going to keep hammering away at it,” he said.