Infraestructura Energetica Nova (IEnova) is moving ahead with a project to convert its Energia Costa Azul liquefied natural gas (LNG) import terminal in Mexico to a liquefaction facility for exports to Pacific markets. 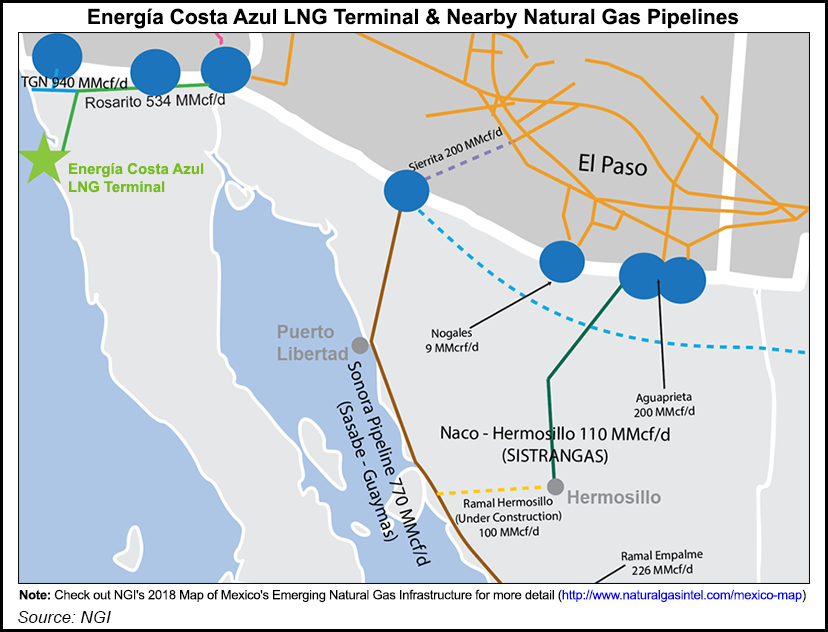 “We received the three major Mexican permits that are required and we are moving forward with discussions to better understand demand and size the project appropriately,” Vice President Tania Ortiz Mena, who handles business development, said during a fourth quarter earnings call on Wednesday. “We expect to make substantial progress on defining the project throughout this year.”

The Sempra Energy Mexico subsidiary signed an agreement in 2015 with Petroleos Mexicano (Pemex) to develop a liquefaction facility at Costa Azul, which is near Ensenada in the northwest state of Baja California.

Completed in 2008, Costa Azul was the first LNG import terminal to operate on the west coast of North America, and is one of three such facilities in Mexico.

The 1 Bcf/d facility was built to serve demand in Mexico and in California, but the unconventional natural gas boom in the United States and growing LNG demand in Asia have since curtailed shipments to the terminal. Costa Azul has not imported any gas since June 2016, according to the latest data from the Mexican Energy Ministry.

IEnova and Pemex are now looking to reconfigure Costa Azul to export LNG to markets in the Pacific Basin.

One pending issue is how the terminal would source gas for export. Mexico is a net gas importer and is expected to remain so over the coming years. Mexican energy officials have recently promoted the idea of transporting U.S. gas through the country’spipelines for export from Mexico’s Pacific Coast.

The Costa Azul terminal is isolated from Mexico’s main gas pipeline networks, which do not reach into the Baja California peninsula. The terminal feeds into the Rosarito pipeline, which links directly to two border-crossing points and indirectly to a third on the TGN system, all of which interconnect with pipelines in California.

IEnova management, when questioned by analysts during the conference call, would not disclose a timeline for the Costa Azul liquefaction project. “We are in the process of evaluating the project and making a final investment decision,” Ortiz Mena said.

For 2018, IEnova has a capital expenditure (capex) budget of $730 million, including $360 million for its natural gas business segment. The gas segment capex includes three liquids storage terminals under development in Mexico.

The projects, a marine terminal in the Port of Veracruz and two inland terminals in Puebla and Mexico City, primarily would store gasoline, diesel and jet fuel. Last August, IEnova signed long-term firm capacity contracts with Valero Energy Corp. for all three terminals, which are scheduled to go into service later this year and early 2019.

“This market is evolving very quickly because, once the gasoline prices were liberalized, various refiners and international traders are running to the market in order to secure a relevant position,” Ortiz Mena said. “The competition is varied. We’re seeing infrastructure funds, other midstream companies like us, and even some of the refiners and traders who are looking at developing infrastructure themselves.”

IEnova is one of the largest private developers of natural gas pipelines in Mexico, which is building out its transport network through a series of projects anchored by long-term agreements with the federal power company, the Comision Federal de Electricidad.

Management reported that a force majeure remains in place for the 510 MMcf/d Guaymas-El Oro, the downstream segment of IEnova’s Sonora pipeline. The force majeure was declared last August after a Yaqui indigenous community damaged a section of the project, which is one of several Mexican pipelines facing rights-of-way disputes and social protests.

“The pipeline is not in service at this time, and we continue working actively with all the authorities…to resolve this item,” CFO Nelly Molina said. “We declared force majeure under the contract and currently don’t have any economic impact.”

To the east along the Gulf Coast, IEnova is also building the 2.6 Bcf/d Sur de Texas-Tuxpan marine pipeline in a joint venture with TransCanada Corp. The $2.1 billion project is to extend from the maritime border in South Texas near Brownsville, and terminate at the Port of Tuxpan in Veracruz state.

The subsea pipeline is scheduled to come online by the end of this year. Asked if the project faced any legal issues related to conflicts with local communities, Ortiz Mena said “we continue to progress according to plan… and are working well and very closely with the communities where we have a presence.”

IEnova is also evaluating merger and acquisition (M&A) opportunities this year, according to management.

“We continue to pursue M&A as part of our growth strategy,” said Arturo Infanzon Favela, chief M&A and planning officer. “This will be an active year for M&A, as we are seeing several assets in the market, both in the power and the gas segments.”

Last year, IEnova finalized the acquisition of an additional 25% interest in the Los Ramones II Norte gas pipeline from Pemex, upping its indirect stake to 50%. The deal was valued at $547 million, including $258 million in cash and $289 million in outstanding debt.

In 2016, the company bought an additional 50% stake in subsidiary Gasoductos de Chihuahua and the Ventika wind farm. Gasoductos de Chihuahua transports natural gas and liquefied petroleum gas in Mexico, with assets that include the Samalayuca natural gas pipeline and Gloria a Dios compressor station in Chihuahua, and the Los Ramones I and San Fernando pipelines, both in northeast Mexico.

IEnova also has a natural gas distribution subsidiary, Ecogas, which serves clients in the states of Chihuahua, Coahuila, Durango and Baja California.

“The increase of $21million was mainly due to the acquisitions of Ventika in December 2016 and Los Ramones Norte in November 2017, higher operational results at the TermoelÃ©ctrica de Mexicali power plant, and the start of operations of new pipelines,” management said. “This increase was partially offset by operating, administrative and other expenses.”