California’s much-debated cap-and-trade carbon emissions program, now extended to 2030, could experience significant price spikes for the carbon credits over the next 12 years, according to a recent discussion paper by The Brattle Group. 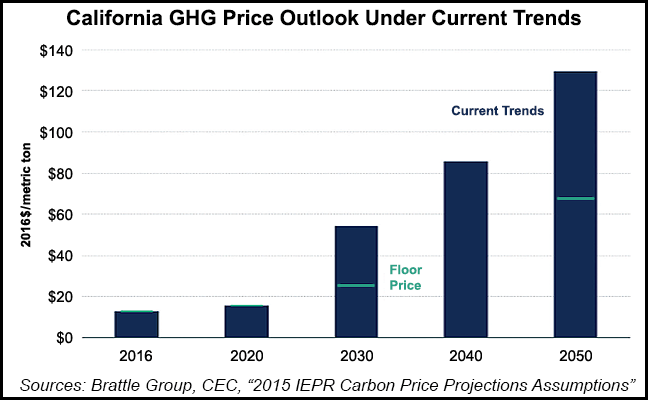 Near-term, the paper predicts prices in the program run by the California Air Resources Board (CARB) and participated in widely by operators in the oil/gas industry “will remain near the floor,” but long-term it “will need to rise substantially” unless technology breakthroughs massively decrease emissions outside of the power generation sector.

Brattle’s thesis is that California’s goal of 80% decarbonization by 2050 has got to raise the tab on carbon emissions credits. Also, assuming the cap-and-trade program is extended beyond 2030, it will have to deal with the market consequences of the aggressive goals. The analysis examined four different scenarios, including one with today’s low natural gas prices lasting for the next 30-plus years.

“To meet the California GHG reduction goals for 2030 (40% reduction) and 2050 (80%), GHG prices will have to rise dramatically to drive consumers away from higher-emitting fuels and incentivize the development and adoption of clean technologies, as well as suppress some demand for fossil fuels outside of the electric sector,” the analysts concluded.

GHG emissions in California declined 5% last year, the most significant one-year drop since 2013. The reductions came in the power generation sector as the result of more renewable sources coming online, the analysts said.

Cap-and-trade was extended through 2030 this year by the state legislature, and that action spurred GHG allowance prices to a record high of $15/ton in CARB’s most recent auction.

Brattle concluded that over the long term, “reaching California’s deep decarbonization goals may require large increases in GHG prices in the absence of technological breakthroughs.” Transportation and other non-electric generation sectors will have to play larger roles in the reduction of carbon emissions, the analysts said.

The analysts’ predict that fossil fuels will still represent 20% of the electric generation sector’s resources in 2050, and GHG emissions will remain above the 30 million tons level. “Notwithstanding quite high GHG prices, average wholesale energy prices do not increase nearly as much as they would with today’s generation mix as the electric sector is significantly decarbonized by 2050,” they said.

After staying at the floor of $15/ton through 2020, GHG prices will move upward under the current trends scenario, ranging from $35-$80/ton in the years leading up to 2030 and in the $95-$190/ton range between 2030 and 2050. “GHG prices are lower in [other] scenarios that assume rapid innovation of clean technologies that accelerates consumer adoption of lower-GHG alternatives,” the analysts said.

While predicting some significant carbon price hikes in the CARB emissions trading program, Brattle’s analyst concluded that California will not reach full decarbonization at mid-century. They think the full transformation off of fossil fuels will require storage technologies beyond those currently available and a broader market footprint by the California Independent System Operator.