The Port of Corpus Christi, a leading U.S. oil and natural gas export hub, has unveiled plans to explore green hydrogen production at its facilities in South Texas. 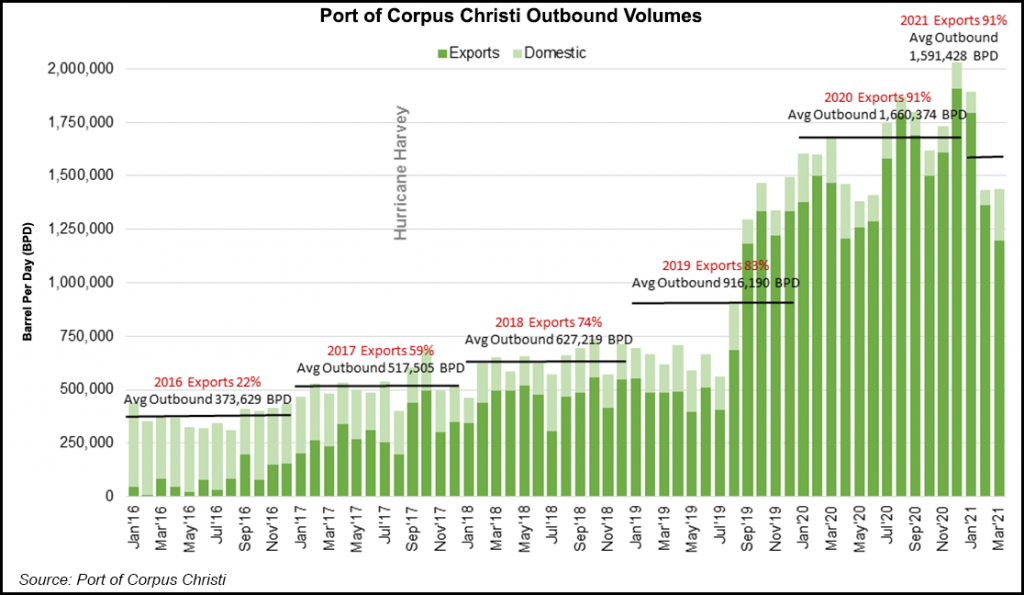 Under a memorandum of understanding (MOU) announced earlier this week, the Corpus Christi port is partnering with finance giant Ares Management Corp. to look into the potential for building the hydrogen facilities and a solar project that would power them.

The hydrogen produced would be used by port customers as a power source or, in the case of refiners, as a feedstock, the Port’s chief strategy officer Jeff Pollack told NGI.

“One of the elegant things about this partnership is that hydrogen as a product has immediate utility for our current customer base,” Pollack said. “It has very diverse and flexible applications, both as an energy carrier and as a direct input in refining processes of various types, whether that is of hydrocarbons, whether that’s of steel, and then its potential as an energy carrier is tremendous and diverse.”

The announcement comes as the energy transition is in full swing, with fossil fuel companies increasingly working to lower their emissions profiles amid pressure from global customers to reduce their carbon footprints.

The Corpus port is the largest export gateway for crude in the United States, logging 1.59 million b/d of outbound crude (91% for export) in the first three months of 2021. However, it too has made efforts to decarbonize, such as purchasing all of its electricity from renewable sources. It recently entered a preliminary agreement with Stabilis Solutions Inc. to incentivize developing liquefied natural gas as a marine fuel.

The MOU with Ares, which is nonbinding, envisages a “renewable energy and clean fuel hub,” according to the port. That would include a solar project capable of producing up to 210 MW, battery storage totaling up to 840 MWh and an electrolyzer facility capable of producing around 9,000 metric tons/year of green hydrogen. There is the possibility to expand in the future as well.

Beyond providing feedstock and power for the port’s customers, Pollack said the project has the potential for hydrogen exports as well.

A firm timeline has yet to be established for the project, as well as cost and the amounts Ares and the Corpus port expect to invest. Pollack said those would be determined following the completion of a regulatory analysis to determine the feasibility of the port’s preferred site for the project.

“Depending on the feedback we get on a regulatory standpoint, that will have some commercial implications, because that site either will or will not be viable,” Pollack said. “And so we’ll have to talk about other ways to realize that aspect of the commercial agreement. But we are moving forward in earnest.”