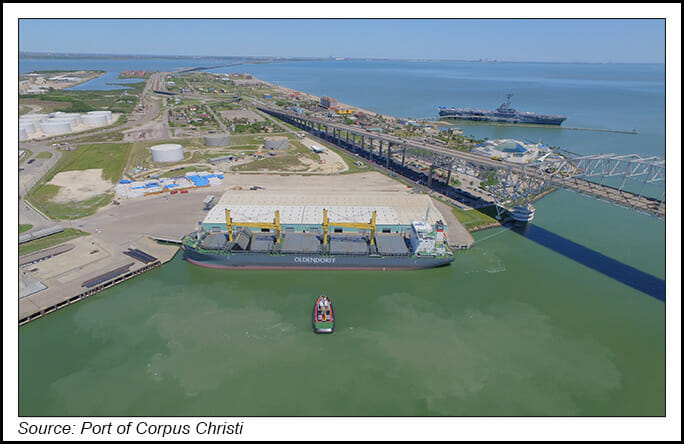 “These tonnage numbers are an indication of a continued recovery in the global energy markets, coupled with an economic resiliency resulting from our transportation infrastructure investments alongside our customers’ increased investments in their operations,” said Port CEO Sean Strawbridge.

LNG exports from the port reached 15.7 million tons last year as the global energy markets continued to recover from the demand destruction resulting from Covid-19, with further growth expected.

In addition, the port saw increases in break bulk cargo, such as wind energy components, natural gas liquids and refined products like diesel and motor gasoline.

The fourth quarter of 2021 was a particularly bright spot for the United States’ largest port, with 44.3 million tons of cargo besting the prior record from 2Q2021 and setting a new high for the second half of the year. From July through December, the port moved 86.8 million tons, up 4.7% from the previous mark set in the second half of 2020.

“While 2021 was no less challenging than 2020,” Strawbridge commended port commissioners and staff for their “continued dedication to creating more value for our customers as we increase the competitiveness of goods movement through our gateway.”

The port and the Coastal Bend region have seen more than $55 billion in private industrial investments over the past five years, “an unprecedented level of growth resulting in a vibrant regional economy,” according to port authorities.

Additional investments in infrastructure include the Corpus Christi Ship Channel Improvement Project, which once completed in late 2023 would render the Corpus Christi Ship Channel the deepest and widest ship channel in the U.S. Gulf of Mexico. Work on the second and third phases of the four-phase project are ongoing, with funding for the fourth and final phase pending federal appropriations.

Meanwhile, the port continues to diversify its customer and commodity portfolio. These include scalable hydrogen and renewable energy production, as well as a centralized carbon capture utilization and storage solution for its existing target sources and anticipated new industrial developments targeting South Texas.

Port Chairman Charles W. Zahn said the port “remains committed to helping its customers meet the demand for American-produced energy now and into the future, while also continuing the Port of Corpus Christi’s evolution as a renewable energy hub. We stand, as always, aligned with our industry partners as we move ahead with new projects in 2022 that will undoubtedly open the door to new investments and more jobs in Texas.”

The June Nymex natural gas futures contract rallied toward its expiration on Thursday, pushing above $9.401 in intraday trading and reaching the highest level since 2008. Even as traders digested a weak storage print and renewed concerns about a supply crunch, many took profits in the final hour of trading that ultimately sent futures into…