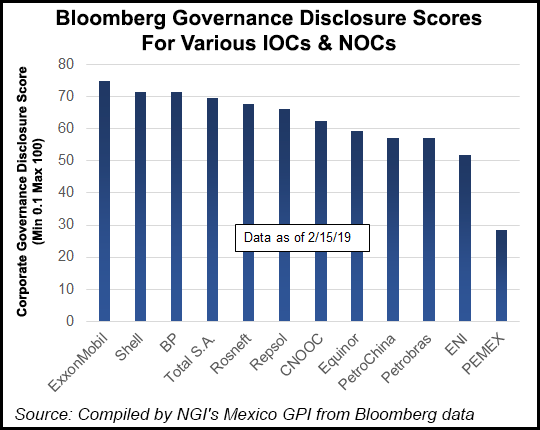 The findings are based on a corporate transparency index created by Mexico Evalua to diagnose the two productive state enterprises, or empresas productivas del estado (EPE), as they are known in Spanish. The index grades companies against the pillars for corporate governance established by Organization for Economic Cooperation and Development (OECD) guidelines, and on a series of sub-categories and variables based on global best practices.

“Neither Pemex nor CFE use transparency and reporting of information as a powerful tool for building trust among present and future commercial partners or investors,” the research found, “or for bolstering behavior within the companies for reducing and preventing corruption acts.”

The findings are compounded by a bill introduced in Mexico’s lower house in early January by LÃ³pez Obrador’s Morena coalition, Mexico Evalua said. “The initiative proposes to centralize power in the Pemex director [CEO], which would increase…political interference in the decision-making process and reduce the counterweights within the company.”

Mexico Evalua’s MarÃ­a Fernanda Ballesteros, coordinator of the economic regulation and competition program, said the proposed law “substantially modifies the objectives and conformation of Pemex’s governing body, concentrates decisions in [the hands of] a single person, and affects…transparency and accountability mechanisms. We are calling on legislators to open the discussion in a public and plural way.”

Fitch Ratings also cited Pemex’s weak corporate governance, as well as the proposed legislation, as driving factors in its decision to downgrade Pemex bonds by two notches in late January.

“Under the current Pemex law, the president of Mexico appoints the company’s CEO,” with all other positions approved by the board of directors’ independent human resources committee, Fitch credit analysts said at the time.

“The changes proposed to the law would allow management to appoint staff up to two levels below the CEO.”

LÃ³pez Obrador has criticized Mexico’s 2013 constitutional energy reform, which opened the formerly state-dominated energy sector to competition from the private sector, as usurping the country’s energy sovereignty and an attempt to weaken Pemex and CFE.

The administration’s 2019 federal budget included increases for Pemex and CFE, and cuts for the ComisiÃ³n Reguladora de EnergÃ­a and ComisiÃ³n Nacional de Hidrocarburos. The president has accused both independent energy regulatory agencies of working on behalf of the private sector to the detriment of Pemex and CFE.