Global natural gas demand is on track to drop by a record 5% in 2020 due to the economic impacts of Covid-19, the International Energy Agency (IEA) said Wednesday. 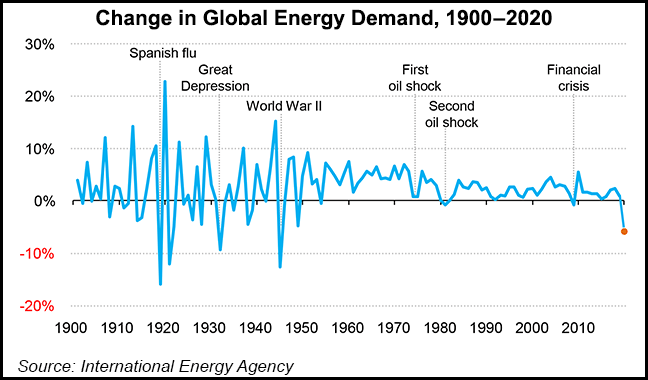 The year/year (y/y) decline, which follows 10 years of uninterrupted growth, would be the largest on record since natural gas demand developed at scale during the second half of the 20th century, the global energy watchdog said upon releasing the latest edition of its flagship Global Energy Review report.

Nonetheless, researchers expect the drop to be less pronounced than the decline in oil consumption, due to oil’s exposure to the collapse in transportation fuel demand.

The power generation and industrial sectors are expected to account for 60% and 25% of the total decrease in gas demand, respectively, while the energy sector itself — including upstream operations, refining and pipeline gas compression — is seen accounting for 10% of the drop.

Gas demand from the power generation, industrial and energy sectors is seen dropping by 7%, 5% and 4%, respectively.

In the residential and commercial sectors, meanwhile, most of the expected demand drop already occurred during the first quarter due to mild temperatures, researchers said, although the commercial sector did see some additional loss in heating-related gas demand during the lockdown periods.

The report’s authors noted that natural gas consumption already was falling in the first months of 2020 due to mild temperatures in the northern hemisphere, which partly helped create a glut of liquefied natural gas (LNG) and pushed global prices lower.

U.S. gas demand also fell by an estimated 4.5% y/y in the first quarter, driven by an 18% decline in residential and commercial demand.

While data suggests that global gas consumption fell by more than 3% y/y in the first quarter, natural gas supply “did not adjust to this drop in consumption, resulting in a considerable build-up of gas in storage,” researchers said, noting that U.S. dry gas production rose 7% y/y in the quarter and the global liquefied natural gas (LNG) trade swelled by an estimated 13%, with Europe accounting for about 60% of the increase in LNG imports.

U.S. underground gas storage inventories also rose by 77% y/y in the quarter and stood at 17% above the five-year average as of end-March.

IEA now forecasts that total energy demand will plunge by 6% in 2020, seven times the decline that resulted from the 2008 global financial crisis.

“In absolute terms, the decline is unprecedented — the equivalent of losing the entire energy demand of India, the world’s third largest energy consumer,” researchers said, adding, “Advanced economies are expected to see the biggest declines, with demand set to fall by 9% in the United States and by 11% in the European Union.”

Researchers found that each month of worldwide lockdown at the levels seen in early April can be expected to translate to a 1.5% dent in annual global energy demand.

Therefore, the pandemic’s impact on energy demand will depend largely on the stringency and duration of Covid-19 containment measures, IEA said.

Renewables are expected to be the only energy source that will grow in 2020 due to their priority access to grids and low operating costs, researchers said.

The combined share of gas and coal in the global power mix, meanwhile, is set to drop by three percentage points to a level not seen since 2001.

Carbon emissions are now forecast to drop by almost 8%, the largest y/y decline on record, reaching their lowest level since 2010. The drop in emissions is expected to be nearly six times larger than in 2009 after the financial crisis.

“Resulting from premature deaths and economic trauma around the world, the historic decline in global emissions is absolutely nothing to cheer,” Birol said. “And if the aftermath of the 2008 financial crisis is anything to go by, we are likely to soon see a sharp rebound in emissions as economic conditions improve.”