The coronavirus pandemic has wreaked havoc on life in general, and for the energy industry, the next few months may prove to be make or break, as capital spending plans are cut and employees move to home offices. 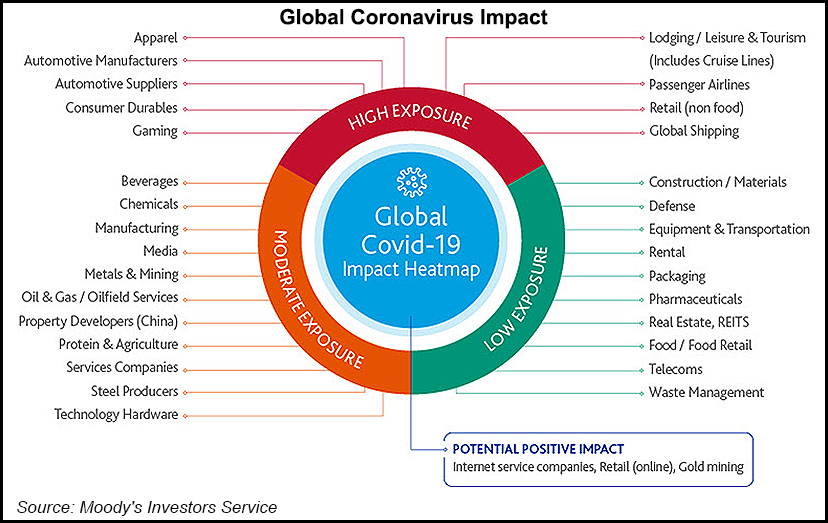 With industry bellwether ExxonMobil signaling it too is reconsidering its 2020 capital expenditure (capex) plans, it is joining a host of exploration and production (E&P) companies and their oilfield services (OFS) brethren in the most dismal and uncertain of times. The energy industry is in a funk as it deals with the untold negative impacts from Covid-19, while Russia and the Organization of the Petroleum Exporting Countries wage an oil price war that shows no sign of ending soon.

“Most E&P companies can and will survive even this ultra-depressed scenario,” said analysts with Raymond James & Associates Inc. “Some will not, the difference being largely a function of balance sheets.”

The Raymond James analysts on Monday forecast oil prices would average in the $20s during the second quarter. On Tuesday, Goldman Sachs analysts were in agreement.

Covid-19 is “driving second-order effects in both commodity and equity markets that are creating outcomes which far exceeded our negative views from last month,” Goldman Sachs analysts said. “The implications of lower oil prices are far reaching, driving down the input costs of agriculture and many other goods while quarantines will further hit restaurant and cafe demand for livestock and softs. Demand losses across the complex are now unprecedented.”
Goldman analysts already think global oil consumption has declined by 8 million b/d.

“The system strain creates a physical end even though the Covid-19 end is unknown, pushing our forecasts to shut-in economics. On balance, we now see commodities declining by 25% on a three-month basis, driven mainly by our downward revision in oil prices to $20/bbl for 2Q2020 to reflect the realization of breaching logistical storage.”

Financial markets are likely to rebound once the impact from Covid-19 stabilizes, but “commodity markets are spot assets and must clear the surpluses developing today from weak demand and rising supply.”

Before the coronavirus spread, analysts with Societe Generale had expected to see demand destruction of 4 million b/d of oil over March and April in their base case, with a “gradual normalization toward August and then a partial catch-up due to some purchases being deferred.”

However, the coronavirus “seems to have scaled up dramatically since our last forecast update,” which was published only a week ago (March 9). Societe Generale now expects to see “strong contractions in Asia and Europe” and an impact on the U.S. economy.

“We expect the peak of the oil demand destruction to occur in 2Q2020 with 5 million b/d of oil demand destroyed in those three months,” Societe Generale analysts said. Around 70% of demand destruction is seen in developed nations, “namely the Euro area, South Korea, Japan and the U.S.” In 3Q2020, oil consumption is expected to gradually normalize and then catch up in demand, and possibly “be even stronger.”

To that end, deep-pocketed ExxonMobil said it may “significantly reduce spending because of current market conditions caused by the pandemic and commodity price declines.” The Irving, TX-based supermajor had set annual capex through 2025 at $30-35 billion, with plans to invest up to $33 billion in 2020.

“Based on this unprecedented environment, we are evaluating all appropriate steps to significantly reduce capital and operating expenses in the near term,” said CEO Darren Woods. Plans would be outlined once they are finalized.

ExxonMobil has faced market downturns throughout its long history, and it has experience operating in a sustained low-price environment, the CEO noted. Like other companies, it is closely monitoring the pandemic and “has adjusted work arrangements” to ensure healthy work environments and to support communities where it operates.

“We are confident that we will manage through these challenging times by taking deliberate action to keep our people safe, our environment protected and our company strong,” said Woods.

Meanwhile, global E&P Hess Corp. has cut $800 million from its original $3 billion capex plans. The reductions primarily are to be achieved by dropping five of six rigs in the Bakken Shale by the end of May. Most discretionary exploration and offshore drilling activities, excluding Guyana, also are to be deferred.

Permian Basin operator Concho Resources Inc. is joining many of its peers, announcing it plans to reduce 2020 capex by 25% to $2 billion. And Dallas-based independent Kosmos Energy is reducing its capital budget by around 30% to under $250 million after identifying $100 million of discretionary capex that could be cut, mostly in the Gulf of Mexico portfolio.

For the OFS sector, whose fortunes are tied to E&P projects, the outlook is bleaker than bleak, Rystad Energy analysts said Tuesday.

Rystad is predicting 20% of Europe’s mid- and small-size OFS operators, mostly based in the UK or Norway, will become insolvent as the effect of the coronavirus hits the continent, with purchases down by around $5 billion from 2019.

The European OFS market was expected to remain basically flat this year from 2019 at $47 billion in Rystad’s pre-coronavirus estimates. However, cross-border travel limitations, lack of supply, quarantines and capex reductions are only some of the market’s challenges, the firm said.

“This will have a pronounced effect on the European energy service market, which is heavily dependent on its international workforce and an efficient flow of goods and services between nations,” said Rystad’s Audun Martinsen, head of OFS research.

“Bankruptcies will have to follow as a result, especially for mid- and small-sized suppliers, which in the UK and Norway add up to more than 1,000 companies,” said Martinsen. As many as 20%, effectively more than 200 companies, could become insolvent.

Oil and gas Income for developing countries could plunge this year by 50-85%, to the lowest levels in more than 20 years, based on IEA forecasts. The loss likely would have “major social and economic consequences, notably for public sector spending in vital areas such as healthcare and education,” Barkindo and Birol said.

Moody’s Investors Service credit analysts said the sectors hardest hit during the pandemic would be passenger airlines, shipping and lodging/leisure sectors as movement is restricted and supply chains disrupted. The “global spread will significantly slow economic growth, which will in turn amplify its financial impact on several key corporate sectors,” analysts said

“Companies’ ability to withstand the effects of the virus will depend on its duration, and we caution that as events unfold very rapidly on a daily basis, our assessment of exposure will change over time,” said Moody’s senior credit officer Richard Morawetz, who co-authored the latest outlook. Moody’s assessment is based on a baseline scenario that assumes a “normalization of economic activity in the second half of the year,” and the ability of some companies to withstand the effects depending on the duration of the virus.

The downside scenario factors in an increase in cases “and public fear that the virus will not be contained in the first half of 2020, leading to extensive and prolonged travel restrictions and quarantines, along with a prolonged slump in commodity prices.”