A larger-than-expected inventory draw failed to inject any bullishness into the natural gas futures market Thursday as traders and analysts continued to mull the potentially profound impacts of the coronavirus on the energy space and beyond. The April Nymex contract fell 2.2 cents to settle at $1.637/MMBtu. 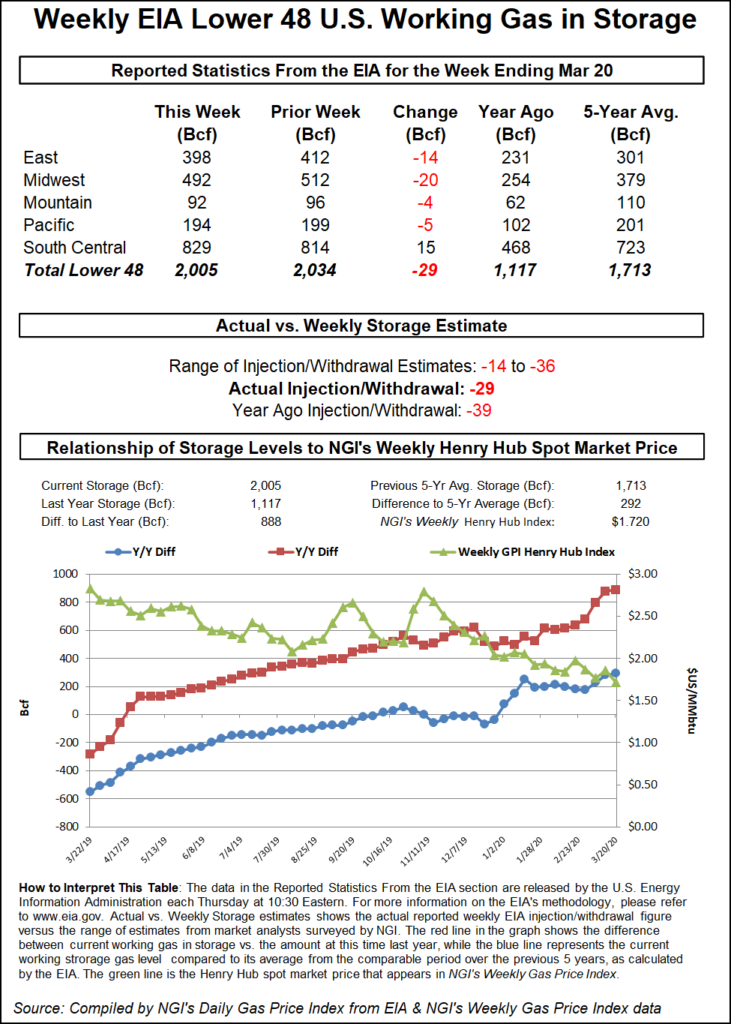 Like the rest of the economy, the natural gas market continues to wrestle with the ongoing coronavirus pandemic, a disruption without precedent that threatens demand destruction of potentially significant scope and duration.

In a special report published Thursday, analysts at EBW Analytics Group warned of demand declines of 5.5-6.1 Bcf/d for April and May, or 7.3-8.1% versus previously expected levels, under an “optimistic scenario” in which social distancing measures succeed in “sharply” limiting the spread of Covid-19 and the U.S. economy begins to rebound later in 2020.

“In total, the net loss of demand from April 2020 through March 2021 is likely to reach nearly 1,600 Bcf…but could be significantly larger,” the EBW analysts wrote. “The U.S. market has never previously experienced a demand shock of this nature…Given the steep decline in demand for natural gas that is likely to occur this spring and early this summer, even in the optimistic scenario” storage could fill to “record levels” during the injection season.

Of course, EBW’s “extended pandemic scenario” models an even greater impact on gas. Under that scenario, a “second wave of new infections” would begin in the fall, requiring renewed social distancing measures to stem the tide of infections.

“Our extended pandemic scenario estimates a deeper and longer-lasting contraction in the U.S. (and global) economy — increasing the potential near-term loss in natural gas and electricity demand and potential prolonged effects through winter 2020/21,” the EBW analysts said. This would result in “brutal” impacts to energy consumption, with the total demand loss from late this month through late 1Q2021, potentially reaching “as high as 2.5-3.0 Tcf — the largest demand loss ever in the U.S. market.”

Still, a warmer-than-normal spring in Europe could “provide a sliver of support” for the liquefied natural gas (LNG) market by increasing early season power demand on the continent, according to Genscape Inc.

Genscape pointed to AccuWeather’s 2020 Europe spring forecast, released earlier this month, which predicted that a “widespread lack of cold air” over the continent this winter will continue into the spring.

“This could be modestly supportive of power burns, which have already been migrating from coal to gas,” Genscape senior natural gas analyst Rick Margolin said. “Of course, the overall demand-destructive impacts to the European energy space from Covid-19 are believed to be substantial and likely a more powerful headwind than these conditions are stimulative.

“In addition, the continent’s gas storage facilities are still sitting on inventories well above normal levels.”

As for how coal has been faring on the continent, consumption for power generation has been in a “steep retreat” on a combination of mild weather and low gas prices incentivizing coal-to-gas switching, as well as the impacts of the pandemic, according to Margolin.

“So far this year-to-date, Genscape’s European power group is showing that Germany is consuming 61% less tonnage than the same stretch last year,” the analyst said. “Spain has consumed nothing this year-to-date, whereas at this same time last year it consumed an estimated 2.3 million tonnes.” Coal consumption in the United Kingdom “is down more than 1.3 million tonnes year/year, a 54% decline.”

The 29 Bcf pull, recorded for the week ending March 20, compares with a 39 Bcf withdrawal recorded in the year-ago period and a five-year average pull of 40 Bcf.

“This number is looser in terms of supply/demand balances, which is to be expected as we move forward in the slowdown of the economy,” Bespoke Weather Services said. “Numbers in the next few weeks will be quite useful in determining how much demand loss is actually taking place and, as a result, should carry more weight in terms of market impact, although duration is critical as well, which is a tougher assessment.”

Prior to the report estimates clustered around a withdrawal slightly lighter than the actual figure.

A Bloomberg survey showed a median prediction for a 30 Bcf withdrawal, while a Wall Street Journal poll showed an average estimate of minus 27 Bcf. A Reuters survey landed on a 25 Bcf withdrawal, matching the 25 Bcf pull predicted by NGI’s model. Estimates ranged from minus 14 Bcf to minus 36 Bcf.

By region, EIA recorded a 20 Bcf withdrawal in the Midwest during the week, with the East seeing a pull of 14 Bcf. The Pacific region withdrew 5 Bcf, while the Mountain region withdrew 4 Bcf, according to EIA. In the South Central, EIA recorded an 11 Bcf injection into salt stocks and a 3 Bcf build for nonsalt.

“Warm conditions will continue across most of the U.S. the next few days apart from portions of the cooler and showery West,” NatGasWeather said. “Highs will be very warm across the southern U.S., with 70s and 80s, with hot early season 90s for Texas and Oklahoma.” The Midwest and Northeast were expected to see “highs of upper 50s to 60s.

“Weak cool shots will impact the far northern U.S. next week with lows of 20s and 30s for a minor increase in national demand, while remaining very comfortable with highs of 50s to 80s most elsewhere.”

Most regions followed Henry lower, with some hubs in the Northeast and in the West posting larger discounts on the day. On the East Coast, Algonquin Citygate slid 17.0 cents to $1.380. On the other side of the country, SoCal Border Avg. tumbled 14.5 cents to $1.360.

Victimized by the oil price war, principally between Russia and Saudi Arabia, that collapsed the crude market earlier this month, the Permian Basin will see the largest output reduction among unconventional plays when measured in absolute terms, GlobalData oil and gas analyst Adrian Lara said in a research note Thursday.

Looking at the reduced capital spending plans among 36 key operators representing 75% of total Permian output, GlobalData estimated a drop of 834,000 boe/d for this group of producers in 2020 compared to expectations prior to the collapse.

“This is a significant reduction in shale supply, which confirms the level of reaction that this type of production has to steep price movements,” Lara said.