ExxonMobil on Tuesday joined its oil and gas peers around the world, announcing it is reducing capital spending by 30% and trimming cash operating expenses by 15% in response to the dual challenges of an oversupplied market and demand weakness from the Covid-19 pandemic. 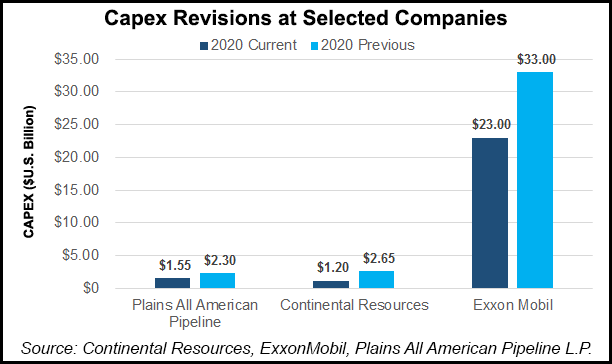 Capital expenditures (capex) for 2020 are now set at $23 billion, versus original guidance of $33 billion. The reduction in cash operating expenses is driven by “deliberate actions” to increase efficiencies and reduce costs, which include expected lower energy costs.

“After a thorough evaluation of the impacts of the pandemic and market conditions, we have worked closely with business partners to plan and execute capital adjustments that preserve long-term value, maximize cost efficiency, and put us in the strongest position when market conditions improve,” said CEO Darren Woods.

“The long-term fundamentals that underpin the company’s business plans have not changed — population and energy demand will grow, and the economy will rebound. Our capital allocation priorities also remain unchanged. Our objective is to continue investing in industry advantaged projects to create value, preserve cash for the dividend and make appropriate and prudent use of our balance sheet.”

ExxonMobil, which had signaled in March it would reduce spending, plans to exercise “additional reduction options if required. As market conditions evolve, the company will continue evaluating the impacts of decreased demand on its 2020 production levels as well as longer-term production impacts.”

Most of the capex cuts are in the massive Permian Basin operations, “where short-cycle investments can be more readily adjusted to respond to market conditions, while preserving value over the long term.”

Reduced activity in the Permian, where ExxonMobil is one of the largest operators, would affect the “pace of drilling and well completions until market conditions improve.” However, the capex reductions are not expected to “compromise the scale, functional excellence and cube development advantages that are maximizing resource recovery and value in the Permian.”

Another “integral” part of the long-term growth plan is to develop the numerous deepwater discoveries offshore Guyana. Operations onboard the Liza Destiny production vessel are unaffected, and startup of the second phase of field development remains on target for 2022, with the Liza Unity production vessel now under construction.

ExxonMobil is awaiting government approval to proceed with a third production vessel for the Payara development, but until then, some activities scheduled this year are now being deferred, “creating a potential delay in production startup of six to 12 months.”

A final investment decision (FID) for the Rovuma liquefied natural gas (LNG) project in Mozambique, which had been expected later this year, has been delayed. However, the Coral LNG development also in Mozambique “continues as planned.”

Meanwhile, global industry refinery output is forecast to decline in line with demand and available storage, but ExxonMobil said it plans to maintain its ability to return to normal operations as demand recovers.

“Timing of expansion plans for select downstream and chemical facilities across the company’s portfolio will be adjusted to capture efficiencies, slow spending pace and better align with a return in commodity demand.”

Even with the pullback, the Irving, TX-based supermajor still expects to meet its projected investment of $20 billion on Gulf Coast manufacturing facilities that are part of the Growing the Gulf initiative launched in 2017. Proposed U.S. investments of $50 billion over five years, announced in 2018, also is on track.

“While Covid-19 has had a significant impact on the global economy, we are confident that trade, transportation and manufacturing will recover,” said Woods. “ExxonMobil continues to invest in the projects that will position us to support economic recovery and capture value for our shareholders.”

Meanwhile, Midcontinent producer Continental Resources Inc., which already has announced a 55% reduction to capex, plans to reduce production in April and May by about 30%. The board also has suspended the quarterly dividend.

Midstreamer Plains All American Pipeline LP has reduced its 2020-2021 capital program by $750 million, or 33%. With its joint venture partners, the Houston operator also has cut $1.35 billion from spending allocations because the Red Oak project has been deferred; it would move Lower 48 oil to the Gulf Coast. In addition, share distributions have been cut by half.

Houston’s Solaris Oilfield Infrastructure Inc. said the average number of working fracture crews in its operating areas fell by about 10% in 1Q2020, and it expects activity to decline “by more than 50% sequentially” in 2Q2020. To that end, the workforce has been reduced across the company, with capex trimmed to $10 million from initial guidance of $20-40 million.