The Energy Information Administration (EIA) said Tuesday domestic oil and natural gas production are likely to fall this year as the coronavirus takes a chunk out of demand at home and abroad, but the federal agency maintained the same gas price it forecast in March. 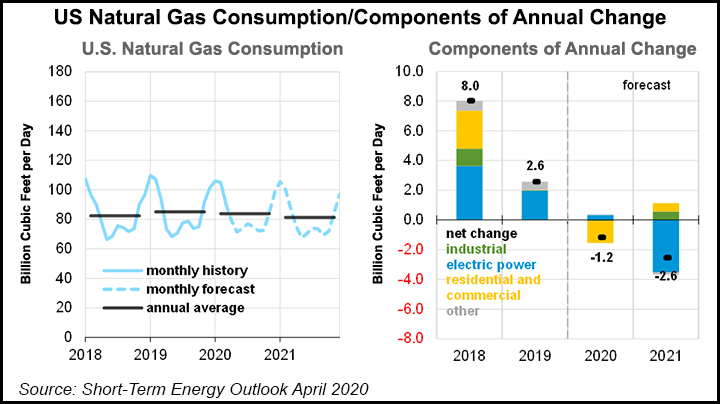 EIA warned of “heightened levels of uncertainty” in the latest edition of its Short-Term Energy Outlook (STEO). The world is awash in oil and gas, a factor that’s created significant volatility in prices, particularly for oil as a showdown between Russia and the Organization of the Petroleum Exporting Countries has suspended previously agreed upon production cuts.

In the near-term, EIA expects domestic industrial gas consumption to average 22.9 Bcf/d this year, or roughly the same as in 2019. But the industrial forecast is down from the previously expected 6.5% growth projected in the March STEO, as less manufacturing activity from measures aimed at curbing the spread of the coronavirus weakens consumption.

Volumes are set to fall most in the Appalachian and Permian basins, EIA said. In Appalachia, the agency noted that low gas prices are discouraging producers from engaging in drilling, while in the Permian, low crude prices should cut associated gas output from oil wells.

Gas prices are also depressed overseas, where key markets in Asia and Europe have seen demand decline on prolonged lockdowns imposed to mitigate the impacts of Covid-19. The global gas market is squeezing netbacks for U.S. liquefiers, with EIA forecasting a decline in U.S. exports in the third quarter. Liquefied natural gas exports are still poised to grow to an average of 7.8 Bcf/d this year, compared with 5.2 Bcf/d last year.

The oil market has been even more volatile in recent weeks. EIA said Brent crude prices averaged $32/bbl in March, or $24 less than the February average. The agency now expects Brent to average $33 in 2020, or $10 less than its previous forecast and almost one-half the $64 average of 2019.

EIA expects global petroleum and liquid fuels demand will decrease by 5.2 million b/d in 2020 from an average of 100.7 million b/d in 2019, but sees demand increasing by 6.4 million b/d in 2021. The lower global oil demand growth forecast in the latest STEO “reflects growing evidence of significant disruptions to global economic activity along with reduced expected travel globally because of Covid-19.”

The latest STEO also forecasts that the United States will again become a net importer of crude and petroleum products in 3Q2020 and remain a net importer in most months through the end of 2021. Fewer barrels would be available for export as U.S. crude oil production continues to decline, EIA said.