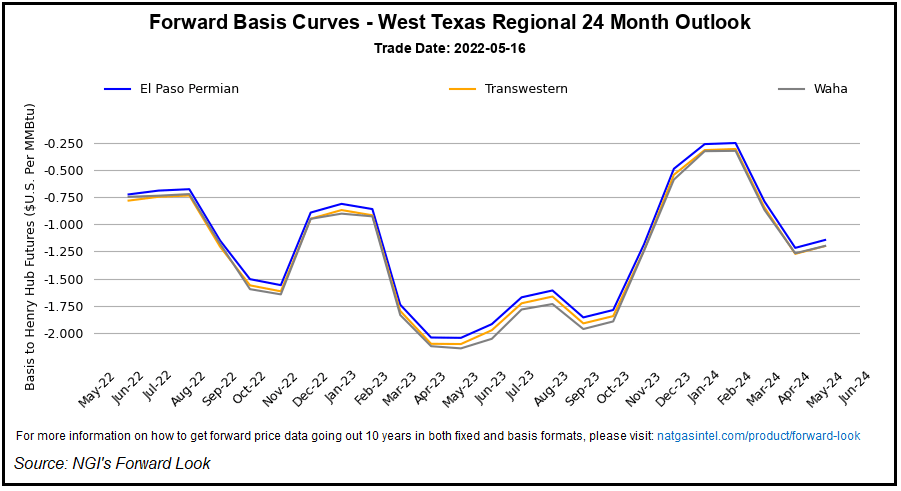 Spring maintenance continued to hamper production levels, with output estimated below 94 Bcf on Tuesday. That was down about 1 Bcf from Bloomberg’s estimate a day earlier and far below the 97 Bcf high of the past winter.

Wood Mackenzie analyst Laura Munder said the recent declines were concentrated in areas where maintenance work is underway. She noted drops in the Northeast (down about 500 MMcf/d), North Louisiana (down about 380 MMcf/d) and the Rockies (down about 275 MMcf/d).

At the same time, forecasts continue to show solid weather-driven demand in the coming weeks.

“We would rate the weather picture as bullish, due to the fact that models are growing more adamant about the return of stronger heat as we end the month and head into at least the start of June,” Bespoke Weather Services said.

A new trough into the West is “allowing hotter downstream ridging to develop in the eastern half of the nation again” Bespoke said. The “total demand over the next 15 days is still projected to run above normal levels.” Consumption “may grow even more bullish into early June.”

To date in May, Texas and the Southwest have been home to unseasonably strong cooling demand that is expected to carry through the summer.

The Electric Reliability Council of Texas, aka ERCOT, said this week it expects to have enough power to meet summer demand under normal circumstances. It noted a supply margin of nearly 23%. The grid operator, however, also said it expected electricity demand to hit a record level this summer, reflecting forecasts for persistent heat and the state’s swelling population.

If that develops, it would put steady pressure on natural gas demand and renewable fuels, ERCOT said. Depending on the availability of the latter, rolling blackouts may prove necessary on days with the most extreme cooling demand.

Countries throughout Europe are clamoring for U.S. exports of LNG to offset Russian gas supplies. The continent is trying to accelerate efforts to wean itself from Russian gas to protest the Kremlin’s invasion of Ukraine and to bolster long-term energy security.

Europe is looking to U.S. shipments of LNG to help fill the expected Russian void, feeding expectations for strong export demand through 2022 and beyond. LNG feed gas volumes hovered around 12 Bcf early this week, held back from record levels only by European market infrastructure’s limited ability to receive inflows of the super-chilled fuel and maintenance work at U.S. export facilities. That repair and upgrade work is expected to wind down over the next few weeks.

The cumulative result: Bullish sentiment ungirds the futures market heading toward summer and supply worries for next winter continue to simmer.

The U.S. Energy Information Administration (EIA) most recently reported an injection of 76 Bcf natural gas into storage for the week ended May 6. The increase lifted stocks to 1,643 Bcf, but left them 312 Bcf below five-year average levels, according to EIA.

A preliminary survey by Bloomberg, covering storage expectations for the week ended May 13, ranged from injections of 73 Bcf to 90 Bcf with a median 89 Bcf. That would compare with a five-year average injection of 87 Bcf for the period.

A print in the high 80s would still leave inventories at a steep deficit to historic norms.

“We are projecting a build of 88 bcf, which is already tighter than the market can be comfortable with,” Bespoke said. “Simply put, production needs to show up emphatically, and soon, in order to stop prices from moving much higher.”

Physical prices on Tuesday were led higher by robust gains in Texas.

NWS forecasts call for ongoing heat in the South – temperatures from the upper 80s to low 100s – through the trading week.

Next week, the eastern United States is expected to get in on the act with highs in the 80s and 90s. Boston, for one, could see a high of 90 as soon as this weekend, according to NWS forecasts.

While heat is the dominant weather story to date in May for natural gas markets, AccuWeather said parts of the West could prove a notable exception beginning Wednesday.

The firm’s forecasters said a “turbulent storm will swing in from the Pacific by midweek and deliver blustery rounds of rainfall.” This is expected to push through the northern Rockies and spread periods of rain and higher-elevation snowfall through the end of this week, they said.

“A pronounced dip in the jet stream and the storm will enter the Northwest on Wednesday then become progressively deeper into the northern and central Rockies Thursday into Friday,” AccuWeather senior meteorologist Matt Rinde said.

This could drive late-spring heating demand. In the Rockies on Tuesday, CIG gained 30.5 cents to $7.900.