“Don’t count your chickens before they hatch” was the lesson learned this week as natural gas forwards markets fizzled out after last week’s rally — falling an average 5 cents for September — as weather forecasts that had called for more hot weather to end August and start September cooled significantly. 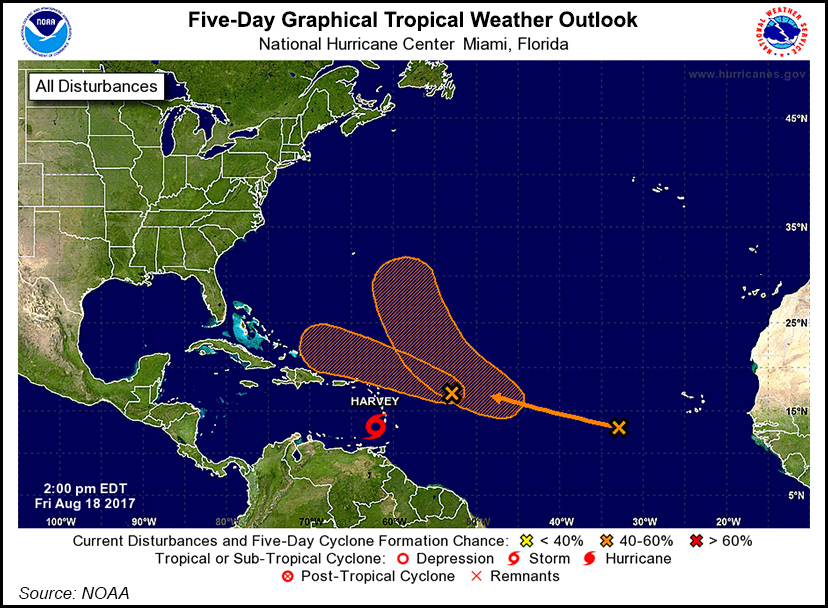 And now there is the potential for a trio of tropical disturbances to wreak a little havoc in the gas markets in the coming weeks. Tropical Storm Harvey developed Thursday afternoon east of the Windward Islands, becoming the eighth named tropical system of the 2017 Atlantic season, according to AccuWeather.

While Harvey could become a strong tropical storm or hurricane in the coming days, the most likely path of the system is westward across the Caribbean because of strong steering winds this weekend. Harvey may make landfall as a Category 1 hurricane in Central America on Monday night, AccuWeather said.

A second weather system, 92L, is expected to reach tropical storm strength over the weekend and could track toward the Gulf of Mexico or the U.S. mainland. A designation is assigned between 90 and 99, when there is potential for the formation of a tropical depression or storm within several days. The “L” represents potential formation for the Atlantic Ocean, AccuWeather said.

92L represents the greatest potential of all of the systems for approaching the U.S. or its coastal waters next week. Following a wave of unrelated thunderstorms expected over the weekend, an uptick in thunderstorms from 92L could reach the northwestern Bahamas and South Florida by Tuesday, the weather forecaster said.

In the meantime, high pressure is expected to expand over most of the country Sunday through Tuesday, with widespread high temperatures ranging from the upper 80s to 100s to drive considerably stronger-than-normal demand, forecaster NatGasWeather said. Even as far north as New York City, highs will reach near 90 degrees F.

A weather system that has trended cooler in recent days is then expected over the northeastern United States late next week, dropping demand back to near normal before another swing warmer occurs over the Aug. 26-27 weekend following a break between weather systems, the weather forecaster said.

“However, this is where we expect major weather model struggles to begin showing up as they try to account for tropical systems tracking into the Caribbean Sea or Gulf of Mexico, with some of the data suggesting they could arrive as rather strong hurricanes. This makes what happens the last several days of August tricky, with adjustment likely,” NatGasWeather said.

Regardless, there does not appear to be much for market bulls to hang their hats on in the near term, New York-based Bespoke Weather Services said. In fact, forecasters there expect the cool shot forecast for late next week to linger for at least a week, and the potential for it to last even longer is not unlikely.

The bearish weather picture had natural gas prices bleeding red on Friday morning, with the Nymex September futures contract trading nearly 3 cents lower in a tight range of less than 5 cents. September futures ultimately settled at $2.893, down 36 cents on the day.

“Though market tightness does limit downside, especially as we move through September and into the fall, in the coming few weeks, we see little for bulls in this market to truly get excited about,” as there seems to be gas-weighted degree days shed “almost daily,” and “there are still likely some demand decreases that have to be priced into this market,” Bespoke said.

Not even the possibility of entering the peak winter season with below-average storage levels seems to have the market concerned. The U.S. Energy Information Administration (EIA) on Thursday reportedan implied 53 Bcf build for the week ended Aug. 11, higher than most estimates and 3 Bcf above the five-year average build of 50 Bcf. The minute the weekly injection figure went live, the Nymex September contract traded as low as $2.856, about 3 cents down from Wednesday’s settle of $2.890.

But then traders digested EIA’s revisions, which included a bullish 9 Bcf downward revision to working gas stocks for the week ended Aug. 4. As a result, EIA reduced the 3,038 Bcf of total working gas stocks in last week’s report down to 3,029 Bcf.

“These revisions often cause initial uncertainty while the market attempts to decipher and digest the unnecessarily confusing explanation usually provided by the EIA…and this time was no exception,” analysts with Mobius Risk Group said.

“The 53 Bcf injection for the week ended Aug. 11 was somewhat more than the 48-50 Bcf consensus expectation and above the 50 Bcf five-year average for the date, and so incrementally bearish on that account,” Citi Futures’ Tim Evans said Thursday. “However, there was also a material…downward revision to prior data since June 30 as working gas was reclassified as base gas. In our view, the reclassification is a clear bullish surprise, with less working gas available to supply the market than the market had assumed.”

But Mobius analysts said despite the market’s reaction, the reality is that the revision doesn’t change the overall amount of gas in storage, nor the amount of gas injected weekly over the past month. “It was just a reclassification of gas already in storage. So we consider the revision more neutral than anything else,” the Houston-based team said.

The forecasters at NatGasWeather see the next two storage reports reflecting further declines in the storage overhang versus the five-year average before stalling out. In fact, a few days ago, the forecaster maintained its position that the market could see a flip to storage deficits in the last few days of August or the first few days of September.

Even with the possibility of heading into winter with storage inventories below historical levels, the market appears confident there will be ample production to meet winter demand.

“Despite uncertainty over near-term commodity prices, and a slight reduction in their planned 2017 capex spend, U.S. producers actually increased their overall 2017 production guidance a bit as a whole,” NGI’s Patrick Rau,director of strategy and commodity research said.

One example is Enterprise Products Partners LP, which expects higher rigs counts in the Permian Basin, as well as the Haynesville and Eagle Ford shales, inexorably lead to higher oil and natural gas volumes flowing through its systems, beginning in the second half of the year.

Meanwhile, Energy Transfer Partners LP’s (ETP) controversial Rover Pipeline should be in service in time to serve a big chunk of winter. “That right there would help alleviate the need to have as large a storage balance going into winter, everything else being equal,” Rau said.

ETP, through its affiliates, have asked FERC for authorization to place the related Panhandle and Trunkline backhaul projects into service. The backhaul projects are designed to add bi-directional capacity to Panhandle Eastern Pipe Line Co. LP’s and Trunkline Gas Co. LLC’s existing pipeline systems, allowing additional natural gas to flow out of the Appalachian Basin into Midwest and Gulf Coast markets.

The market has watched Rover’s progress closely because of its potential to uncork significant volumes of Marcellus and Utica shale production. News of the project’s setbacks have come amid rising Northeast production and widening basis differentials at Appalachian hubs like Dominion South.

ETP management said during arecent 2Q2017 conference call that construction on Phase 1a is nearly completed, with cleanup following a drilling fluids release near the Tuscarawas River in Stark County, OH, wrapping up around the same time.

FERC has made clean-up following the Tuscarawas spill acondition for receiving in-service authorization for Rover’s Phase 1a, including initial service along Mainline A from Cadiz, OH, to Defiance, OH.

Taking a closer look at the natural gas forward curves, there were few outliers this week as most market hubs across the United States mimicked the Nymex futures curve. The Nymex September futures contract, dropped about 5 cents from Aug. 11 to 17 to reach $2.929, while October futures lost around 4 cents to hit $2.966, while the rest of the curve slipped 2 cents or less.

Across the northern border, however, AECO prices in Alberta dropped considerably this week as maintenance issues, declining demand and cash market behavior rocked the market.

“Loads are falling off, and so imports for September are going to be down. Plus, maintenance is driving a lot of this, and cash prices are in the toilet,” a trader said.

TransCanada Corp. on Thursday (Aug. 17) began a five-day maintenance on its Foothills Saskatchewan system that puts more than 200 MMcf/d of flows from TC Nova to Northern Border at risk. Maintenance on Saskatchewan’s Foothills Zone 9 line would limit McNeill capacity to as low as 1,412 MMcf/d, which is 223 MMcf/d below the current 30-day average of 1,635 MMcf/d.

This work should constrain gas moving southeast out of Alberta, which could drive down AECO basis while elevating Ventura, data and analytics company Genscape Inc. said. NGI data, meanwhile, shows Ventura cash prices actually falling over the same time period, from $2.74 to $2.70.