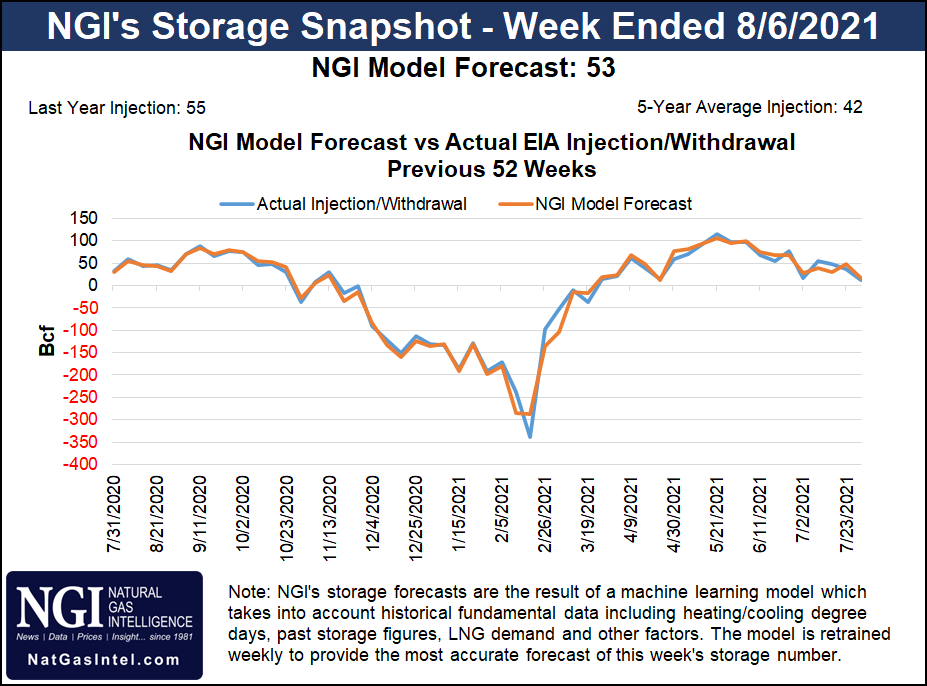 Spot gas prices were mixed as some of the heat expected across the United States is now expected to arrive a little later in the week. NGI’s Spot Gas National Avg. climbed 2.0 cents to $4.060.

As it was last week, the 15-day weather outlook was front and center during Monday’s gas trading session. The last several model runs showed the upcoming heat wave fading by the third week of August. The most recent forecasts cooled even further.

Bespoke Weather Services said while this week is still expected to be hot, the strongest demand would be in the back half of the period. In addition, the weather pattern for early next week shifted cooler.

“We do still see above-normal heat in the Midwest to East as we head into the final third of the month, however, so the forecast as a whole remains bullish versus even the five-year average, just slightly less so than we had previously,” Bespoke said.

As of now, August weather is projected to be near the five-year average, according to Bespoke. The forecaster also noted that tropical activity is trying to gain momentum, with some potential for development from a system currently approaching the Lesser Antilles. “As of right now, models do not show significant development,” so risks to Gulf of Mexico interests remain “low at this point in time.”

Over the next several months, though, that’s expected to change. Not only is winter demand expected to be robust as storage inventories lag overseas, but there are a couple of new LNG production units also slated to come online. This could elevate export demand to new heights.

EBW Analytics Group pointed out that during the past two to three weeks, the 2021-2022 natural gas contracts have repeatedly posted new highs. Even more strikingly, the remainder of the 2022 calendar strip and the 2023 contracts, although lightly traded, also have risen significantly.

These gains reflect a growing recognition that with European and Asian gas prices at their highest levels in years, new LNG liquefaction trains expected to come online soon, and U.S. natural gas producers showing impressive capital discipline, the forward curve is significantly underpriced, according to EBW.

“With U.S. storage well below historical norms and opportunities for coal displacement largely exhausted, this sentiment is not likely to fade quickly — providing support for the front-end of the curve even when summer ends, and laying the groundwork for significant further gains.”

Meanwhile, if the hot forecasts for late August prove accurate and the heat extends into September, balances could tighten even further. Energy Aspects said its previous 3.55 Tcf end-of-October storage estimate is now slipping closer to 3.5 Tcf. The 3.50-3.55 Tcf carryout has been “nearly unflappable over the course of the summer as we have previously raised prices to keep stocks near that thinly balanced end-of-season estimate.”

However, with both cash and futures near $4.00, prices are treading into the territory where much switching capacity would soon be exhausted, according to the consultancy. Energy Aspects noted that the scale of switching at $4.00 on a normal September or October day is far different than what is available in peak cooling season. Therefore, the gas share of thermal generation is likely to back off as national power load normalizes for the shoulder season.

Still, “there remains a risk that power generators and utilities with low inventory levels may conserve their coal stocks by offering their plants at higher dispatch costs, raising the price at which gas is still competitive,” Energy Aspects said. Some Southeast utilities may have as little as 10-days forward cover of coal inventories.

Spot gas prices were mixed to start the week, with heat continuing in the western United States and a new heat wave starting to move into the Midwest.

Prices farther north in the state and into the Rockies softened a bit from Friday’s levels even as a building heat wave is forecast to reach the Pacific Northwest by Tuesday.

The National Weather Service said “considerably” hotter weather forecast to overtake the region by midweek. At the same time, wildfire smoke continues to produce poor air quality for much of the western United States.

Wood Mackenzie said the Dixie fire in Northern California as of Sunday afternoon covered more than 724 square miles – larger than the city of Houston – and was only 21% contained, mostly along the southern and western borders. The uncontained areas of the fire have spread mostly to the north around Lake Almanor, rather than southwest toward Chico and more heavily populated areas.

PG&E Corp. has said that the Dixie Fire may have started when a tree fell on a power line, but the exact cause is still under investigation. The August Complex fire in the Coast Range of Northern California last year burned through more land than Dixie has so far, according to Wood Mackenzie. However, that fire was comprised of more than 30 smaller fires begun by lightning, rather than a utility line.

Meanwhile, the Climate Prediction Center’s latest drought outlook showed that dry conditions in the West are expected to persist through October. Already, the drought has led to the shutdown of one of the region’s hydroelectric generation plants.

The agency has been in regular communication with the California Independent Service Operator and the California Energy Commission, and steps have been taken in anticipation of the loss of power generation.

“DWR will continue to focus on reservoir operations and water storage management at Lake Oroville to preserve as much water in storage as possible,” the agency said. “DWR will use the River Valve Outlet System to release some water from the base of Oroville Dam to maintain river temperature requirements and outflows to the Feather River.”