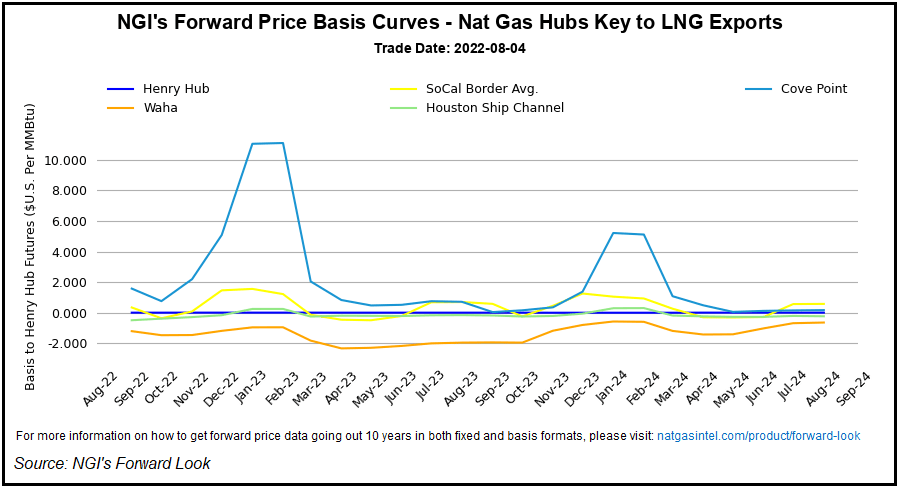 Spot gas prices declined across most of the country. The only gains were modest and sprinkled throughout the Lower 48. NGI’s Spot Gas National Avg. lost 12.0 cents to $8.045.

Though 90-degree highs were hanging on across the South Central and southeastern United States, the latest weather data showed cooler temperatures in store for the East Coast. It would be  a welcome respite from the stifling heat that’s produced records throughout the summer in a region where highs in the 70s and 80s are more common.

NatGasWeather said the Global Forecast System (GFS), which had been much hotter than the European model, shed a hefty 12-15 cooling degree days for the Aug. 12-19 period. The coming pattern is still bullish with widespread above-normal temperatures over the interior United States, “just not as impressively hot and ominous compared to recent weeks.”

The forecaster noted that production near 98 Bcf/d in recent days also is keeping the background state from being more bullish. “We also need to consider weather patterns aren’t going to be as hot as the second half of August progresses, meaning time will soon be running out for extreme summer heat.”

The cooler outlook would help to loosen balances that have fueled higher prices throughout the summer. With demand outstripping supply, there are concerns that light inventories and robust demand could lead to shortages this winter.

The latest government storage data offered the market a bit of optimism, though. The Energy Information Administration (EIA) said inventories for the week ending July 29 increased by 41 Bcf, which is above both year-earlier levels and the five-year average.

Tudor, Pickering, Holt & Co. analysts said the EIA’s 41 Bcf injection ultimately did little to move the price needle. Even though the September Nymex contract tumbled initially after the EIA report was published, bulls managed to claw back throughout the day.

“On a weather-adjusted basis, we estimate the market was around 1 Bcf/d oversupplied for the week versus 3 Bcf/d undersupplied the prior week,” TPH analysts said.

Like NatGasWeather, the TPH team said supply remained a focal point. Production of more than 98 Bcf/d was sustained through the week and hit an all-time high of 98.3 Bcf/d, according to its estimates. This outpaced the firm’s August expectations as output in the Haynesville Shale surprised to the upside and hit an all-time high of around 14.3 Bcf/d.

There is some disagreement between Permian Basin supply levels, according to TPH analysts. They said output appears to have surged higher in the past couple of weeks.

Looking ahead to the next EIA report, TPH’s preliminary modeling pointed toward a build of 42 Bcf, slightly tighter than the five-year average build of 45 Bcf.

Lower Cash Ahead Of Weekend

Spot gas prices were overwhelmingly lower on Friday, with the typical lull in demand over the three-day delivery period dragging down cash across the country. However, there are bursts of cool air forecast in the Pacific Northwest that should soften demand and produce some precipitation for the region as well.

The National Weather Service (NWS) said a cold front was to slowly advance through the Pacific Northwest and into the Northern Plains over the next few days. The advancing cold front was expected to trigger thunderstorms across the Northern Plains before reaching into the Upper Midwest. Some of these storms may become more organized over portions of the Upper Midwest, with heavy rainfall possibly setting up in proximity to a developing wave of surface low pressure.

Meanwhile, monsoonal showers would continue to rule farther south over the Great Basin and the Four Corners region, according to NWS. It said the rains may shift eastward across the central and southern Rockies over the weekend.

According to PG&E’s maintenance schedule, capacity through the Redwood Path would briefly resume near max capacity on Gas Day 17 before being cut again by another 330 MMcf/d from Gas Days Aug.18-30.

Over in the Northeast, a forecast for heavy showers over the weekend failed to stop small increases at several locations. Iroquois Zone 2 cash was up 4.0 cents to $8.290.