Energy exploration is off to a flying start in 2019, with the majors claiming massive conventional resource discoveries in the first quarter, according to Rystad Energy. 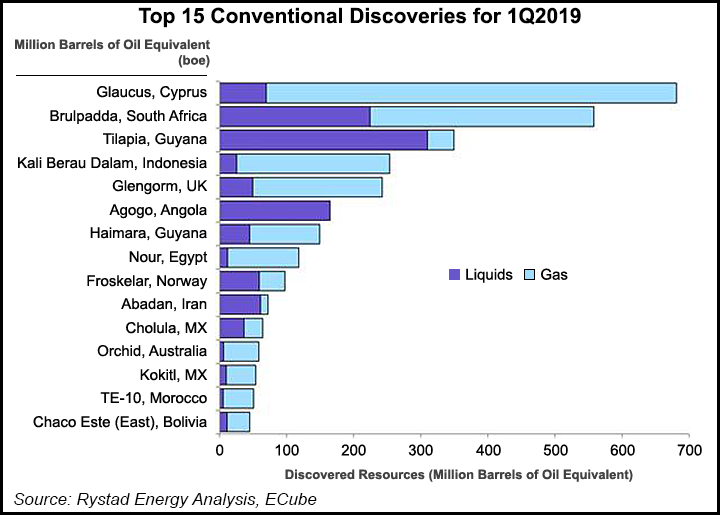 Conventional discoveries in the first three months reached an estimated 3.2 billion boe. Most of the estimated oil and gas reserves, overall at around 2.2 billion boe, were recorded in February, the best monthly tally on record since August 2015.

“If the rest of 2019 continues at a similar pace, this year will be on track to exceed last year’s discovered resources by 30%,” upstream analyst Taiyab Zain Shariff said.

Majors led the exploration charge, recording more than 2.4 billion boe of discovered resources. The six largest discoveries by the majors each exceed 150 million boe, and the top three could hold more than 300 million boe each.

ExxonMobil Corp. has been the most successful explorer to date this year, with three significant offshore discoveries accounting for 38% of the total global discovered volumes. In February the supermajor and partner Qatar Petroleum unveiled a natural gas resource of 5-8 Tcf offshore Cyprus.

Eni SpA and Total SA made a similar giant discovery in the neighboring block offshore Cyprus last year and have claimed successful offshore wells in South Africa, the United Kingdom, Angola and Egypt.

Repsol SA and its partners also in February claimed the largest natural gas discovery in Indonesia in 18 years and among the 10 largest finds worldwide in the past year.

The Spanish-based major, which operates and holds a 45% stake in the Kali Berau Dalam well, or KBD-2X, onshore in the Sakakemang block in South Sumatra, said the discovery may hold 2 Tcf-plus of recoverable reserves. The Kali Berau Dalam took the prize for the largest onshore discovery of the quarter, according to Rystad.

“From a global perspective, the push for substantial new discoveries shows no signs of slowing down, with another 35 high impact exploration wells expected to be drilled this year, both onshore and offshore,” analysts said.

“If these wells prove successful, 2019’s interim discovered resources will be the largest since the downturn in 2014,” Shariff said.

The exploration sector last year added at least 10.5 billion boe in conventional newfield volumes, with a split of 40:60 oil-to-gas, according to Wood Mackenzie.

Overall volumes were considered modest but some well results were encouraging, including from three discoveries in Guyana (Ranger and Hammerhead) and offshore Australia (Roebuck sub-basin).

Discoveries this year are expected to add around 15-20 billion boe of new resource, the energy consultancy said.