A Bureau of Land Management (BLM) decision to allow year-round oil and natural gas drilling within 1.5 million acres of federal and Wyoming state land has ended a six-year stalemate among a consortium of producers and regulators. 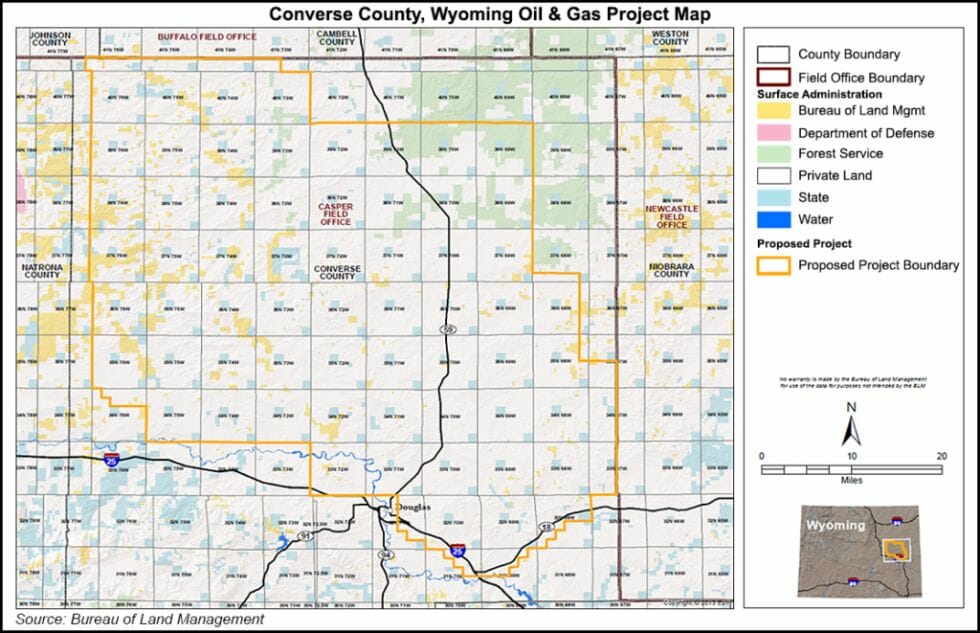 The BLM decision allows the exploration and production (E&P) companies to drill on 1,500 multi-well pads within the proposed Converse County Oil and Gas Project area of the Powder River Basin (PRB) for 10 years.

The E&Ps are allowed to use all types of drilling techniques — directional, vertical and horizontal —  according to the Record of Decision (ROD). Also allowed is infrastructure within the PRB including well pads, roads, pipelines, power lines, compressor and electrical substations, as well as ancillary facilities such as water supply wells and water disposal facilities.

The Converse County project proposed by Chesapeake Energy Corp., Devon Energy Corp., EOG Resources Inc., Northwoods Energy LLC and Occidental Petroleum Corp. would be primarily on private lands, with 7% of the land administered by the state, 6% by the BLM and 4% by the U.S. Forest Service.

The BLM used the National Environmental Policy Act (NEPA) that was in place in July at the time the final environmental impact statement (FEIS) was prepared and posted for review. The Council of Environmental Quality around the same time updated the regulations for federal agencies to implement NEPA, the first time it had done so since 1978. The changes went into effect in September, but for NEPA reviews begun before then, agencies could choose whether to apply the revised regulations or proceed under the 1978 regulations.

Interior Secretary David Bernhardt determined that the analysis contained within the FEIS was “adequate” for completing the ROD, but said the decision applies only to the federal lands within the project area. The decision modified the 2007 Casper Field Office Resource Management Plan to allow for year-round drilling while continuing to protect some raptor habitat.

Wyoming Gov. Mark Gordon said the decision “sets the framework for hundreds of jobs” in the state “and ensures proper safeguards” for protecting wildlife in the project area.

The project is expected to generate roughly 8,000 jobs and around $18-28 billion in federal revenue, according to BLM. While the ROD approves the preferred alternative analyzed in the FEIS, it “does not authorize any on-the-ground activity. On-the-ground construction and development will require separate site-specific review and approval before it can begin,” Bernhardt said.

A draft EIS for the project was first issued by BLM in January 2018, but after evaluating public comments, regulators determined that a supplemental report was necessary to potential impacts to some  raptor nests within two federal planning areas.

“More than six years after we started this process, we have arrived at an encouraging outcome that will benefit the people of our Country, State and Converse County,” said Converse County Commissioner Robert Short.

How soon the five E&Ps may begin development of the PRB acreage could depend on how quickly and to what extent oil prices recover amid the Covid-19 pandemic. U.S. oil prices sank into negative territory last May, but recovered to the $40/bbl range rather quickly. However, prices have struggled to gain further momentum as the virus has impacted demand around the world.

A Raymond James & Associates Inc. analyst team led by John Freeman and Pavel Polchanov said they expect West Texas Intermediate crude prices to close 2021 at $65, “which implies an average of $57 for the year (20% above the futures strip), followed by an average of $65 in 2022 (40% above the strip), with Brent at a modest premium.”

Meanwhile, drilling activity in the United States and other parts of the world has been dramatically reduced over the past year.

In related news, Saudi Arabia, which leads the Organization of the Petroleum Exporting Countries (OPEC), at the conclusion of the cartel’s meeting, agreed Tuesday to unilaterally cut 1 million b/d of its oil production quota in February and March. However, Russia and Kazakhstan were allowed to increase production by 10,000 in those two months, according to the preliminary agreement. OPEC and its allies, which include Russia, in December agreed to increase production by 500,000 b/d, but it said at the time monthly assessments would be used to determine whether to alter output.

News of the OPEC deal sent WTI prices sharply higher. The prompt-month contract surged to a $50.20/bbl intraday high on Tuesday, the first time it has done so since last February, before settling at $49.93. The U.S. rig count, meanwhile, climbed three units week/week to 351 for the period ending Wednesday (Dec. 30), but was off from 796 rigs at the same time last year.