With the clock ticking, it remained unclear Tuesday whether Sen. Joe Manchin (D-WV) would secure the votes needed to pass a controversial permitting reform bill supported by the natural gas industry. 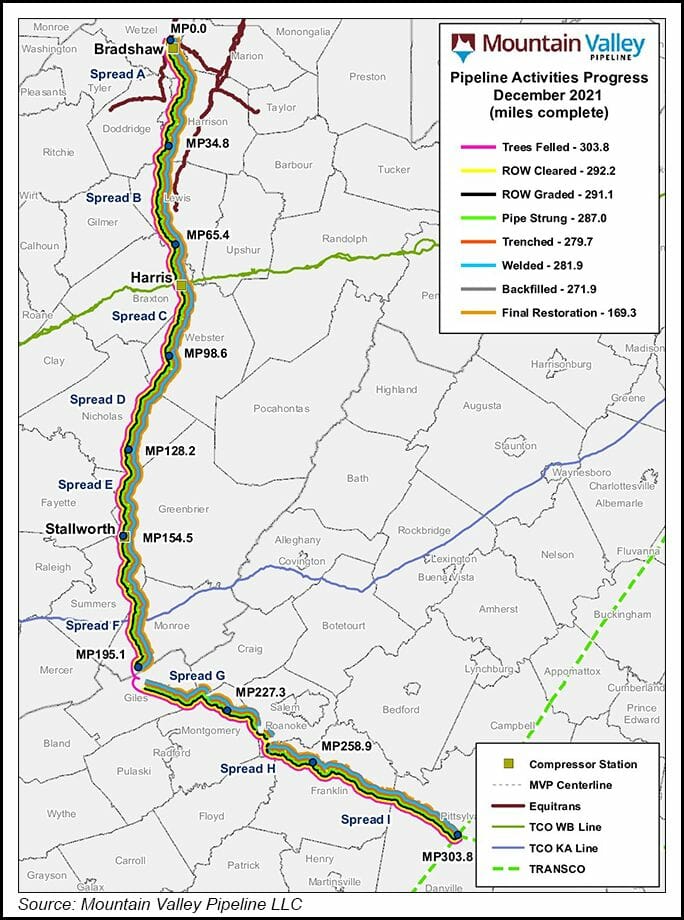 The Senate Appropriations Committee released the text Monday evening of a continuing resolution (CR) to fund the federal government that must be passed by Sept. 30 to avoid a potential government shutdown.

The EISA would streamline the review process for energy infrastructure, and guarantee approval and completion of the 94% finished Mountain Valley Pipeline LLC (MVP) project.

The version of the EISA published Monday was mostly identical to the language released by Manchin last week, though it excluded a provision that would have broadened the scope of state and Tribal environmental reviews under Section 401 of the Clean Water Act (CWA).

“We regard the CWA change as an overt bid to curry support from fence-sitting Republicans that Manchin would need to win a filibuster-quashing 60 supermajority for the CR as drafted,” said ClearView Energy Partners LLC analysts on Tuesday.

Nonetheless, continued opposition to the bill by top Republicans including Senate Minority Leader Mitch McConnell (R-KY) “could suggest that significant continuing headwinds to passage of a CR with the permitting provisions remain,” according to ClearView analysts.

The Senate was scheduled to vote late Tuesday afternoon on a motion to proceed to a vote on the CR.

Multiple Senate Republicans and some progressive Democrats have signaled they would not vote for the funding bill if the permitting reforms are included. The CR requires 60 votes to prevent a filibuster.

What’s In The Permitting Bill?

Manchin’s reform package includes several provisions designed to speed up permitting and prevent projects from being bogged down by endless litigation.

Manchin’s fellow West Virginian, GOP Sen. Shelley Moore Capito, has said she would support Manchin’s proposal, citing the MVP component as a key factor in her decision. The MVP project would transport up to 2 Bcf/d of natural gas out of the Appalachian Basin.

“The prospects for retention of the provisions supporting [MVP] remain contentious,” said the ClearView team. “While inclusion of these provisions would be incrementally positive for MVP, we would not rule out the project receiving its outstanding permits in time to meet the current 2H2023 in service target if this language ultimately isn’t included in the CR.”

Other key components of Manchin’s bill include setting a two-year target for National Environmental Policy Act (NEPA) reviews for major energy projects and a 150-day statute of limitations for court challenges to energy projects.

The bill would also give FERC jurisdiction to regulate interstate hydrogen pipelines under the Natural Gas Act.

In addition, it would require the president to define a list of strategically important fossil and renewable energy projects, as well as mineral projects.

Another contentious provision would give the Federal Energy Regulatory Commission increased permitting authority for electricity transmission lines, a measure considered essential for mass adoption of renewable energy sources such as wind and solar.

The U.S. Chamber of Commerce’s Neil Bradley, chief policy officer, urged legislators to pass the permitting reforms, but said, “we have concerns with provisions related to transmission siting and encourage lawmakers to revise this section.”

The Wall Street Journal editorial board also called the transmission provisions a “poison pill” that would let the federal government “socialize the cost of renewable energy on states.”

The natural gas industry has long advocated for an overhaul of the current permitting process, including the Interstate Natural Gas Association of America (INGAA) and American Gas Association (AGA).

“We appreciate that the intent of the Energy Independence and Security Act of 2022 is to improve the permitting process for all forms of energy infrastructure and that it helps advance the Mountain Valley Pipeline, which is critically needed energy infrastructure delayed by a broken permitting process,” said INGAA CEO Amy Andryszak. “When built, MVP will deliver much needed natural gas supplies to enhance energy security, reliability, and keep energy bills affordable.”

She added, “After reviewing the most recent version of the legislation, we believe there are helpful provisions in this bill, including a much-needed process for coordinating multi-agency review and decisions on proposed projects as well as estimated timeframes by which agencies are expected to complete reviews. Still, more needs to be done to improve overall permitting reform.”

“It is significant to see Republicans and Democrats acknowledge that permitting is a serious impediment to building badly needed infrastructure in our country,” Harbert said. “America’s natural gas industry stands ready to invest in more American energy and infrastructure, but our impenetrable permitting process stands in our way.”

She continued, “Senators Manchin and Capito deserve credit for keeping the spotlight on permitting reform. This is not a partisan problem – it is an American problem – and we are eager to work with anyone that is interested in solutions.”

The United Mine Workers of America, the American Chemistry Council and the American Clean Power Association all have endorsed Manchin’s bill as well.

Manchin, who chairs the Senate Energy and Natural Resources Committee, voted in support of President Biden’s landmark Inflation Reduction Act (IRA) on the condition that Democratic leaders would advance the permitting reforms.

“No matter what you want to build, whether it’s transmission pipelines or hydropower dams, more often than not, it takes too long and drives up costs,” Manchin said in remarks to fellow senators. “You can double your cost within a five- to six-, seven-year period from what the original cost may have been.”

The American people, he said, are facing a “200% increase in natural gas,” while gasoline is up 67% and residential electricity is up 15%.

“I can assure you, the longer the time goes on, the more the price goes up,” he said. “That’s what we’re facing in America today with energy.”

Independent Sen. Bernie Sanders of Vermont, who caucuses with Democrats, said he would not vote in favor of permit reform. While most Republicans favor changes to the federal permitting system, the looming midterm elections in November could scuttle bipartisan dealmaking.

“I guess the old saying goes that politics makes strange bedfellows,” Manchin said in his remarks. “I’ve been around for a long time in state politics and federal politics. I’ve never seen stranger bedfellows than Bernie Sanders and the extreme liberals siding with Republican leadership. In the Democratic caucus, I’ve never seen this happen.

“So, what I’m hearing is that this is revenge politics toward one person, me. And I’m thinking, this is not about me.”

Manchin also chastised Republicans following their plans to torpedo his permitting reform. GOP Sen. John Cornyn of Texas made stinging remarks indicating that Manchin would get no help from the other side of the aisle.

“Generally speaking, Republicans are for permitting reform,” Cornyn said. However, Manchin’s decision to vote in favor of President Biden’s IRA “has engendered a lot of bad blood.” Said the Texas senator, “there’s not a lot of sympathy on our side to provide Sen. Manchin a reward.”

In response, Manchin said it was irresponsible to not work for the good of the country. The CR “doesn’t pass without the Republicans,” he said.

“To say, ‘We did this and we voted against it because of Joe Manchin’ makes no sense whatsoever. None whatsoever. So, we’re in this quandary right now. They’re going to vote and it’s going to be in the CR.

“And if they’re willing to say they’re going to shut down the government because of a personal attack on me, or by not looking at the good of the country, that is what makes people sick about politics. It makes me sick about politics,” Manchin said.

“You know me, if it looks good, I don’t care whether it was a Republican or Democratic idea. I’m for it. As long as I can go home and explain it, it makes sense.”