Continental Resources Inc. is expanding into the Permian Basin through an all-cash acquisition from Pioneer Natural Resources Co. valued at about $3.25 billion. 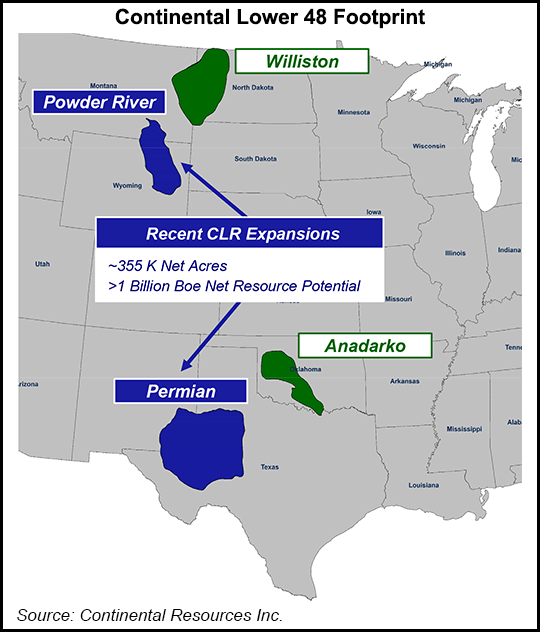 The assets in the Texas portion of the Delaware sub-basin are currently producing 55,000 boe/d with a 70% oil cut. They comprise more than 1,000 total locations, including more than 650 gross operated locations in the Third Bone Spring/Wolfcamp A and B formations

The assets span 50,000 net royalty acres and 31,000 net surface acres, and have extensive water infrastructure in place, according to Continental.

“Continental’s foundation has always been built upon a strong geology-led corporate strategy,” CEO Bill Berry said Wednesday upon announcing the transaction. “This continues today and has directly led us to our new strategic position in the Permian Basin. This acquisition will complement our existing deep inventory portfolio in the Bakken, Oklahoma and most recently, the Powder River Basin.”

Continental currently operates primarily in the Bakken Shale, Powder River Basin (PRB), and in Oklahoma’s South Central Oklahoma Oil Province, or SCOOP, and the Sooner Trend of the Anadarko Basin, mostly in Canadian and Kingfisher Counties, or STACK.

Earlier this year Continental acquired 130,000 net acres and 9,000 boe/d of oil-weighted production in the PRB from Samson Resources II LLC. The Permian and PRB assets add up to a combined 355,000 net acres with more than 1 billion boe of net resource potential.

The proved, developed and producing reserves in the Delaware represent an estimated 75% of the transaction price, management said. “In addition to the competitive geologic attributes, this transaction is accretive on key financial metrics” and will help Continental meet its long-term net debt goals, Berry added.

The transaction is expected to close in December.

Pioneer, for its part, said the divestiture would  allow it to be “100% focused” on developing its “high-margin, high-return” assets in the Permian’s Midland sub-basin, “where we have decades of operating experience and the size and scale to generate significant free cash flow. This divestment strengthens our balance sheet and enables Pioneer to add opportunistic share repurchases during market dislocations to our capital return strategy.”

Initial analyst reactions to the deal were mixed.

Enverus director Andrew Dittmar said Continental’s expansions into the PRB and Permian “likely speak to a need for public companies to build a strong runway of untapped drilling inventory to sustain the cash flow generation achieved this year.”

The challenge for Continental, however, “will be navigating successful development of its acquired position as a new entrant to the basin,” Dittmar said. “Most recent Permian deals have gone to companies with existing Permian assets looking to expand their operations.

“The Pioneer asset may also be more technically challenging for development given its location in the southern part of the play and the need to work around a significant number of existing wells.”

Still, even fringe Permian assets “can still stack up well relative to other regions,” Dittmar said.

Siebert Williams Shank & Co. LLC’s Gabriele Sorbara, managing director for Equity Research, also commented on the deal. “On our initial take, the transaction dilutes free cash flow yield” for Continental “and the optics are negative with the deal presenting a headwind near term with regards to shareholder cash returns with many unanswered questions in the earnings materials.”

In Oklahoma, it has made a “deliberate pivot to capture gas commodity strength” this year. All of its rigs in the state are to be devoted to natural gas in 4Q2021 versus 50% in 2Q2020.

In the Bakken, Continental brought 25 gross operated wells online in 3Q2021 and is on track to deliver a 7% year/year reduction in well costs in 2021, management said.

Continental during the third quarter reported a record $669 million of free cash flow (FCF) and is projecting full-year 2021 FCF of $2.6 billion at current strip prices.