Continental Resources Inc. (CLR) had prospectors beating a path to Oklahoma following strong well results two years ago in the South Central Oklahoma Oil Province, which it dubbed the SCOOP. Initial well results from a stealth discovery that it disclosed Thursday in the heart of the SCOOP, the Springer Shale, may draw even more. 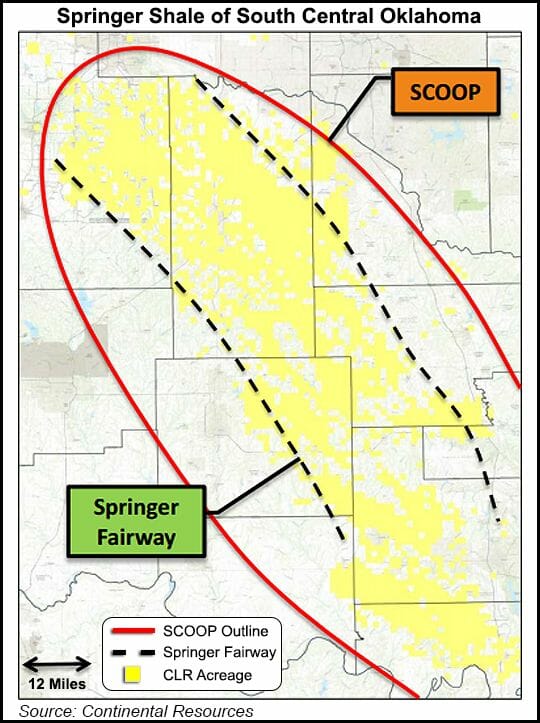 Company executives talked about CLR’s plans during a half-day investor conference in Oklahoma City. While most of the discussions were centered around results in the Bakken Shale, where CLR is the top operator, enthusiasm was high for the prospective Springer Shale, which has been kept under wraps for 20 months.

The company had hinted about the stealth play when the SCOOP results were disclosed in 2012 (see Shale Daily, Oct. 11, 2012). Time was needed to secure leases and do some tests, said senior exploration geologist Will Parker. There’s been enough data done, and the company really, really likes what it sees, he said. The “stealth play has become reality…”

“Every Woodford well that’s drilled out there gets a free look at the Springer every time,” said Resource Development Manager Dan Harms. “We have an extremely high confidence in the distribution of this zone. We’ve never had a reservoir so well defined.”

The first well was drilled 20 months ago and the company “kept that under our belts…it was a whole, totally new horizon that complemented SCOOP but had nothing to do with Woodford,” said Harms. The first 11 wells averaged 940,000 boe/d for 30 days and were 67% oil. They “confirmed the repeatability.”

CLR now has eight wells on production that have had initial production rates as high as 2,133 boe/d. Another three were to be on flowback this week and two were to be completed in the next few days.

CLR now has begun to drill the first 128-acre density tests in the shale play. Three tests are planned in the Hartley unit in Grady County, OK.

One thing the company likes about the Springer wells is the low cost to drill — at the current cost of oil, Harms said. Completed wells cost on average $9.7 million. With oil priced at $90.00/bbl, “at the current drilling cost, that’s greater than 100% rate of return,” he said.

CLR plans to direct eight rigs in the shale play in 2015. “If we can keep eight in this play, we have 11 to 12 years of drilling in just the oil window,” Harms said.

The Springer Shale’s gas/condensate fairway hasn’t been delineated yet, but the unrisked resource potential has about 200 net locations, according to Harms. “We’re still delineating where the dry gas is and where the condensate is,” he said. “They provide future opportunities and optionality on higher gas prices. We’re limiting capital allocation and focusing on higher returns in the oil fairway.”

The Springer’s economics “are extremely attractive at $9.7 million well costs,” providing CLR more than a 100% rate of return, TPH said.