Midcontinent oil operator Continental Resources Inc. has worked out a joint development agreement (JDA) with a subsidiary of South Korea’s SK Group — its first in the United States — to drill for natural gas in the legacy Cana-Woodford Shale holdings in Western Oklahoma. 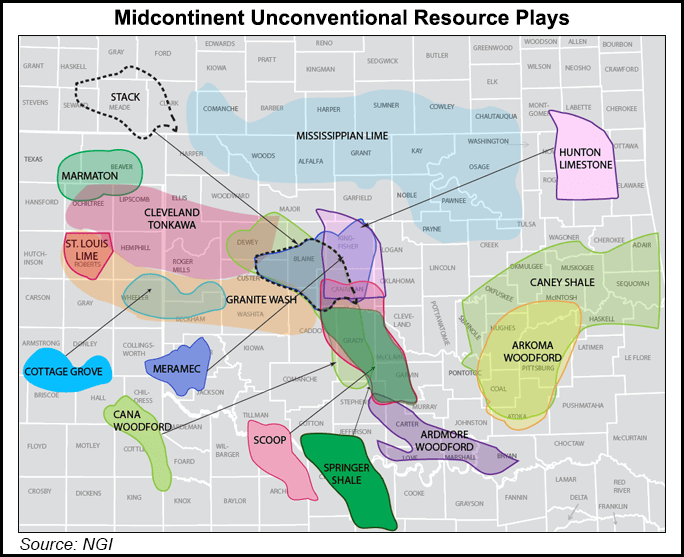 The Oklahoma City-based independent agreed to sell SK E&S almost half (49.9%) of its interests in 44,000 net acres for $360 million. The leasehold is in the northwestern Cana area in the Anadarko Basin’s Woodford Shale, primarily in Blaine and Dewey counties, which includes stakes in 37 producing wells. No production figures were included for the wells being sold, but Continental has eschewed natural gas drilling in favor of oil for some time.

“This joint venture [JV] is consistent with our strategy to enhance the value of all our assets,” said Continental COO Jack H. Stark. “The structure creates a joint venture that we expect will be cash flow positive for Continental throughout the life of the project and should deliver single-well economics that compete with any other wells in our world-class inventory when the carry is applied.”

The “headline math” equates to around $15,000/acre, according to analysts with Tudor, Pickering, Holt & Co.

Under terms of the agreement, Continental was to receive $90 million when the JDA was finalized. SK also agreed to pay $270 million to carry half of the remaining drilling and completion costs, or the drilling carry.

Continental’s capital spending plans, production mix and overall production targets in the area aren’t expected to change through 2015 as a result of the JV.

SK Group is one of the largest conglomerates in South Korea and is part of SK Holdings, a Fortune Global 100 company. SK E&A CEO J.J. Yu said the company looked forward to joining with Continental “in what we expect will be a long-term strategic relationship in energy production.”

Under the JDA, Continental has five years to use the carry, which could be extended. It also establishes an area of mutual interest (AMI) and incentives for the JV to expand its leasehold position. Continental would be the operator for all of the wells now and into the future.

Drilling within the AMI is to begin in November, with four operated rigs set to be running by the end of the year.

“Our agreement with Continental underscores SK’s 20-plus year commitment to the U.S. market as a platform for the globalization of our energy business and as a source of value-creation for stakeholders in both companies,” said SK E&S Americas President Shaun Parvez.