Continental Resources Inc. CEO Harold Hamm said he would use asset sales and reduce activity in the Midcontinent, including the Springer Shale, to pare down long-term debt, which stood at $6.56 billion at the end of June. 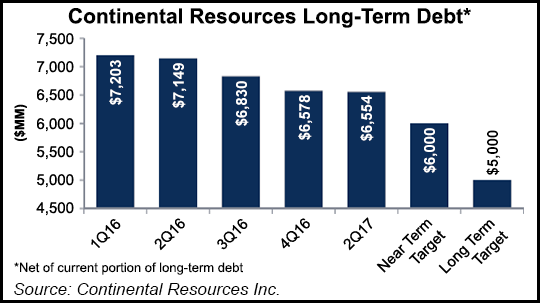 “One thing we have targeted, of course, is debt reduction [to] that $5 billion number,” Hamm said during the call. “We want to see that first” before potential dividends or share buybacks, “but absolutely spending within cash flow is really important to us. We’re doing that and actually have postponed some development and some very lucrative fields, like Springer…

“We’re going to be ready to go when the market turns, but absolutely no new debt. That’s part of our strategic plan going forward.”

The company also revised its capital expenditures (capex) guidance for the year to $1.75-1.95 billion. The revised capex would maintain cash neutrality, with West Texas Intermediate prices expected to be $45-51/bbl for the year. Previous capex guidance was pinned at $1.95 billion.

The company placed 19 gross operated wells in the Bakken Shale online in the second quarter, with an average 24-hour initial production (IP) rate of 1,606 boe/d, of which 82% was oil. Five of the wells ranked in the company’s top 10 in terms of all-time production for the Bakken, based on 30 days of production.

In the Midcontinent, Continental completed 36 gross (12 net) operated and nonoperated wells targeting the STACK (aka the Sooner Trend of the Anadarko Basin, mostly in Canadian and Kingfisher counties). By the end of August, the company expects to have nine operated rigs deployed in the STACK with seven targeting the Meramec formation, and two drilling into the Woodford.

Also in the Midcontinent during the quarter, Continental completed eight gross (two net) operated and nonoperated wells targeting the SCOOP, aka the South Central Oklahoma Oil Province) in the Anadarko Basin. Five rigs are deployed there, targeting the Springer, Sycamore and Woodford formations.

Continental expects to average 18 rigs for the remainder of the year, with 14 deployed in Oklahoma’s stacked plays and four in the Bakken Shale. The company expects to exit 2017 with a drilled but uncompleted inventory of 187-211 wells, including 155-160 in the Bakken and 32-51 in Oklahoma.

Meanwhile, the Oklahoma City-based independent has signed two separate agreements with undisclosed buyers to sell more than 32,000 net noncore acres and other assets in the Midcontinent’s stacked reservoirs and the Arkoma Basin for a combined $147.5 million.

The first agreement calls for the sale of 6,590 net acres in northern Blaine County, OK, for $72.5 million. The second sale for $68 million involves 26,000 net acres in the Arkoma-Woodford Shale across Oklahoma’s Atoka, Coal, Hughes and Pittsburg counties.

The company also selling is oil-loading facilities in Oklahoma for $7 million. The deals are subject to closing conditions and adjustments, and are expected to close in 3Q2017. Proceeds from the sales would be reduce outstanding debt.