Continental Resources Inc. raised its production guidance and increased capital expenditures (capex) for the year, as it plans to deploy more rigs in the Bakken Shale and a multi-year development program targeting Oklahoma’s myriad stacked reservoirs. 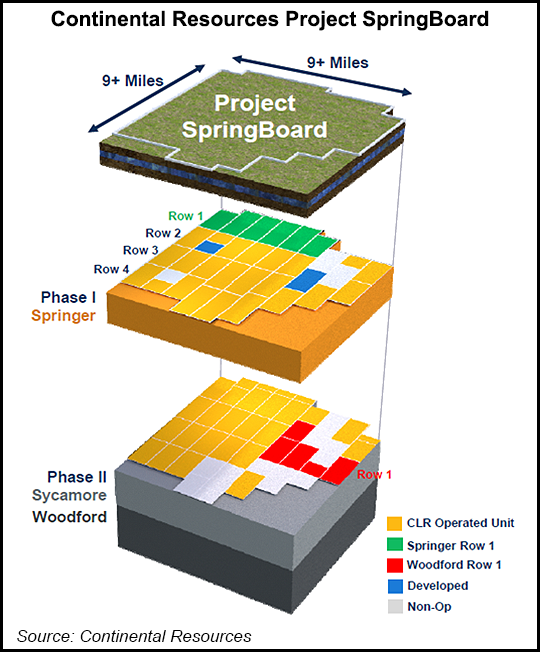 Production in Continental’s primary area of operations, the North Dakota portion of the Bakken Shale, was 151,805 boe/d during 2Q2018, a 35.1% increase y/y but down 1.7% sequentially. In the Midcontinent, the company saw production in the SCOOP, aka the South Central Oklahoma Oil Province, increase 6% y/y and 4.5% sequentially, to 64,786 boe/d. Production also increased 62% y/y, to 51,722 boe/d, in the STACK, aka the Sooner Trend of the Anadarko Basin, mostly in Canadian and Kingfisher counties, but production also fell from the first quarter by 3.1%.

“Our cost per well is remaining in line,” CFO John Hart said in an earnings call Wednesday to discuss 2Q2018. “We’ve talked about the productivity and the uplift we’re seeing in wells with the revised type curve and with the results that we indicated pretty much across all of our plays — STACK, SCOOP and the Bakken. We’re seeing exceptionally productive wells and strong uplift for very efficient deployment of capital.

“So, we feel good not only about being toward the higher end of our range for this year, but we expect that to continue improving as we go forward through the next few years to get back closer to our historical norm. Over the last 10 years, we’ve been in kind of the 20%-type range.

Continental plans to run an average of six rigs and five completion crews in the Bakken through the second half of 2018, ramping up to seven rigs by year’s end. About 125 additional wells in the Bakken should be completed, with first production by the end of the year, more than half of which would be brought online in 4Q2018. In Oklahoma, an average of 18 rigs and four completion crews are set to run through December, with the 19th rig added before the year is out.

Project SpringBoard, a multi-year oil development program in the SCOOP launched earlier this year, is moving forward, management said, with seven rigs targeting the Springer formation. Meanwhile, Continental also had four rigs drilling the second phase of the program, targeting the Woodford Shale and the Sycamore formation. It plans to add a third rig to the project’s second phase before the end of September, followed by a fourth rig in 4Q2018.