Executives with Continental Resources Inc. said the company’s expansion into Oklahoma’s stacked reservoirs has been vindicated. The plays there could add as much as 35% to Continental’s net unrisked resource potential, after seven wells completed in an over-pressured oil window showed strong initial results, they said. 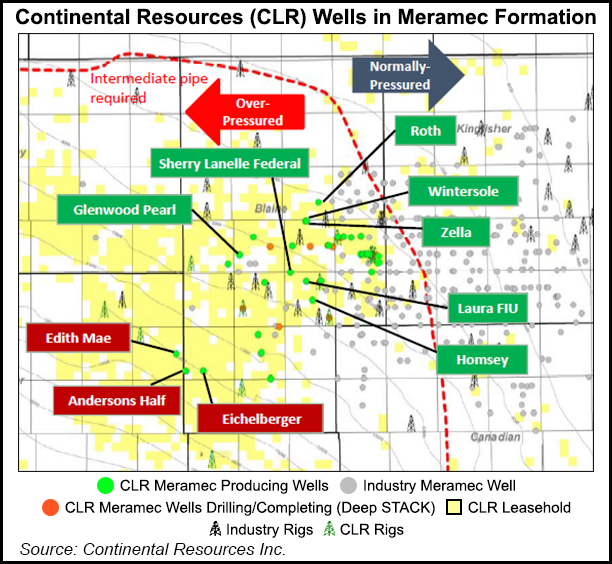 Consequently, the Oklahoma City-based company said it plans to spend $1.95 billion on capital expenditures (capex) in 2017, including $1.72 billion for drilling and completion (D&C) costs. Of the latter, Continental said it will devote 82% of the D&C budget to the top two oil plays in the country in terms of rate of return: North Dakota’s Bakken Shale, where it dominates, and Oklahoma’s STACK (Sooner Trend of the Anadarko Basin in Canadian and Kingfisher counties).

In the fourth quarter, Continental completed seven targeting the over-pressured oil window of the Meramec formation, which is part of the STACK. The wells had initial production (IP) ranging from 1,604 to 2,463 boe/d, with 55-73% crude oil. The company also began drilling and completing three wells targeting the over-pressured gas window of the play, which Continental since has dubbed the “Deep STACK.” IP rates from the three gas wells ranged from 20.1 to 22.2 MMcf/d, and they also produced 49-84 b/d of crude oil.

“Bottom line, we couldn’t be more pleased,” COO Jack Stark said during an earnings conference call Thursday to discuss 4Q2016. “These are exceptional gas wells and clearly could be produced at higher rates. We currently estimate these Meramec wells to recover in excess of 20 Bcf each and deliver a 50% rate of return at $3.50/Mcf gas and a complete well cost of $11 million.

“The performance of these three wells once again demonstrates the tremendous resource we have underlying our acreage and STACK. Deep STACK is another significant discovery for Continental, and we’ll provide more details in the future.”

During the Q&A portion of the call, Stark called one of the Deep STACK gas wells — the Andersons Half 1-30-19XH — a “very impressive and prolific well,” but added Continental is unlikely to perform a lot of drilling in the area anytime soon.

“[Andersons Half] was so good that we felt that we needed to step back and see if we could confirm those kind of rates, and we did with the two offsets,” Stark said. “So we’re very comfortable that we have a very significant gas asset there. But we’re comfortable now that we’re going to be able to HBP [hold by production] that with the drilling that we’re doing underneath our Northwest Cana JDA that we’ve got with SK.

“So, we’re probably not going to do is a lot of drilling down there in near-term outside of what we’re doing through the JDA, and that’s really effectively HBP-ing our acreage.”

Stark added that the seven aforementioned wells completed in the oil window support the company’s 1.7 million boe/well type curve. Continental holds 200,000 net acres in the Meramec, and has added about 64,000 net acres since August 2015.

Continental plans to deploy 20 rigs in 2017, including six in the STACK. The company will also run five rigs in the South Central Oklahoma Oil Province (SCOOP), four in the Bakken, and five in other areas, including the northwest Cana-Woodford Shale, where it has ajoint development agreement (JDA) with SK E&S, a subsidiary of South Korea’s SK Group.

The company said it projects a total of 218 net wells will come online with first production in 2017, including 100 drilled but uncompleted (DUC) wells in the Bakken. Another 43 new wells are expected in the Bakken, plus another 43 in the STACK, 24 in the SCOOP, and eight from the JDA.