Continental Resources Inc. said it plans to add two completion crews to the Bakken Shale after posting strong results from enhanced completions tests in the play during the third quarter. 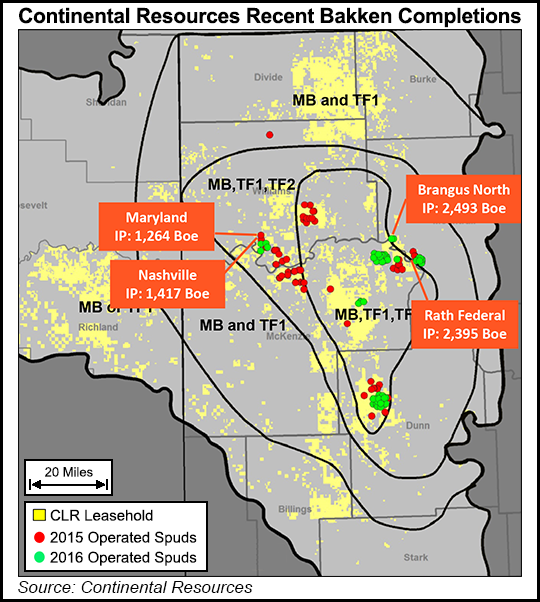 Meanwhile, as Continental looks to work through its inventory of drilled but uncompleted (DUC) wells in the Bakken, results from an eight-well Meramec density test in the overpressured oil window of the STACK (short for the Sooner Trend of the Anadarko Basin, mostly in Canadian and Kingfisher counties) show a promising future drilling in the Midcontinent, management told analysts during a 3Q2016 conference call last week.

Management said the E&P will be going from two to four stimulation crews in the Bakken as it continues to test enhanced completion designs. The company touted record 30-day production rates for its 9,900-foot-lateral Brangus North and 13,800-foot-lateral Rath Federal wells, both completed with higher proppant volumes of up to 1,000 pounds/lateral foot. Brangus North produced 51,800 boe (86% weighted to oil) in its first 30 days, while Rath Federal produced 43,300 boe (84% oil), the E&P said.

Continental operated four drilling rigs in the Bakken during the quarter, with no plans to increase that number given its drilled but uncompleted (DUC) inventory, CEO Harold Hamm said.

“We’re not looking at increasing rig activity” in the Bakken, he said. “We’ve got a lot of uncompleted wells here, and we made the decision that once the fundamentals had shown that supply and demand had balanced, then we’re confident on oil prices, and so, we start moving forward.

The Ludwig spacing test consisted of four Upper Meramec and four Middle Meramec wells with average laterals of 9,700 feet. The wells were spaced 1,320 feet apart in the same zone and 660 feet apart between zones, with 100 feet of vertical separation, according to the E&P. Average costs for the wells totaled $7.8 million/well, compared with $11.1 million for the initial Ludwig well, which Continental attributed to the efficiencies of multi-well pad drilling.

The Ludwig unit wells would generate a rate of return over 100% at $50/bbl West Texas Intermediate and $3/Mcf, Continental said.

Moving forward, Hamm said the E&P anticipates “slow but steady growth in both supply and demand, with prices moving gradually higher.” No matter what action the Organization of Petroleum Exporting Countries (OPEC) takes, he said, “we believe world energy markets are at a turning point.

“For the first time since OPEC was founded 56 years ago, markets are increasingly driven by free market forces. Foreign producers will have less power to manipulate the crude oil market because there are multiple sources for supplied capacity growth, most notably the leading U.S. shale plays.”

Third quarter Bakken production declined sequentially, with North Dakota Bakken output averaging 99,251 boe/d, down from 114,554 boe/d in the second quarter. Continental said it curtailed Bakken production by around 12,000 net boe/d in August and September in response to commodity prices, with the curtailed volumes brought back online at the end of 3Q2016.

Total third quarter production across all Continental operating areas was 19.1 million boe, or 207,840 boe/d, down 5% from the second quarter and down 9% year/year.