Continental Resources Inc. said it expects to save about $125 million in capital costs by shifting to 30% longer laterals within Project SpringBoard, a multi-year program to develop its oil and liquids-rich assets in Oklahoma’s myriad stacked reservoirs. 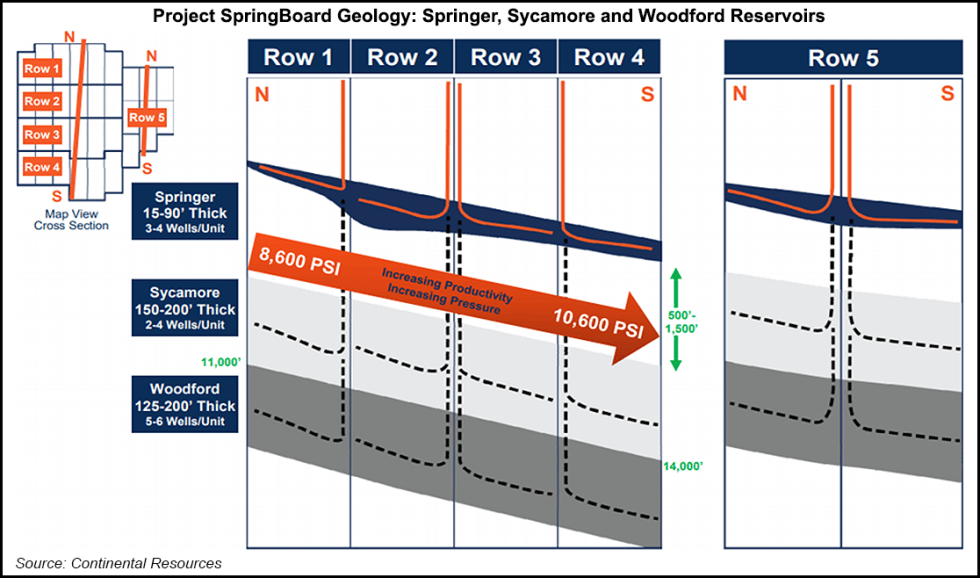 But the update on SpringBoard provided Tuesday by the Oklahoma City-based independent had mixed news for investors. While management said the project is on pace to grow net oil production by 10% from 3Q2018 to 3Q2019, estimated ultimate recovery (EUR) rates per lateral foot and rates of return (ROR) would be lower compared to previous type curves.

“We’re talking about reducing the total capital invested in this project by 20%,” President Jack Stark said of SpringBoard, which was launched in 1Q2018. “What you would calculate as degradation in EUR per foot is less than that.”

Continental plans to use 9,800-foot laterals, up from 7,500 feet, which should increase well costs by 5% to $10 million, but drilling efficiencies would lower the cost/lateral foot by 20%. That said, while EURs per well are projected to increase 8%, to 1.3 million boe, up from 1.2 million, some analysts were projecting EURs/lateral foot would decrease by 17%.

The company also unveiled a new type curve for SpringBoard wells targeting the Springer Shale within SCOOP, aka the South Central Oklahoma Oil Province. The new type curve shows a 60% ROR under a West Texas Intermediate (WTI) price of $50/bbl, increasing to 90% ROR at $60. By comparison, a type curve released last November shows a 150% ROR at $60, but assuming a target EUR of 1.2 million boe and a 7,500-foot lateral.

“When you look at the project as a whole, you have to look at the total number of wells being drilled that were originally projected and where we’re at,” Stark said. “The reserves are perhaps off maybe 15-20% compared to what maybe we were anticipating early on for the project as a whole, but we’re saving over 20% on the total project investment. We’re just continuing to basically perfect our model here of development to maximize the return on every dollar we spend.”

For 2019, Continental is targeting a 16% reduction in completed well costs for SpringBoard wells and a 35% reduction in cycle times compared to the first row of 18 wells completed in 2018 that targeted the Springer Shale. Future wells are to target the Woodford Shale and the Sycamore formation.

Continental is scheduled to hold its 4Q2018 earnings call on Feb. 19.