U.S. independent Contango Oil & Gas Co. plans to boost its natural gas production by more than half later this year with the acquisition of ConocoPhillips’ conventional assets in Wyoming’s Wind River Basin for $67 million. 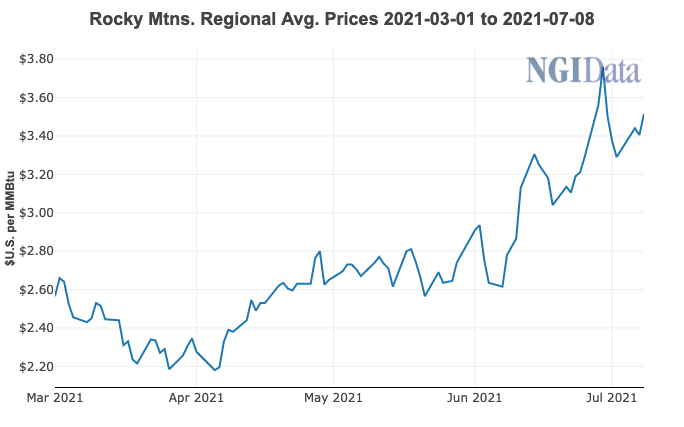 The assets are estimated to have a net production run rate of about 78 MMcfe/d as of July 1. They are expected to increase Fort Worth, TX-based Contango’s run rate production by 57% after the deal’s planned 3Q2021 closing.

“This is a huge, conventional gas field with low decline, purchased at an attractive valuation,” Contango CEO Wilkie Colyer said. The decline rate is pegged at 5%/year over the next five years.

According to a March factsheet on the ConocoPhillips website, the Wind River operations area consists of the Madden field and Lost Cabin Gas Plant in the Wind River Deep Unit. The unit covers about 44,000 net acres in Fremont and Natrona counties. Multiple horizons are targeted ranging in depth from 5,000 feet to 26,000 feet. They include the Lower Fort Union, Mesaverde, Lance, Cody and Madison formations.

The Houston-based independent also has “small” interests in nonoperated Wind River assets, according to the factsheet.

“ConocoPhillips has a strong position in the Wind River Basin, but the assets are not competitive in attracting capital in our portfolio,” a spokesperson told NGI’s Shale Daily. “The transaction is not expected to have a material impact on 2021 capital or production guidance.”

The world’s largest independent recently bulked up its Permian Basin holdings with the acquisition of Concho Resources Inc. The deal made ConocoPhillips one of the dominant producers in the basin, the top producing oilfield in the United States.

More recently, Contango announced it would merge with privately held Independence Energy LLC. The combined company is expected to produce more than 100,000 boe/d in 2022.

Colyer said the Independence merger “was designed to accelerate our acquisition pace rather than slow it down, and this transaction is a perfect example of that.”

Contango plans to fund ConocoPhillips’ purchase with a mix of cash on hand and a draw on its revolving credit facility.