In a move to lower its greenhouse gas (GHG) emissions, Michigan public utility Consumers Energy announced it would purchase four natural gas-fired power plants as it aims to transition away from coal by 2025. 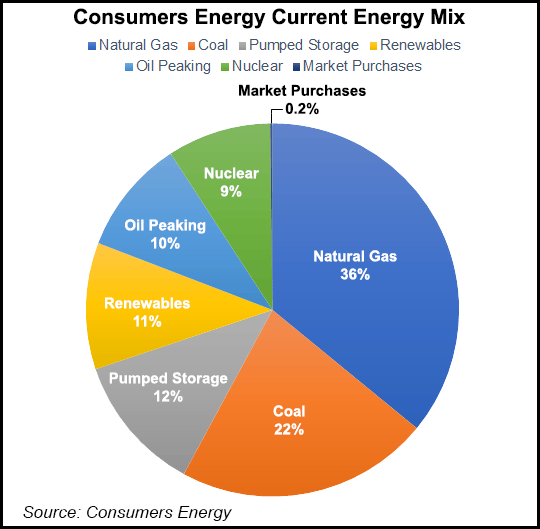 In its latest clean energy plan, the Jackson, MI-based utility said it expects to be one of the first utilities in the country to end electricity generation from coal by 2025. The company said 22% of its current energy comes from coal.

As for natural gas, Consumers Energy generates 36% of its electricity from the fuel. However, the utility aims to have 40% of its generation come from natural gas by 2025. That boost would be short-lived, however, as the company expects to produce at least 60% of its energy from renewable resources by 2040. By then, only 10% of its energy will be powered by natural gas, with the remaining 30% coming from energy storage or customer efficiency programs.

Currently, renewables only make up about 11% of the utility’s mix. In order to achieve its renewable energy target, Consumers Energy said it will work to add about 8,000 MW of solar power by 2040.

According to the utility, by using natural gas as a bridge fuel while Consumers Energy increases its solar generation, the updated plan could save customers $650 million compared to the previous plan.

While the utility may be adding roughly 2,180 MW of natural gas-generation to its mix, Consumers’ Clean Energy Plan also calls for the closure of Karn 3 and 4, natural gas- and oil-fired generators that produce more than 1,100 MW, by 2023 — eight years ahead of schedule.

Should the Michigan Public Service Commission approve Consumers’s plan, three coal-fired units at the Campbell generating station will also be closed by 2025. Campbell 1 and 2 may be closed six years ahead of schedule, while Campbell 3 would be shut off 15 years before its scheduled retirement. Altogether, the Campbell coal generation units represent 1,440 MW of electricity generation.

Consumers Energy said it has plans to assist workers as the utility leaves coal plants behind. “We supported employees and communities impacted by our 2016 coal retirements by finding new roles for workers who wanted to stay, fulfilling our environmental responsibilities at the sites and helping local leaders pursue new economic possibilities,” said Consumers Energy senior vice president for governmental, regulatory and public affairs Brandon Hofmeister. “We plan to follow the same philosophy to help those affected by the proposed Campbell and Karn retirements.”