FERC has granted another two-year extension for Constitution Pipeline to enter service as the sponsors continue to exhaust all legal options in their nearly three-year battle against the New York State Department of Environmental Conservation (DEC), which denied a key permit. 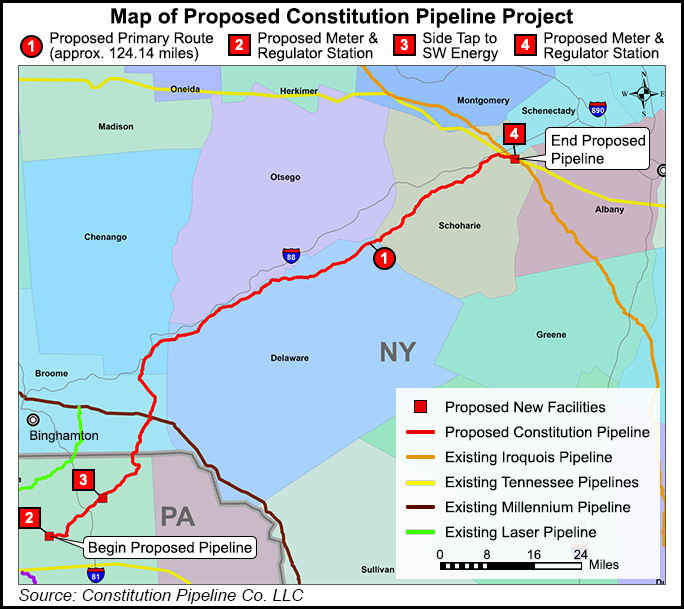 The Federal Energy Regulatory Commission’s order extending the time Constitution Pipeline Co. LLC has to build and place the project into service came after the company filed a request in June. A previous extension was set to expire this month. The project now has until Dec. 2, 2020 to come online.

Constitution in 2014 received a FERC certificate authorizing construction and operation. But sponsors have battled the DEC since 2016, when after nearly three years of regulatory review, the agency denied the section 401 water quality certificate (WQC) required under the Clean Water Act. FERC concluded in its latest order, issued on Monday, that extending the project’s deadline to six years after it issued the certificate is still reasonable.

“The Commission has frequently authorized infrastructure projects with initial deadlines of four, five or six years, without expressing concerns about the certificate order’s economic or environmental findings becoming stale,” FERC wrote in the order.

Since DEC denied the WQC, mainly over a disagreement about trenchless crossings and the agency’s contention that it didn’t have enough information to determine the environmental impacts, Constitution has bounced through the regulatory and legal process.

The company petitioned the U.S. Court of Appeals for the Second Circuit to review DEC’s decision. A three-judge panel denied that challenge, ruling that DEC is entitled to its regulatory review under relevant federal laws. Constitution later petitioned the court for a rehearing of the case en banc, which was also denied. The project then petitioned the U.S. Supreme Court to hear its appeal without success.

FERC also has refused to waive New York’s regulatory authority. In September, Constitution petitioned the U.S. Court of Appeals for the District of Columbia (DC) Circuit to hear a challenge against the Commission’s waiver order. The DC Circuit on Monday delayed the case, deciding instead that it would first hear another matter challenging FERC’s jurisdiction over a hydroelectric project that poses similar questions regarding WQCs.

Constitution is not alone in the resistance it has faced in New York, where regulators have denied key permits for other natural gas infrastructure projects. Under Democratic Gov. Andrew Cuomo, the state continues to promote renewable energy generation and emission reductions.