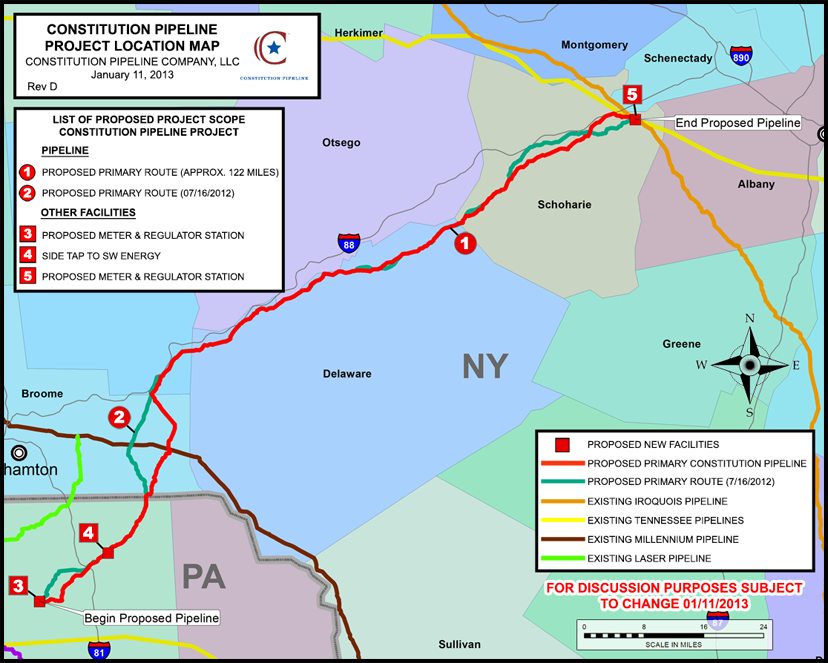 “Our involvement in the Constitution Pipeline is a demonstration of our continued execution of our strategy to grow our portfolio of infrastructure assets,” said WGL CEO Terry McCallister. “The project also adds incremental earnings growth from a regulated investment.”

The 30-inch diameter gas line initially would carry up to 650,000 Dth/d from Susquehanna County, PA, interconnecting with the Iroquois Gas Transmission and Tennessee Gas Pipeline systems in Schoharie County, NY.

Cabot, one of the biggest Marcellus operators, agreed to ship 500,000 Dth/d, while Southwestern Energy Services Co. has signed on for150,000 Dth/d (see Shale Daily, April 27, 2012). Piedmont, a distribution company that serves more than one million customers in the Carolinas and Tennessee, is investing $180 million, but it would not be a customer (see Shale Daily, Nov. 14, 2012). With CEV’s participation, Williams Partners’ majority stake (51%) falls to 41%. Cabot would continue to own one-quarter of the project, while Piedmont has a 24% interest.

Constitution officials said they expect to file an application in June with the Federal Energy Regulatory Commission to begin the project. With permits and regulatory approvals in hand, construction is scheduled to start in the second half of 2014. The 121-mile project now has a start date of March 2015.

Earlier this year the partners proposed a revised primary route to include fewer acres of total land impacts during construction and fewer residences within close proximity to the line (see Shale Daily, Jan. 22). Constitution is working with New York-based gas supplier Leatherstocking Gas Co. LLC on agreements for delivery interconnects along the pipeline’s proposed route, essentially converting it to an “open access pipeline” (see Shale Daily, Nov. 7, 2012). In addition, Constitution reached an agreement with Iroquois to expand the existing Wright compressor station, eliminating the need to build a 32,0000-hp compressor facility in Schoharie County.