The Marcellus Shale continued to drive significant production gains for Consol Energy Inc. in the second quarter, while its program in the Utica Shale is picking up pace and expected to account for a larger portion of volumes by the end of this year. 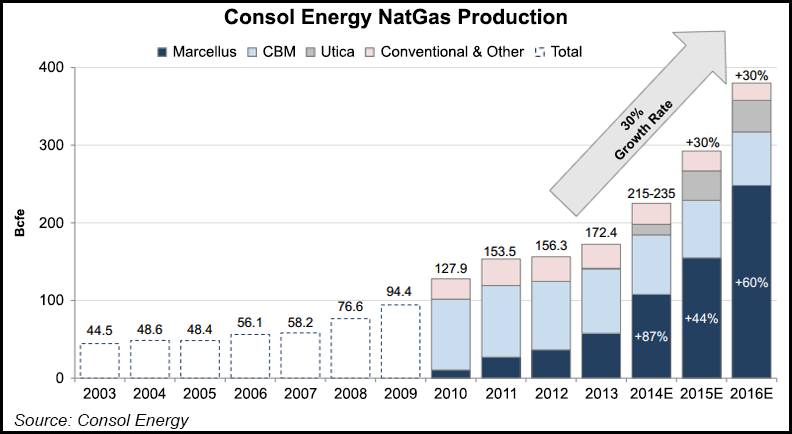 In January, Consol said the Marcellus would account for nearly half of its 2014 production (see Shale Daily, Jan. 24).

The company said Tuesday that quarter-over-quarter Marcellus production increased 129% in the second quarter and accounted for much of the 51.9 Bcfe it produced, which is up from the 48.4 Bcfe it produced in 1Q2014 and the 38.6 Bcfe produced in 2Q2013.

The company completed 51 Marcellus wells last quarter and turned in-line 35 others, while it completed 12 wells and turned in-line three in the Utica, where it has more recently switched its focus from the northern part of the play in Ohio to the south as other operators have (see Shale Daily, June 3; Nov. 19, 2013).

Second quarter production was roughly in-line with guidance, but the company expects its Marcellus and Utica programs to be back-end weighted this year, with 70% of its sales connections expected to be completed during the second half of 2014. As a result, Consol increased the low end of its full-year guidance from 215 Bcfe to 225-235 Bcfe.

Consol now expects the Utica to make up about 6% of its production this year, with the rest coming from coalbed methane and shallow oil and gas targets. It said Tuesday that it expects to turn in-line eight to 13 Utica wells in the third quarter.

The company turned the three-well NBL19 pad in Noble County, OH, into sales last week. The pad had initial production rates exceeding 23 MMcfe/d on a controlled pressure drawdown. At three other pads nearby, 10 wells are in various stages of development and expected to be put into sales between August and October.

Consol said it drilled its longest lateral in company history at the NV34G well in Washington County, PA, at 10,970 feet in the second quarter. An eight-well pad was also brought online in the county last quarter, the WFN6, where the best Marcellus well tested at a 24-hour rate of 10.4 MMcf/d.

The company also said it had recompleted six Marcellus Shale wells in Greene County, PA, that were originally finished and turned to sales in 2009. At that time, the wells were flowing at less than 1 MMcf/d, but two of the recompletions are now on sales with 24-hour flow rates above 4 MMcf/d.