After years of working to rebuild the core of its business to evolve around natural gas production, Consol Energy Inc. said Tuesday that a subsidiary has filed a registration statement with the Securities and Exchange Commission to spin-off its remaining coal assets into a separate publicly-traded company. 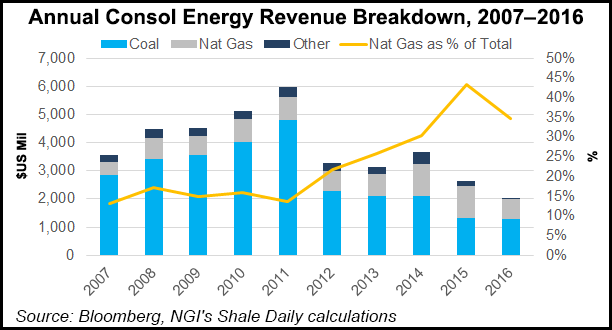 A spokesman said the company is aiming to take the new coal business public as early as 4Q2017. When that happens, the independent publicly-traded exploration and production (E&P) business would drop the Consol name altogether and be rebranded, the spokesman said.

Consol Mining Corp. filed the Form 10. The coal business would consist of the Pennsylvania Mining Complex, which includes three longwall mines in the southwest part of the state, and a related coal preparation plant. It would have an ownership interest in CNX Coal Resources LP, a publicly traded master limited partnership that was established with Consol’s thermal coal division in 2015. Other assets would include a coal export terminal in Baltimore; undeveloped coal reserves throughout the Appalachian and Illinois basins and related liabilities.

Tuesday’s announcement is another significant step for Consol’s transition to a pure-play E&P company. More than 150 years-old, Consol has its roots in coal production, but those operations have dragged down its balance sheet in recent years as the commodity has struggled. The company produced 24.6 million tons of coal in 2016, down from 29.3 million tons the year before.

Over the same time, natural gas production increased more than 20% to 1.09 Bcfe/d. Consol has more than four million net acres prospective for the Marcellus and Utica shales, along with coalbed methane and other formations in Appalachia.

The company has sold billions of dollars of coal assets in the last five years and considered selling the remaining assets to a third-party. It has also faced pressure from investors to separate the natural gas and coal businesses to unlock more value for shareholders.

Jimmy Brock, who has lead the coal business, has been appointed as CEO of the new spin-off and is joined by former Senior Vice President of Diversified Business Units Katharine Fredriksen as president. After the separation, Consol CEO Nicholas Deluliis would remain in his current position to lead the new E&P business. Current CFO David Khani would make a shift in August to take his role at the coal business and be replaced at the E&P as CFO by Don Rush, 34, who currently serves as vice president of energy marketing for Consol.