In Ohio’s sleepy Switzerland Township, the hum of a horizontal drilling rig can be heard again. Consol Energy Inc.’s Switz 16 pad in Monroe County was one of its last sites to see any action before the company hunkered down and idled its drilling program last year, like other operators did in the Appalachian Basin. 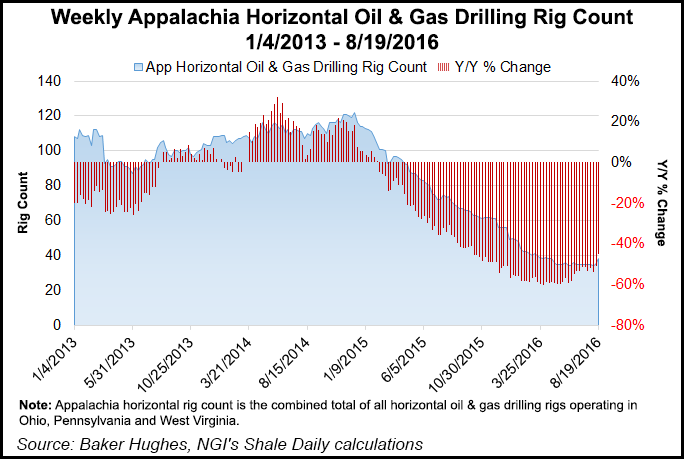 But the rigs are slowly coming back in the Marcellus and Utica shales. Fading natural gas supplies, a dwindling inventory of drilled but uncompleted wells (DUC), lower rig counts and more demand from the power sector and for exports has prompted many Appalachian operators to drill again or bring on more manpower to complete wells.

Consol came back to the Switz 16 earlier this month after management said in July an improving gas market and more than a year of intense cost-cutting would allow it to put two rigs to work in the Marcellus and Utica (see Shale Daily, July 26). Patterson-Uti Energy Inc.’s Rig 801 spud the Switz 16D dry Utica well on Aug. 15. Two days later, the bit had reached 768 feet before the crew stopped to let the well cleanup and talk with a reporter about how glad they were to be back in the field.

“It’s a good feeling,” said Consol’s Drilling Manager Luke Beebe. Patterson’s rig, like others across the basin, had been stacked in a storage yard somewhere between Uniontown and Smithfield, PA, in Fayette County. It took a crew about seven days to assemble the rig once it arrived on site and Beebe said he was happy to be working rust off the equipment. The Switz 16D will take about a month to drill, one of five that Consol has planned for the pad, including the DUC that was drilled before the company packed up last year.

Before the month is over, Consol plans to bring in a second rig for its nearby Switz 5 pad to drill three other Utica wells before the program moves east to drill another two Marcellus wells in Washington County, PA. As Consol ramps back up, Vice President of Gas Operations Craig Neal said drilling times would decline, adding that “starting up like this takes more attention and focus.”

Just down the road from the Switz 16 pad, another company’s rig was up and running, which to those at Consol’s site was encouraging. “This is a big deal for us,” Neal said.

When the second quarter ended, a host of Appalachian-focused exploration and production companies said in one way or another that they would increase their activity (see Shale Daily, Aug. 19). Management teams across the basin said they would either add rigs, ramp-up completions or increase their budgets to get more done in preparation for 2017. Consol’s 10 wells, Neal said, would all be turned in line next year.

“I think we can only control our own budget, our own activity; supply and demand will take care of that,” Neal said of gas production ticking back up and the cautious optimism for what’s ahead after more than two years of bad times for the industry. “If we see prices that tell us to keep going, that’s what we’re going to do. If we see prices that tell us we should put some DUCs in inventory or stop drilling, that’s what we’ll do.

“We’re going to really monitor that as closely as we can,” he added. “But dry gas production is in decline. These wells have a pretty steep decline the first year; it takes a number of wells to just maintain production. We’re running two rigs. During the peak, we were running eight rigs. A number of similar companies are in the same shape. Of course two rigs now generate more production than they used to, but I think everybody’s being cautious about what they’re doing right now.”

U.S. gas production bottomed out at about 69 Bcf/d in July. Prices averaged $2.61 in 2015 and the 2017 strip is averaging just above $3 with futures recently weakening (see Daily GPI, Aug. 19). While the Appalachian Basin is on track to be the only region in the country to post year/year gains, operators here know they’re not in the clear yet.

“I suspect they won’t add too many more rigs over and above what has been announced for the rest of 2016. For one, commodity prices have declined a bit here in recent weeks on both the gas and oil sides, so that may delay things,” said NGI’s Director of Strategy and Research Patrick Rau. “There are so many idle drilling rigs right now that producers can afford to wait a bit to drill without having to worry about drilling rig spot prices moving dramatically higher.

“If natural gas prices do go higher in the short-term, [Appalachian] operators can also increase the pace of completing their DUCs, which of course do not require drilling rigs and are much cheaper than drilling new wells,” he added. “I suspect you’d see more of that happen before we saw a major spike in the rig count in 2016.”

Even still, the site of a derrick on the horizon is reassuring for those that work in the gas patch. Patterson recently brought back workers at locations across the country, including three that went to work at Consol’s pad, the company’s rig manager there toldNGI’s Shale Daily. Neal, an industry veteran of more than 30 years, said the downturn that began in mid-2014 is the worst he’s worked through.

Beebe and Neal said the company spent the last year preparing for this month, building up permitted sites and studying production optimization at thousands of the company’s wells in anticipation of getting back to work. The Switz 16, Neal said, is building off the lessons Consol learned at its nearby Switz 6 pad, where the company tested different proppants and interlateral spacing.

“That pad has allowed us to do a lot of analysis to determine what proppant to use in certain areas,” he said. “We will continue to change some variables in completions to optimize those. What you can afford to do at this gas price and what you can afford to do at a higher price are maybe two different designs, and you’re going to have to be flexible with those designs.”

The Switz 16D will be drilled to a total vertical depth of 10,400 feet and have a lateral of 9,900 feet. The horizontal rig will run day and night and represents Consol’s drive for efficiency. It’s eliminated top-hole rigs and will stick with horizontal rigs to drill each leg on all of its wells, Neal said.

The Utica now represents about 25% of the company’s overall production. Like other operators, Consol has been drawn to the formation for its lower breakevens and more prolific wells. It’s also entirely focused on natural gas. It’s sold $5 billion in coal assets since 2012 and now has just one coal mine in its portfolio that’s operated by CNX Coal Resources LP, which was formed by Consol last year to untether its balance sheet from those assets.

At the end of last week, there were 39 rigs running in the Appalachian Basin, up from 36 in the prior week. Rau noted that while the rigs coming back in the region are limited by 2016 budgets, they’re also being deployed with an eye toward 2017, “so it is [operators’] views on next year that will drive upcoming rig additions.” Whenever the recovery comes, Neal said the difference between this downturn and others he’s been through would be his role in “the lowest cost gas basin in the country that’s essentially going to be the first to bring back activity and gas production.”