Consol Energy Inc. and Pennsylvania’s Allegheny County Airport Authority (ACAA) have unveiled a drilling proposal for Pittsburgh International Airport property that would allow 47 wells to be drilled into airport property overlying the Marcellus Shale, with the potential to explore Upper Devonian targets. 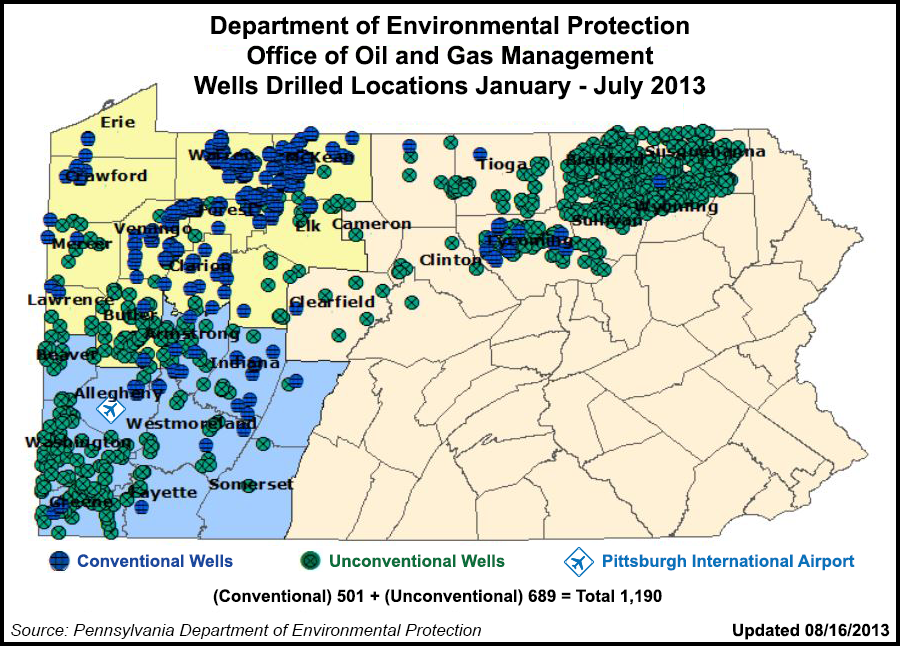 Consol officials could not clarify the leasehold’s potential until drilling is under way and core samples are completed, now estimated for the second half of 2014. As envisioned, there would be six well pad locations and three centralized water impoundments.

“Consol Energy and ACAA have been working diligently over the past several months to develop a drilling plan that we are confident will allow us to safely and compliantly access the natural gas located at the airport property while minimizing our environmental and operational impacts,” said Consol Energy President Nicholas J. DeIuliis. “This project represents a once-in-a-lifetime opportunity to generate significant economic benefits for the residents of Allegheny County, and we take our responsibility to get it right very seriously. We intend to make it a flagship for the region that everyone can be proud of.”

Construction of the well sites, centralized impoundments and pipelines is to begin the first half of 2014, with drilling activity set to start in July using two vertical rigs. Once horizontal rig operations start up, the vertical rig count would drop to one, with both vertical and horizontal drilling to run “for the duration of the project through 2018.”

About 17 miles of natural gas lines are to be built, including 11 on ACAA property. Twelve miles of water lines would be used to deliver gas to market and provide water for well completions, Consol Energy said. There are no plans to construct public roads on airport property; Consol intends to rely on existing roads “without any disruption to daily airport traffic.” Several access roads would be on and adjacent to airport property, however.

“The economic opportunity that this project brings to our region is unparalleled,” said Allegheny County CEO Rich Fitzgerald. “This is a huge public works project, totaling nearly $500 million, and will be putting many of our people to work. The expected revenues will allow us to lower costs at the airport and attract additional flights. It ensures that our taxpayers do not have to pick up additional costs at the airport and allows us to support infrastructure and other development near the airport easing the burden on taxpayer funds, which, ultimately, leads to additional jobs and growth for our region.”

U.S. Rep. Tim Murphy, who represents District 18, said the state’s “abundant reserves of safe, reliable natural gas are bringing thousands of jobs to the region and much-needed revenue into Pittsburgh International Airport so it once again serves as an economic catalyst for southwestern Pennsylvania.”

Consol Energy and the ACAA have begun an environmental assessment (EA) that would be reviewed by the Federal Aviation Administration. The final EA document is scheduled to be submitted for approval to the FAA by ACAA in December.

“We are at an important point in the planning process where we encourage residents to learn more about oil and gas development plans at Pittsburgh International Airport,” said ACAA Chairman David Minnotte. “As part of the environmental assessment process, public comments and questions are being accepted at FlyPittsburgh.com and will be included in the FAA proposal.”

Seismic testing at the airport is scheduled to begin in late October. Survey and recording crews expect to gather data over a one-to-two week period that would parallel about 33 miles of surrounding roadways. Consol Energy also engaged a consultant to conduct a sound study, which entailed recording sound levels at a range of lengths from several of its current Marcellus locations during various stages of development. Early results from the sound study “indicate that drilling activities will meet the township ordinance and will not result in a significant impact.”