Consol Energy Inc. on Monday braced investors for what it said would be a lackluster second quarter earnings report, announcing that it would include a loss of profit and a “significant impairment” on its legacy oil and natural gas assets. 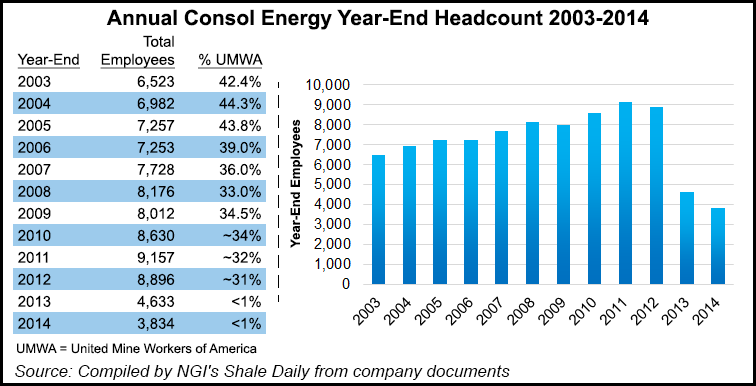 While the company said it expects to hit its second quarter production guidance of 71-75 Bcfe, it warned that lower commodity prices dented earnings for the period. The caveat comes after an announcement last week that the company would lay off another 470 employees in its coal and gas divisions in addition to administrative positions (see Shale Daily, July 14). So far this year, Consol has announced more than 600 job cuts in response to the downturn.

The company is also expected to detail further cost-cutting initiatives, including a shift in its operational strategy, next week when it holds a conference call to discuss second quarter earnings. A Consol spokesman could not provide any more details until then. During the call, however, the company said it would discuss its plan to “generate free cash flow over the next 18 months,” while maintaining annual gas production growth of 30% this year and 20% in 2016.

Consol employed 3,834 people at the end of last year. In April, it announced more than 160 layoffs in its gas division, CNX Gas Co., but it has been forced to cut thousands of coal jobs over the last decade (see Shale Daily, April 10). Last month’s coal spin-off last was geared toward a broader strategy that has the 150 year-old company transitioning to one more reliant on its natural gas assets than its traditional coal operations.

Consol cut its exploration and production budget from $1 billion last year to $920 million this year (see Shale Daily, March 13). It also said Monday that the carrying value of its shallower oil and natural gas assets have declined steeply with forward prices on the New York Mercantile Exchange. The company said it would take a non-cash impairment on those assets.