As its operational footprint in Ohio has continued to shift toward the southeast, following an intensifying pattern of other operators moving toward the Utica Shale’s core, Consol Energy Inc. last month closed its northeast Ohio field office in Columbiana County. 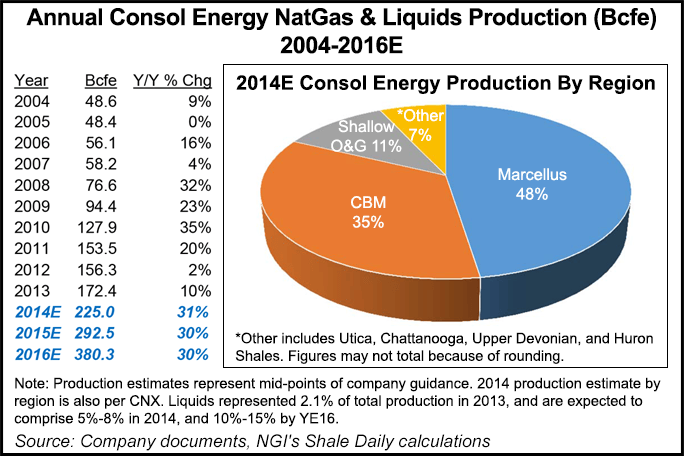 The move drew another round of speculation from local news media. Reports suggested that Consol was going the way of other operators that have seemingly fallen on hard times in the Utica’s northern tier. Some acreage in northeastern Ohio has produced underwhelming results, leading in recent months to BP plc writing off its program in Trumbull County (see Shale Daily, April 29) and Halcon Resources Corp. to restrain its development in Trumbull and Mahoning counties as it awaits more well results (see Shale Daily, March 5).

A Consol spokesman, though, said a “pull out” couldn’t be farther from the truth. He said to suggest Consol was somehow focusing less on Ohio was contrary to a company growth strategy aimed at shifting away from coal and moving more toward oil and natural gas , which the Utica factors into heavily (see Shale Daily, Jan. 31; Oct. 28, 2013).

But in the last year or so, the play’s prospects have shifted toward prolific gas fields and rich-gas fairways farther to the south in Harrison, Guernsey, Belmont and Noble counties (see Shale Daily, Nov. 19, 2013). Operators continue testing those boundaries and some are now pushing farther south into Ohio’s Washington and Morgan counties, while others expect big returns from the Utica in West Virginia (seeShale Daily, May 16; March 26).

Consol has 44 horizontal Utica permits in Ohio, most of which are in Noble County. It also has a Utica joint venture with Hess Corp. and company officials told NGI’s Shale Daily that it is concentrating on both Noble and Monroe counties.

As a result, Consol chose not to renew its lease for the office space in Columbiana County and instead decided to shift its personnel in that office to St. Clairsville in Belmont County, which has transformed into a minor boom town of sorts, playing regional host to many of the play’s exploration and production companies and midstream operators.

The 15 employees in that office will now work at the St. Clairsville location, Consol said. Port authority CEO Tracy Drake said he wasn’t surprised by the company’s decision not to renew its lease at the industrial park, given some of the results operators have seen in southern Ohio as of late. The port authority has already agreed to lease some of the 12,000 square feet previously rented by Consol to an aluminum extrusion company.

Consol already has three producing wells in northeast Ohio, with crews working to tie in another two expected to be in sales by July. Although the company expects the Marcellus Shale in Pennsylvania to account for about 48% of its total production this year (see Shale Daily, April 30), officials said Ohio’s Utica Shale will continue to account for a larger portion of annual production going forward.

“We’ve creeped south and eastward with our operational footprint and we’ve moved our field office to St. Clairsville to align our administrative functions,” the spokesman said. “This is not at all about our acreage in the north, the Utica is going to be a big player in our growth and nothing about that has changed.”

The company has said it plans to increase its natural gas exploration and production, but operations in the Utica will likely play only a supporting role over the next few years as Marcellus operations remain center stage.

“Consol Energy has aggressive plans to grow its natural gas production, with company guidance calling for ~30% annual production growth through 2016,” according to Pat Rau, NGI director of strategy and research. “However, the Utica Shale will likely be a relatively small contributor to that total. Consol estimates that its ”Other’ category, which includes production from the Utica, Chattanooga, Upper Devonian, and Huron Shales, will comprise just 7% of total company production in 2014.”