ConocoPhillips raised expected savings on its 2021 acquisition of Concho Resources Inc. to $1 billion and lifted its planned share buybacks by the same amount, a show of confidence in the deal and the company’s outlook as it emerges from the pandemic. 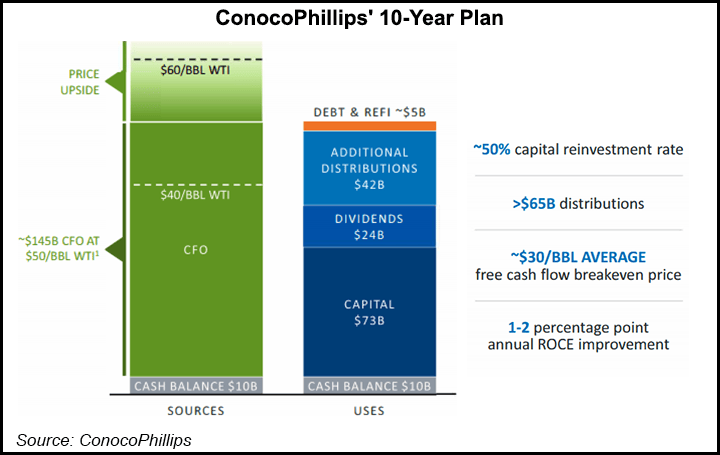 The upbeat tone emerged during a market update Wednesday, during which executives emphasized expense discipline and a focus on returns to shareholders.

“I’ve never seen an integration work as collaboratively as the one between ConocoPhillips and Concho,” CEO Ryan Lance said during the market update call. “I truly believe it will prove itself to be a model to the industry as we continue to capture value from this incredible combination.”

The world’s largest independent in the first quarter closed its $9.7 billion acquisition of Concho, forming a Permian Basin powerhouse that rivals the output of the biggest players in the Lower 48’s most productive oilfield.

Concho, a Permian pure-play, was the fifth-largest producer by volume in the massive field. The combination made ConocoPhillips one of the dominant players in the Permian, alongside the likes of Chevron Corp., ExxonMobil and Occidental Petroleum Corp. With the acquisition, ConocoPhillips’ net acreage in the Permian increased fourfold to 700,000 acres. Pro forma production for the combined company is estimated at more than 1.5 million boe/d – assuming flat production this year.

Lance said Wednesday the $1 billion in annual synergies the company now expects from the deal doubled from expectations when the acquisition was announced in October. The company noted lower senior staff and corporate expenses, as well as exploration cost reductions.

Based on the anticipated deal savings, the company lowered its capital and cost guidance by a combined $300 million. The Houston independent trimmed its 2021 capital expenditures (capex) by $200 million from a prior forecast of $5.5 billion. It also lowered its expectations for adjusted operating costs by $100 million to $6.1 billion.

Lance said ConocoPhillips now owns “a massive Lower 48 shale business.” However, he added, “We intend to run the shale business in a very disciplined manner for free cash flow and full cycle all-in returns, not growth.”

The company increased its 2021 planned returns of capital with the additional $1 billion of share buybacks, bringing total announced returns to about $6 billion, or roughly 8% of its market capitalization, Lance said. The stock repurchase plan aligns with a vow to return 30% of cash from operations to shareholders via buybacks and dividends.

ConocoPhillips had resumed its buyback program in March after a recovery in oil prices proved durable and as its own financial performance improved notably.

Oil prices have since climbed even higher. Brent crude, the international benchmark, eclipsed $75/bbl in June for the first time since prior to the pandemic. Brent prices are up nearly 50% in 2021, reflecting successful coronavirus vaccination programs, rebounding economies across the globe and increased demand for travel fuels.

“We have the most constructive commodity price outlook we’ve seen in a while,” Lance said. Additionally, he added, ConocoPhillips and other exploration and production companies “are benefiting from the great reset of 2020” in terms of cost controls and “continue to exercise discipline.”

Looking to the next 10 years, Lance said ConocoPhillips’ capex is expected to average about $7 billion annually, equaling roughly 3% compounded annual production growth at an average reinvestment rate of about 50%.

The company said its return on capital employed is projected to grow 1-2% annually, with balance sheet strength firmly in focus over the 2022-2031 period.

“Investors have long memories for the poor performance this sector delivered over the past decade,” Lance said. “It’s not a sure thing that discipline will hold across the sector and inflation is rearing its head. And of course, addressing energy transition is rapidly becoming one of the most important issues for the industry. It’s not certain or obvious how these factors play out, but successful strategies are all about making thoughtful, rational choices in the faces of uncertainty.”

ConocoPhillips reiterated its goal to become net zero for operational carbon emissions by 2050.

“We must continue to meet demand on any energy transition pathway through the most disciplined capital allocation,” Lance said. “We must deliver consistent and compelling returns on and of capital, and we must achieve our net zero ambitions…We embrace this mandate because we believe there is a valuable role for companies like ConocoPhillips in the energy transition.”

He added: “We’re in this for the long haul.”