The Lower 48 will again factor heavily into ConocoPhillips’ operating plans this year despite what the company’s chief executive said are “external pressures” facing the industry as the Biden administration appears ready to more actively regulate oil and natural gas operations. 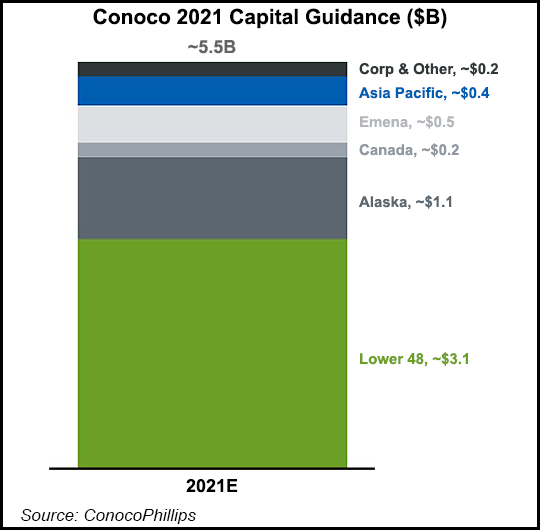 Meanwhile, the world’s largest independent continues grappling with a global economy weakened by the Covid-19 outbreak and plans to move through 2021 cautiously given the pandemic’s impacts on energy markets. Even after a blockbuster deal late last year to acquire Concho Resources Inc., the Houston operator plans to stay in maintenance mode this year and largely sustain 2020 production. The deal closed Jan. 15 to create a behemoth producer in the Permian Basin.

ConocoPhillips laid out plans for a $5.5 billion capital budget this year, versus $4.7 billion of capital expenditures in 2020. Management said production would be flat with ConocoPhillips and Concho’s combined 2020 production level of 1.5 million boe/d.

Since the Concho deal closed after year’s end, ConocoPhillips is only now in the process of integrating the companies and expects to unveil additional guidance in March. As a result, details of the combination were scant during the fourth quarter earnings call on Tuesday.

“We set the capital budget at about $5.5 billion for two principle reasons,” said CEO Ryan Lance. “First, while the macro environment has firmed up recently, we are cautious about the trajectory and the timing of a recovery. Demand recovery is taking longer, spare supply remains and inventories remain elevated. It makes no sense to grow into this market environment, so we’re choosing to stay at a sustaining level for the year.”

“I have to say that we’re not entirely surprised by the announcement,” Lance told analysts during the year-end call. “In fact, President Biden said during the campaign that he would issue a temporary moratorium on new leasing. As for the permitting moratorium, the administration has publicly indicated that this is a temporary pause and that they will continue to issue permits.

“Obviously we hope these temporary actions are resolved in a timely fashion, and we are certainly watching the situation closely.”

Lance said the moratoriums wouldn’t have a substantial impact on ConocoPhillips given its robust global portfolio.

“While we certainly are going to engage to protect our interest, ConocoPhillips has the flexibility, diversity and depth of low-cost of supply and low greenhouse gas (GHG) resources to manage through this issue without materially impacting our plans,” he said.

Environmental, social and governance initiatives also moved higher up the list as the company continues to undergo significant internal shifts given the new administration and the Concho acquisition.

Lance was quick to point out that ConocoPhillips was the first U.S.-based upstream company to adopt a climate strategy aligned with the United Nations climate accord, aka the Paris agreement. The company is targeting net-zero operated emissions by 2050. Lance added that a “low-carbon team” had been formed to study energy transition alternatives, their viability at ConocoPhillips and other energy trends.

“We’re actively advocating for a well-designed price on carbon in the U.S. as we believe that’s the most economically efficient and effective step that can be taken by the U.S. to set the world on a sustainable path to long-term GHG emissions reductions,” he said.

The company heads into a new year after a challenging 2020 in which production volumes and profits declined.

For the full year, production, excluding Libya, was 1.12 million boe/d. After adjusting for acquisitions, asset sales and price-related curtailments of 80,000 boe/d, 2020 production would have been 1.18 million boe/d, or 15,000 boe/d below 2019 levels. Production from Libya was just 9,000 boe/d during 2020 as operations there were limited by political unrest.

ConocoPhillips reported a fourth quarter net loss of $800 million (minus 72 cents/share), compared with net income of $700 million (65 cents) in the year-ago period. The loss was primarily related to lower realized prices and $869 million of after-tax impairments related to the company’s Alaska North Slope natural gas assets and noncore properties in the Lower 48.