A decade’s long strategy unveiled by Houston-based super independent ConocoPhillips is designed to “create value on a sustained level” for shareholders rather than chasing global natural gas and oil volumes, the CEO said Tuesday. 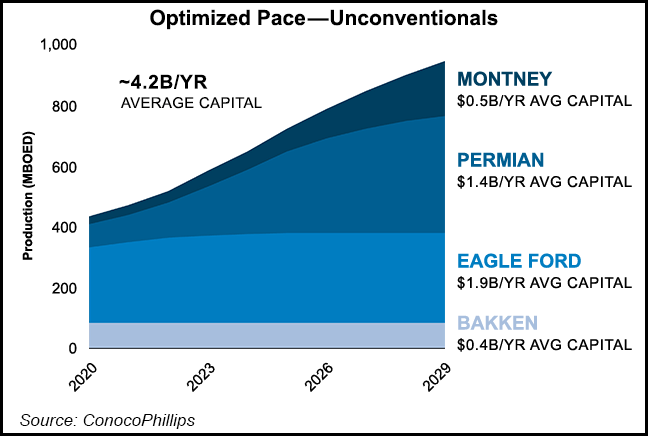 During an analyst and investor meeting, CEO Ryan Lance and his executive team shared their vision for the company for 2020-2029. The ambitious plan over the next decade includes repurchasing $30 billion of shares, or around 48% of the current market cap, and paying around $20 billion in dividends.

The goal is to distinguish the world’s largest independent from its peers, Lance said. It also is designed to encourage investor support for the oil and gas sector, which has faced a beatdown in the stock market this year.

“The industry faces a flight of sponsorship by investors,” Lance said. The oil and gas sector has to overcome a “struggle for relevance unless the industry can create value on a sustained basis.”

Capital expenditures (capex) over the decade are to be limited every year at around $7 billion, about 10% above current levels. Capex this year was set at slightly more than $6 billion. Asset sales also are planned. Over the forecast period, ConocoPhillips expects to increase oil and gas production by around 4% a year on average.

The base plan for 2020 through 2029 is based on $50/bbl West Texas Intermediate (WTI), Lance said. ConocoPhillips wants to transform into a free cash flow generating machine that can withstand volatile commodity prices and a global energy transition to more alternative supply from fossil fuels.

Lance kicked off the presentation using two illustrations that he said, “we can’t ignore.” On one chart, the CEO showed the rocky road taken by WTI prices beginning in 2012, when prices briefly leaped above $100/bbl. Prices then plunged in late 2014 and fell through 2016. Today, WTI is averaging under $60.

What wins in a volatile commodity price environment, Lance said, are “consistent performance across the cycles, resilience to the downside and full exposure to the upside.”

The second chart illustrated the S&P 500 weighting for the energy sector, which stood at about 12% in 2012; today it has fallen to 4%. “What matters” to investors, Lance said, are disciplined capital allocation, returns on capital and responsible execution.

The long-term projection for natural gas prices is an average $2.00/Mcf Henry Hub, COO Matthew Fox said. For global liquefied natural gas (LNG), the company expects prices over the long term to “probably be set by Henry Hub prices and the cost of liquefaction transportation regasification. That’s the basis upon which we think about long-term LNG prices.”

Through 2029, ConocoPhillips’ No. 1 priority is dual: to sustain oil and gas production levels and to pay a dividend. Other priorities are to increase annual dividends and maintain an “A-rated” balance sheet. The company also wants to provide more than 30% of cash flow from operations for total shareholder payouts, as well as ensure its investments are “disciplined.”

For all of its far-flung prospects, around 60% of capex over the coming decade, or on average $4.2 billion/year, is to be dedicated to the four North American plays led by the Eagle Ford Shale, the Permian Basin, Montney formation in Western Canada and the Bakken Shale.

Chasing onshore volumes is not the plan, however, even if commodity prices were to improve, as it’s not a winning strategy, COO Matt Fox said.

“Unfortunately, we know this because we did it,” he said. Drilling in the onshore also is to remain somewhat conservative, with around 20 rigs running overall.

The Eagle Ford is expected to receive around $1.98 billion/year on average. Seven to eight rigs are slated to run in 2020, with a plateau in production expected around 2023. In the Permian, considered the “growing” part of the onshore portfolio, capex is set at around $1.48 billion/year on average, ramping to five-six rigs in 2022 from around three today. The Permian is expected to plateau toward the end of the 2020s.

For the Montney, ConocoPhillips is earmarking around $500 million/year in capex. It expects to raise a second rig in 2023, with a third in 2027. The Canadian operations are seen plateauing toward the early-to-mid part of the next decade. And in the Bakken, $400 million is in the annual budget on average through 2029, with three to four rigs running in 2020 and beyond. The Bakken is “now on plateau.”

The company has holdings across the globe, from Canada to the Lower 48, Alaska, in Colombia and Argentina, and in Europe, the Asia Pacific and Middle East. New ventures are targeting “advantaged” natural gas, as well as Latin American unconventional oil. Three programs are being tested in Argentina, with five tests underway in Norway. Another three tests are being piloted in Malaysia.

On the natural gas front, ConocoPhillips has stakes in 26 licensed LNG trains operating worldwide providing 106 million metric tons/year, or around 25% of global capacity. It has added 50% of capacity since 2015. In addition, the Australia Pacific LNG (APLNG) joint venture with Origin Energy has near-capacity upstream processing, with two long-term sales and purchase agreements in place.

More than 50% of ConocoPhillips’ free cash flow is seen coming from the Asia Pacific/Middle East (APME) region over the next three years, according to W. L. Bullock Jr., who is president of the regional activities.

“We’re producing in five countries,” Bullock said. “We’ve got LNG operations in Qatar and on the East Coast of Australia, and these equities always provide steady production and reliable cash generation.”

The APME assets “contain about 2 billion bbl of resource, or about 15% of the company’s resources under $40/bbl with an average cost of supply of less than $20/bbl,” Bullock said. “This is some of the lowest cost by resource in the portfolio.”

Around 70% of the APME resource base is composed of LNG producing assets. More than 90% of sales volumes in the APME also are indexed to oil, “whether through actual oil production, oil-linked LNG contracts,” Bullock said.

ConocoPhillips also has a “business inside our LNG business,” he noted, through licensing its proprietary Optimized Cascades liquefaction technology.

“We license this technology globally, and over the past 20 years have grown the business to become the second largest liquefaction licensor in the world, but that really doesn’t tell the full story,” Bullock said.

Optimized Cascade projects now “represent about 50% of global newbuild capacity. The business has been a significant cash contributor to the corporate segment, contributing over $1 billion in cash. Now we collect this revenue from new LNG transit commission, so it’s a lumpy income stream, but it is very good value.”

LNG, oilsands and the conventional base development is expected to share around $800 million/year in average capital. LNG and oilsands projects together are expected to “contribute a steady 250,000 b/d through the decade for almost none of the planned capital,” Fox said.

Future conventional targets also are in the mix, with $1 billion/year budgeted for Alaska, Norway and the Bohai and Malaysia phased projects.

The world is facing an “uncertain future,” Fox said. By 2050, there are uncertainties regarding how large the population will be, where the economy will stand, how big global energy demand will be and the impact of energy related carbon dioxide emissions.

Energy price cycles and volatility are likely to continue, the COO said. Based on in-depth modeling, however, ConocoPhillips expects WTI prices to be somewhat sustained, averaging $40-70 through the 2050s.