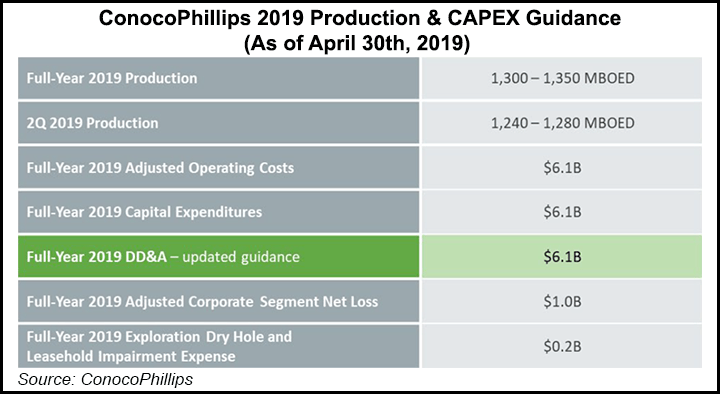 The Houston-based super independent said unconventional production in the “Big 3,” defined as Eagle Ford and Bakken shales and the Permian Basin’s Delaware sub-basin, averaged 326,000 boe/d in 1Q2019, up 30.4% from the year-ago quarter. Eagle Ford production was 197,000 boe/d, with the Bakken at 90,000 boe/d and the Delaware producing 39,000 boe/d.

“While prices have been stronger lately, our guidance items are unchanged,” CEO Ryan Lance said during an earnings call Tuesday. “As we said last quarter, we expect capital to be front-end loaded this year. Production is expected to be back-end loaded as the unconventionals ramp up and we come out of our usual second and third quarter turnarounds…”

The producer can generate free cash flow (FCF) at under $40/bbl West Texas Intermediate, he said. ConocoPhillips reported $1.3 billion in FCF in 1Q2019.

“Our balance sheet gives us flexibility to maintain consistent programs, and we have a 16 billion bbl resource base that averages less than $30/bbl cost to supply…So in case people have forgotten how well we work across prices, that’s a reminder. We’re actually built for price cycles.”

During the quarter, ConocoPhillips began construction at the Greater Mooses Tooth No. 2 project in Alaska and completed winter drilling. It also began completions on its 14-well pad program and spud a nine-well pad in Canada’s Montney formation. The company also reported progress on its exploration program in Louisiana’s Austin Chalk.

ConocoPhillips left its capex budget for 2019 unchanged at $6.1 billion. It also maintained full-year production guidance of 1.3-1.35 million boe/d and estimated Big 3 production will grow by about 19%. The company expects 2Q2019 production to average 1.24-1.28 million boe/d after seasonal turnarounds in Alaska, Canada and Europe.

Lower 48 President Dominic Macklon said Big 3 production is expected to remain flat during the first half of the year before ramping up in the second half.

“First quarter production was actually very much in line with our expectations,” Macklon said. “The primary driver for the lumpiness in the growth profile is the timing of multi-well pads coming online and how those sync up across the different assets, and actually 1Q2019 is a good example of that. Over half of our new wells were brought online toward the end of the quarter during March.”