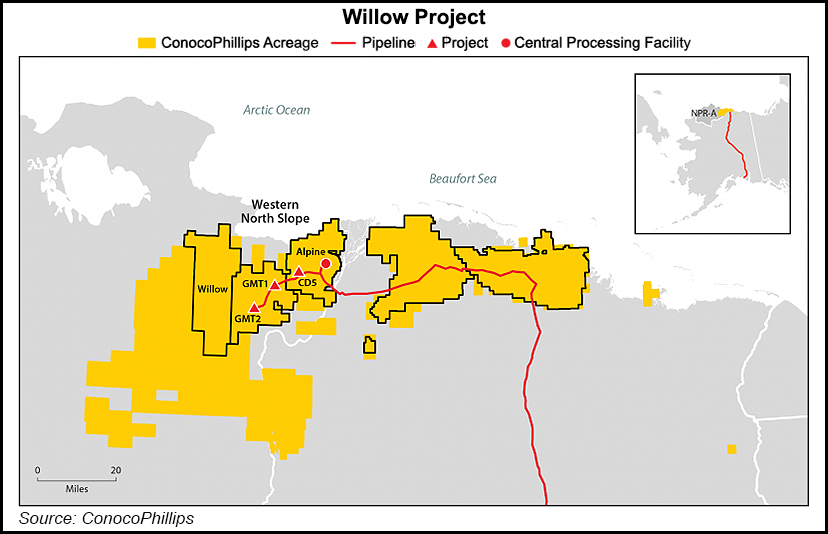 In a written ruling, U.S. District Court Judge Sharon Gleason of the District of Alaska said the environmental impact statement for Willow should have included a quantitative estimate of emissions resulting from oil consumption or it should have explained why the estimate could not be produced.

Additionally, Gleason said BLM failed to consider reasonable development plan alternatives for the project that may have offered better protection for wildlife including caribou in the Teshekpuk Lake Special Area.

The decision was in response to a pair of lawsuits, one led by Sovereign Iñupiat for a Living Arctic and the other by the Center for Biological Diversity.

A ConocoPhillips spokesperson told NGI’s Shale Daily on Thursday, “We will review the decision and evaluate the options available regarding this project.”

The ruling marks the latest roadblock to oil and gas development on federal property, an increasingly contentious issue under the Biden administration.

“We are giving America over to our enemies piece by piece,” he said. “The Willow project would power America with 160,000 b/d, provide thousands of family-supporting jobs, and greatly benefit the people of Alaska.”

Although Willow was approved under the Trump administration, the Department of Justice under President Biden filed a brief in May with the Alaska District Court in support of the project.

Environmental group Earthjustice, a co-plaintiff in one lawsuit, hailed the court ruling. Willow, it said, “would have helped accelerate climate change by releasing enough greenhouse gas emissions to equal that of 66 coal-fired power plants operating for a year.”

Earthjustice attorney Jeremy Lieb said, “We were very surprised to see the Biden administration, which has promised historic progress on climate change, defending this plan in court…” However, the decision “gives the administration the opportunity to reconsider the project in light of its commitment to address the climate emergency.”

He added, “We are hopeful that the administration won’t give the fossil fuel industry another chance to carve up this irreplaceable Arctic landscape with drilling rigs, roads, and pipelines.

“We must keep Arctic oil in the ground if we want a livable planet for future generations.”

ConocoPhillips announced the Willow discovery in early 2017 in the northeastern portion of the National Petroleum Reserve-Alaska. The 22 million-acre tract of federally owned land originally was designated to provide oil supply for the U.S. Navy.

Willow is estimated to contain 400-750 million boe of recoverable oil and gas resources.

The court’s decision follows an order this month by a Louisiana court that forced the hand of the Biden administration to resume oil and gas lease sales on federal property. Lease sales had been paused indefinitely amid a comprehensive review. The Interior Department said it would comply with the Louisiana court’s order, but it also planned to appeal.