Houston-based ConocoPhillips is marketing up to $8 billion of assets, primarily natural gas-rich properties in North America, to make way for more global investments elsewhere, including in Texas and North Dakota, executives said Thursday. 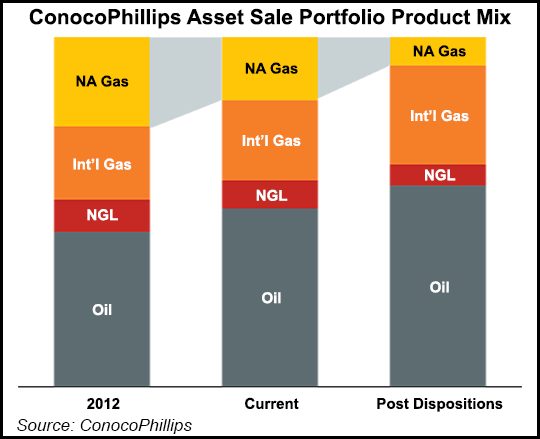 The super independent plans to sell $5-8 billion of properties in its portfolio as it moves toward more onshore liquids and oil projects in the Lower 48, and more gas projects overseas, CEO Ryan Lance said during an analyst meeting in New York City. The exploration and production (E&P) giant also is planning to repurchase at least $3 billion of shares.

“During the past two years, we have significantly transformed ConocoPhillips to succeed in a lower, more volatile price environment,” Lance said. “We’ve lowered the capital intensity and breakeven price of the company, lowered the cost of supply of our investment portfolio, and created strategic flexibility for future price cycles.

“We believe our plan offers a differentiated strategy within the E&P sector that is focused on free cash flow generation and improving returns to shareholders. We have positioned ConocoPhillips to deliver double-digit shareholder returns across a range of commodity prices through a combination of peer-leading shareholder distributions and high-return investments.”

The actions to accelerate “will allow us to achieve our value proposition priorities at Brent prices of about $50/bbl,” Lance said. “These priorities include a debt target of $20 billion, a 20-30% payout of operating cash flows to shareholders, and modest production growth to drive margin and cash flow expansion. In setting out these priorities, our goal is to have strong resilience to low commodity prices with the ability to capture upside during periods of higher prices.”

The management team was coy about which natural gas assets within the portfolio may be sold. However, executives made clear that if they can’t fetch the right price, they’ll keep them. During the third quarter conference call in October the company announced it would shift more resources to the Lower 48 and add five more rigs to its three-rig program (see Shale Daily, Oct. 28).

At the conference Thursday, Executive Vice President Al Hirschberg, who runs production, drilling and projects, outlined the strong production tests and growing output from the Permian, Eagle Ford and Bakken, where improved efficiencies have made a lot of production viable at under $40/bbl. Production in the Eagle Ford during 3Q2016 was 163,000 boe/d, production in the Bakken was 61,000 boe/d and Permian output was 21,000 boe/d.

For 2017, the operating plan includes capital spending of $5 billion, which is 4% lower than this year ($5.2 billion) and less than one-half the amount spent in 2015 ($10.1 billion). Cost reductions in operations have been a big contributor to the lower spending plan as guidance for 2017 production and operating expenses is about $5.2 billion, which results in adjusted operating cost guidance of $6 billion, a 9% improvement from 2016 adjusted operating cost guidance, Lance said.

Spending in 2017 is to focus primarily on “flexible” unconventional development programs in the Lower 48, conventional projects in Europe, Asia Pacific and Alaska, and base asset maintenance. About $600 million is included for exploration, which is primarily focused on unconventional work in the Permian Basin and Eagle Ford and Bakken shales, as well as appraisal of the Barossa discovery and closing out drilling obligations in the deepwater Gulf of Mexico and Nova Scotia.

Estimated production in 2017 now is forecast to be 1.54-1.57 million boe/d, which would be flat to 2% growth from full-year 2016 adjusted for sales. Growth is expected to come primarily from ramping up a liquefied natural gas export project in Australia, oilsands production at Surmont 2 in Canada and Kebabangan in Malaysia, as well as increased activity in the Lower 48 unconventionals, partly offset by normal field decline. The outlook excludes Libya.

“We believe our company offers one of the most unique value propositions in the E&P sector,” the CEO said. “We’ve reset virtually every aspect of the business — our capital program, our cost structure and our portfolio — during the recent industry downturn. Now we’re in a differential position to generate free cash flow as prices recover, and we implement our clear priorities for allocating available cash. In a future of volatile prices, we can demonstrate that our disciplined, returns-focused approach will deliver strong performance for all our stakeholders.”