ConocoPhillips is eyeing higher spending this year than originally forecast to expand development in the United States, with output from the “Big 3” unconventionals alone climbing 26% year/year, the Houston-based super independent said Tuesday. 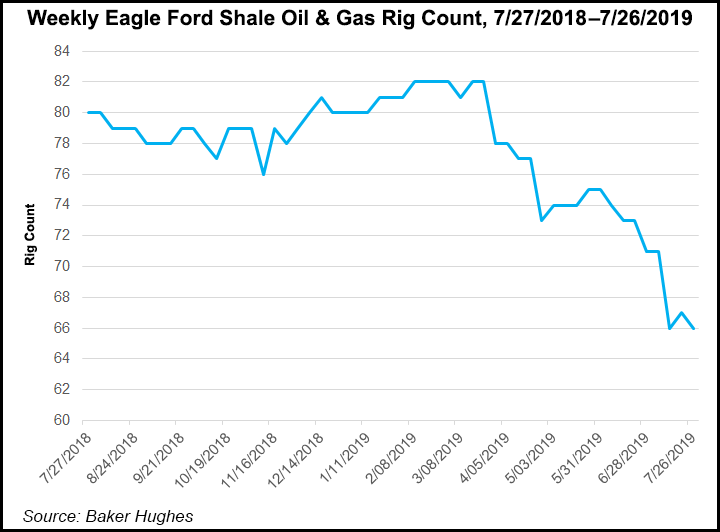 Led by the Eagle Ford Shale, with strong output continuing from the Bakken Shale and emerging production from the Permian Basin’s Delaware, the plays make up the triumvirate of Lower 48 developments for the world’s largest independent, with production from the trio increasing to 367,000 boe/d.

Capital expenditures (capex) for 2019 have been increased by $2 million to $6.3 billion total on additional exploration in South Texas, as well as in Alaska.

While many independents are pulling back, ConocoPhillips has added a seventh rig in South Texas to build the Eagle Ford inventory and optimize production. An eighth rig could be added in 2020, COO Matt Fox said during the quarterly conference call on Tuesday.

“In the Eagle Ford, we just added a rig to optimize production” over the next few years before it is expected to plateau, Fox said. The incremental production rate associated with the new rig won’t show up before 2020.

ConocoPhillips is “looking to optimize the value” of its unconventional drilling program before output in the onshore evens out, he explained.

“We need to add a rig or two to Eagle Ford…maybe the eighth next year,” which is “part of a rational approach to establish the correct plateau rate of unconventional plays.”

ConocoPhillips’ Big 3 assets are in different states of their life cycles.

The Bakken Shale is in “late-stage growth,” with output holding firm at 80,000-90,000 b/d of oil, a rate expected to be steady “for a long time to come,” Fox said. “We don’t intend to see incremental growth from here.”

The Eagle Ford should reach plateau “in the next few years, and this rig addition is in service of reaching that optimum.”

The Permian “is much earlier in the life cycle, so that has significant growth ahead of it,” Fox said. “It will be several years before it reaches plateau.”

Production from the three plays alone now is expected to average 360,000 boe/d to the end of the year, higher than initial guidance of 350,000 boe/d and a growth rate of around 21% year/year.

Less promising to date is exploration in the Louisiana portion of the Austin Chalk formation, Fox said. “It doesn’t look encouraging” yet because of a high water cut. Still, there are other formations within the region that the company plans to to appraise going forward.

The Alaska winter exploration program was completed with “encouraging results on the Greater Willow Area and Narwhal appraisal tests,” while Canadian completion operations on the 14-well Montney pad and infrastructure construction “progressed as planned,” with startup on track for the fourth quarter.

Global output in the quarter totaled 1.29 million boe/d, an increase of 79,000 boe/d from a year ago, excluding Libya, which had output of 42,000 boe/d. Minus a net benefit of 27,000 boe/d from acquisitions/dispositions, production climbed by 52,000 boe/d, primarily on growth in the Lower 48, along with major projects in Alaska, Europe and Asia Pacific.

Between April and June, ConocoPhillips spent $1.7 billion for capex and investments, including $1 million to bolt on U.S. assets. The operator also repurchased $1.2 billion in shares and paid $3 million in dividends funded by cash from operations. Share repurchases planned for this year have been increased to $3.5 billion.