The Republican-crafted economic stimulus package that was approved by Congress last Thursday was stripped of tax credits for renewable energy and subsidies to offset the heating bills for low-income households.

By 81-16, the Senate voted out the $152 billion plan (HR 5140), which builds on the House stimulus package by also including rebates for 21 million low-income seniors and 250,000 disabled veterans and their widows. It specifically excludes rebates for illegal immigrants. The House plan, which is designed to jump-start a lagging economy, would provide rebates to individual taxpayers who earn up to $75,000 and to married couples who earn up to $150,000, as well as provide incentives to businesses. But it does not offer any energy-related incentives.

The House approved the Senate-passed economic plan by 380-34 Thursday night, the last step before the bill heads to President Bush who is expected to promptly sign it.

Senate Democrats reluctantly accepted the GOP package after they lost a crucial vote last Wednesday on their stimulus package, which had included incentives for marginal oil and natural gas wells, additional subsidies for the Low-Income Home Energy Assistance Program (LIHEAP) and an extension of tax credits for renewable wind and solar energy. Democrats were one vote short of the 60 needed to take up their bill.

Senate Minority Leader Mitch McConnell of Kentucky led the Republican opposition to the Democratic stimulus plan, arguing that the energy proposals and other unrelated measures were turning the package into a “Christmas tree” bill that would be vetoed by the president.

Majority Leader Harry Reid (D-NV) agreed to the Republican stimulus package Thursday only after he was unable to find another vote to support the Democratic stimulus plan.

“Democrats want to do more and we were stopped today,” said Sen. Barbara Boxer (D-CA). “We are far from done,” she added, referring to providing additional LIHEAP subsidies, renewable energy tax credits and extending unemployment benefits.

Randall Swisher, director of the American Wind Energy Association, called on Congress to “move quickly to find another path for a rapid extension of the tax incentives” for renewable energy. He said failure to extend the tax credits this year would put 116,000 jobs and nearly $19 billion in investment in renewable energy industries at risk.

The Internal Revenue Service will begin sending out rebate checks after the completion of the 2007 tax season on April 15. Rebates are expected to start reaching taxpayers in mid-May. 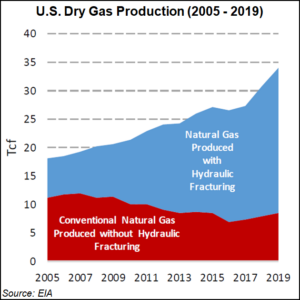 A ban on hydraulic fracturing, a key technique used to complete unconventional oil and natural gas wells, could reverse U.S. production growth and lead the country backwards to become a net importer once again by as soon as 2025, the outgoing Trump administration warned in a report issued Thursday. The Department of Energy’s (DOE) outgoing…