The supply ramp in the Permian Basin, which has overwhelmed takeaway capacity and pressured prices in the region, reached a new threshold this week when some day-ahead deals traded in the negatives, a sign of severe constraints that could last months, said analysts, as the infrastructure buildout catches up with production. 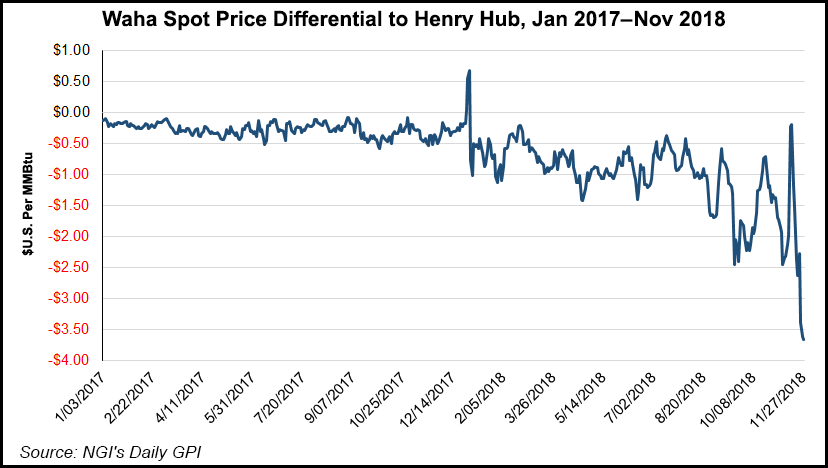 The daily averages recorded at West Texas hubs including Waha and El Paso Permian plummeted Monday, but the averages didn’t capture the full reality of the low prices in the region, where some trades went as low as negative 1.0 cent/MMBtu. That marked the first time NGI had ever recorded negative spot prices in the United States.

Zero and negative prices do not happen often, but they are not unprecedented, noted NGI’s Patrick Rau, director of strategy & research. “There have been several times since 2010 when prices either reached zero or fell into negative territory, especially in the Marcellus Shale and in Western Canada.

“The problem in the Permian today is exactly what has happened at various times in Pennsylvania and Western Canada — too much production chasing not enough pipeline takeaway capacity,” Rau said. “Existing pipeline companies have done what they can to create additional capacity, but there is only so much they can do without building an entire new system. At some point, the dam had to break.”

The spot price woes observed in West Texas Monday worsened in Tuesday’s trading, with at least one reported transaction plunging even further into negative territory as constraints in the Permian appeared dire enough that some sellers were willing to offload their gas for free or even pay to have it taken off their hands.

The dramatic slide in prices has not been contained to the cash market. Forward prices across the Permian have struggled in recent days even as prices in neighboring markets have been relatively supported due to continued cold, according to NGI’s Forward Look.

With new takeaway projects expected to come online beginning in 2019, forward prices appear to strengthen further out the curve. The El Paso-Permian winter 2019-2020 strip sat Tuesday at $2.08, just 85 cents back of Henry.

The dynamics pressuring natural gas prices in the Permian this week could continue for months to come. According to some analysts, the underlying drivers appear to be fundamental and not isolated, a factor of associated gas supply growth — responsive to crude economics and not gas prices — overwhelming existing takeaway capacity as opposed to a disruption to pipeline or processing infrastructure.

“While we’d like to tell you this was some sort of transient, one-off event that led to a day of dramatically low gas prices, that isn’t likely the truth of the matter,” RBN Energy LLC analyst Jason Ferguson told clients this week, referring to the negative spot prices NGI recorded in the Permian region Monday.

“The Permian gas market is flooded with associated gas and won’t see significant new takeaway capacity until the start-up of Kinder Morgan’s Gulf Coast Express pipeline in late 2019. The problem is here to stay, at least for a few months. Take a deep breath if you trade the Permian gas markets.”

The heavy downward pressure on West Texas spot prices has been an ongoing development, and prices came close to negative territory prior to this week, Daily GPI historical data show. Transwestern traded as low as 5.0 cents on Nov. 2, and wide negative basis differentials have been the norm in the region for months.

Year-to-date in 2018, Waha has on average traded about $1.035 back of Henry Hub, compared to an average basis of roughly minus 27.0 cents for the comparable 2017 period, an analysis of Daily GPI historical data shows.

What’s more, the widest negative differentials in 2018 have been observed since September. On the Sept. 19 trade date, Waha prices averaged $2.45 cents back of Henry. With the broad strength observed in physical and futures markets since the start of the heating season, the crushingly low spot prices in West Texas have stood in even sharper contrast. On Tuesday, Waha’s differential to Henry Hub ballooned to a whopping minus $3.67, NGI data show.

“Counter to the broader natural gas market, Permian prices have plunged in recent trading as the Waha hub averaged under $1.00/Mcf over the last three days,” Tudor, Pickering, Holt & Co. Inc. (TPH) analysts said Wednesday in a note to clients.

RBN’s Ferguson said the largest fundamental factor behind the recent trends could be Plains All American’s Sunrise crude expansion, which recently increased oil takeaway from the Permian by around 300,000-350,000 b/d and could be driving growth in associated gas volumes.

“By our estimate, November natural gas volumes are currently around 8.8 Bcf/d and are set to increase another 0.2 Bcf/d in December, but that estimate could prove low based on our understanding of the potential impact from Sunrise,” the analyst said. “Even at just 0.2 Bcf/d, that’s more than enough new supply to overwhelm the one brownfield takeaway project coming in December — the 0.16 Bcf/d Old Ocean project,” which is under construction by Energy Transfer LP and Enterprise Products Partners LP.

Still, while production has been on the rise in the Permian, the rate of supply growth hasn’t matched the rate of decline in prices, according to Genscape Inc. senior natural gas analyst Rick Margolin.

An emergency management official in Pecos County confirmed to NGI that an explosion occurred around 10:15 a.m. local time Friday near the Waha plant near Coyanosa, TX.

Energy Transfer spokeswoman Alexis Daniel also confirmed the explosion. “The area was isolated and contained and the fire was allowed to safely burn itself out,” she said. “We are currently conducting our investigation and are working on the needed repairs. We were able to divert much of the gas to other facilities in order to minimize disruption to deliveries.”

As of Wednesday, Margolin said it wasn’t clear whether Energy Transfer had completely restored operations following the explosion. “There has also been a marked uptick in flaring throughout the basin through this month,” he said.

Genscape’s Spring Rock production estimates on Wednesday showed production volumes near 8.6 Bcf/d, with the previous five days posting volumes well above 9 Bcf/d. That’s about 150 MMcf/d higher than October 2018 volumes and close to 1.6 Bcf/d more than volumes recorded in November 2017, according to Margolin.

TPH’s supply model is forecasting 2.2 Bcf/d of residue gas growth between now and the start up of Gulf Coast Express, which is set to begin service next October and would move gas supply to the Texas coast.

In the interim, TPH analysts also viewed the Old Ocean as likely to “have little impact, as its 160 MMcf/d equates to less than one month of run-rate production growth.”

A “more meaningful” bump to takeaway capacity should come from the expected completion in March of Fermaca’s La Laguna-Aguascalientes and Aguascalientes-Guadalajara pipelines,” which would connect Permian gas exports to industrial demand in central Mexico.