Despite takeaway constraints in the Permian Basin, Concho Resources Inc. unveiled a capital program of $3.5 billion at the midpoint for 2019, up from $2.55 billion this year, with most of spend devoted to large-scale projects and a 25% exit rate increase in crude oil production. 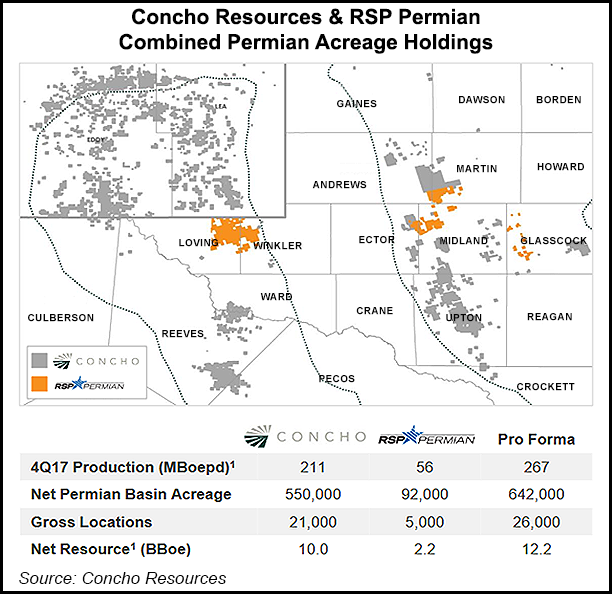 The Midland, TX-based independent, the first Permian pure-player to announce its 3Q2018 earnings, reported wider losses in net earnings and derivatives compared with the year-ago period.

During an earnings call Wednesday, CEO Tim Leach said 2019 activity is based on a West Texas Intermediate (WTI) average oil price of $55-60/bbl.

“We expect more volatility, not less, in oil prices,” Leach said. “We think it’s better for our people, our partners on the service side, and the efficiency of our program to be a steady ship. Planning in this range allows us to prudently step up our capital spend, deliver efficient oil growth, provide shareholders a return of capital and have free cash flow upside.”

Concho would not change its 2019 capital program “based on near-term fluctuations” in WTI prices, even if they ranged from the mid-$60s to the mid-$70s, he told analysts.

“Quite frankly, we are kind of planning for [higher oil prices]. That was the cash flow upside that we see and 2019.”

Moreover, management stressed its planned $3.5 billion spend for 2019 would be within free cash flow, and announced it would initiate a regular quarterly dividend of 12.5 cents/share starting in 1Q2019. Both of these were likely “music to ears of the investment community, as the buy-side has been rewarding producers that exercise spending discipline and return more cash to stakeholders,” noted NGI’s Patrick Rau, director of Strategy & Research.